The journey of a mobile bookshop 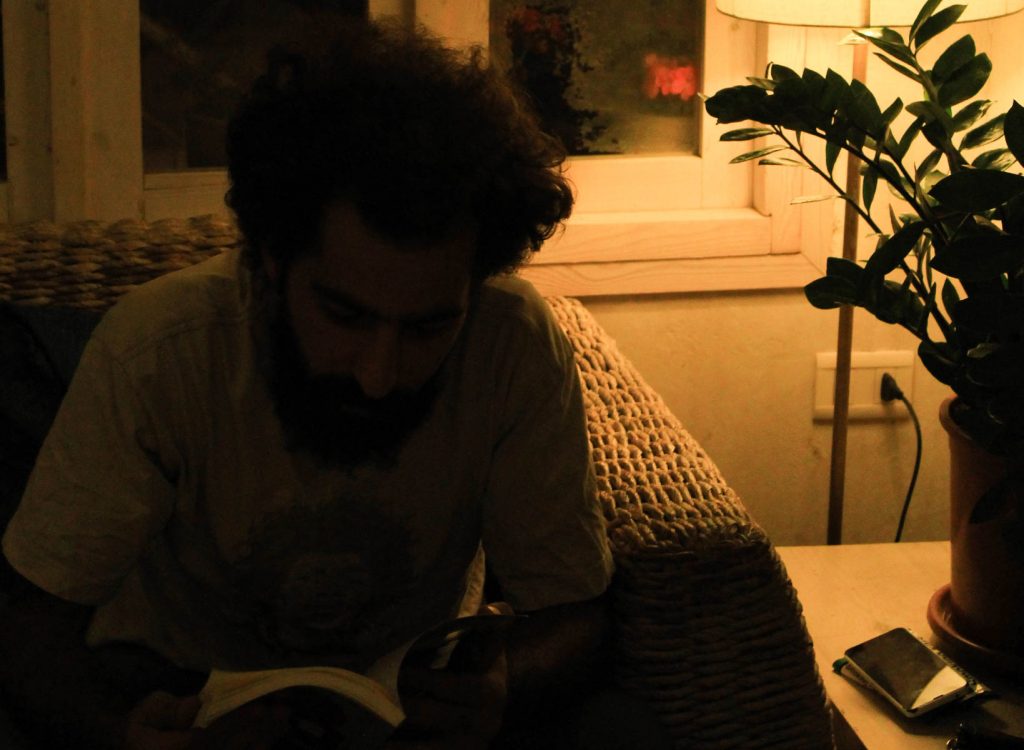 The journey of a mobile bookshop

“I had no more money, I had this crazy idea of taking my books; well actually I only had five books. Gas in my car and books. That’s all I owned,” 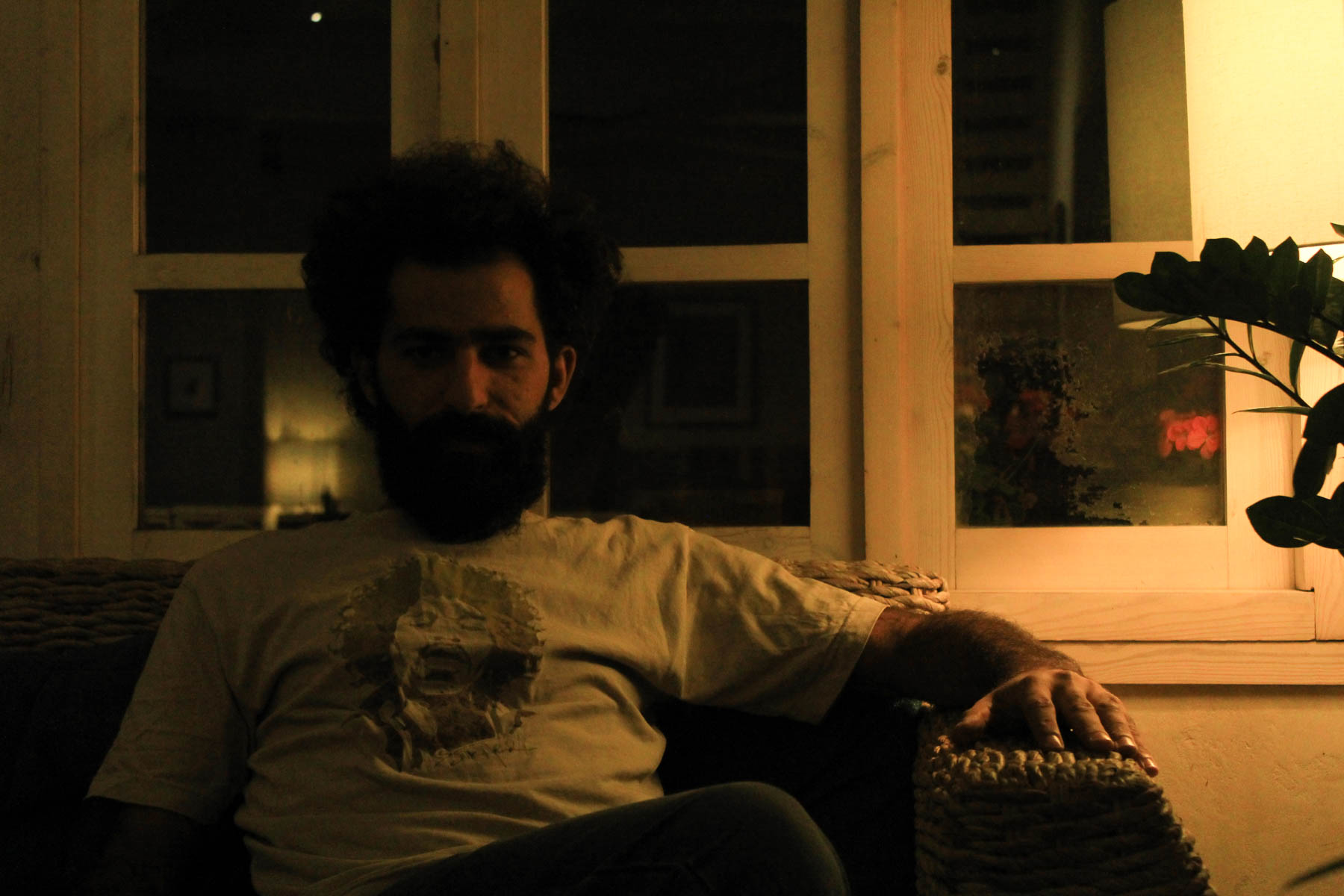 Ghaith Bahdousheh – owner of mobile bookshop Books on the Road

One Jordanian is looking to change the mindsets of his community through the power of reading and his 1974 Mercedes.

“Reading is basically the first gateway to change. If you don’t read you will not evolve intellectually and our society here has really neglected the fact that they should really educate their kids about reading,” Ghaith said.

“I hope the results of this entrepreneurship project will bring change to the society that I live in in the beginning and be an influencer in this field.”

Ghaith Bahdousheh is a 26 year old Madaba local that sells books on top of his car. Books on the Road was started as a form of initiative to fund his bookshop in Madaba. 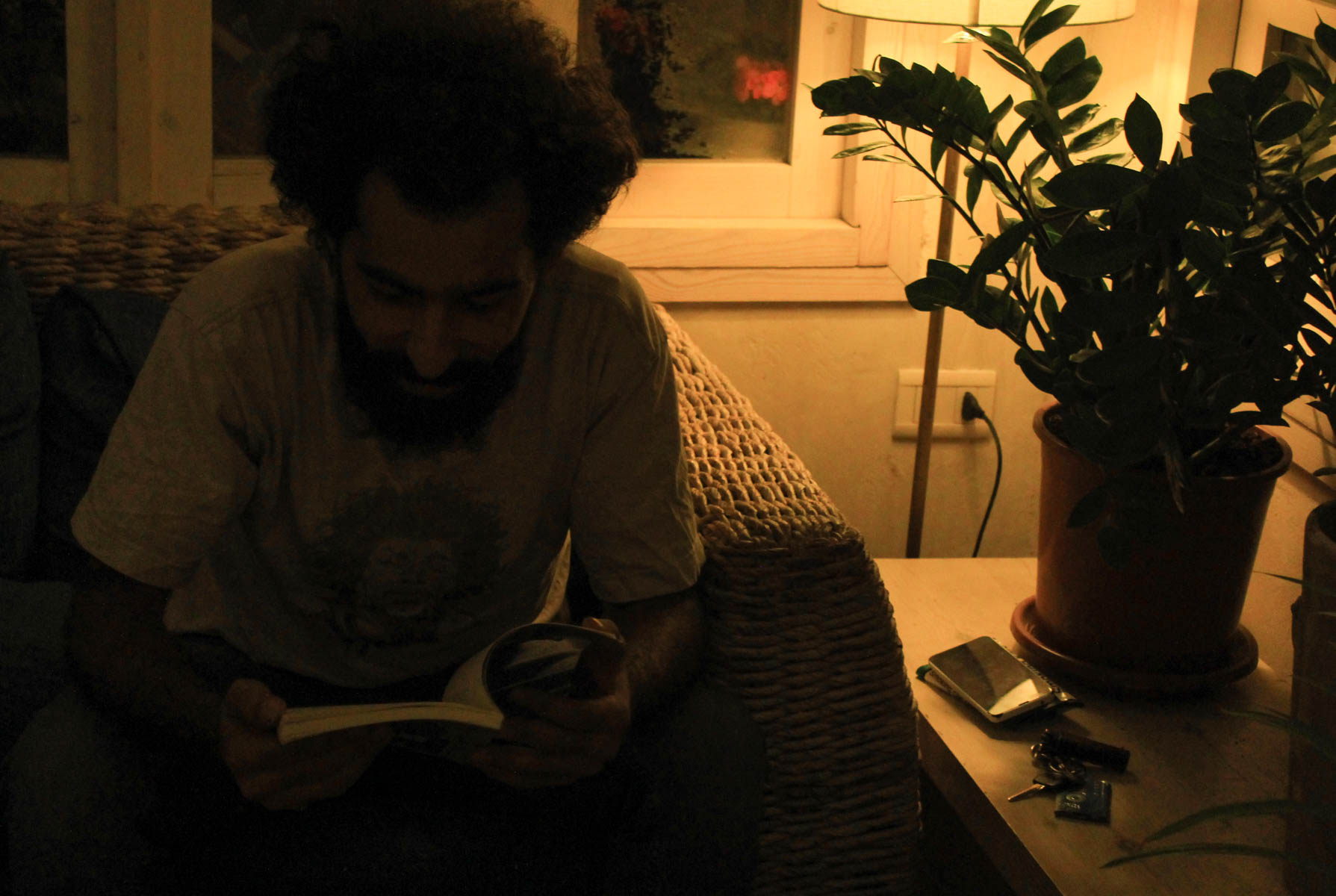 Ghaith is determined to establish a reading culture in Jordan

“I operate a mobile bookshop which is basically my personal car,” he said.

“I take it and I park it in specific places in Amman and I spread books all over the car and it becomes Books on the Road.

“It’s an initiative that I started on the 19th of February 2016 this year, that I started to help finance a project of mine in Madaba, which is a social activation.”

According to the Jordan Times, Jordan’s illiteracy rate in 2015 was one of the lowest amongst the region at 9.1 per cent for people aged 13 and above.

“Basically I gave my resignation from the corporate guys I use to work at to follow my dreams,” he said.

“So I quit my job on the 1st of January. I was a freelance and I started doing what I wanted to do.

“So one of them was establishing a bookshop where I lived, because there are none.”

“You cannot say that there are no readers at all, there are but the percentage of readers in our nation is really really low,” Ghaith continued.

“It’s the lowest since the country got established – which is really sad.

“If you look at the terms, the first King of Jordan wrote five books, the second one died – very young very fast, and the third one also wrote a lot of books.” 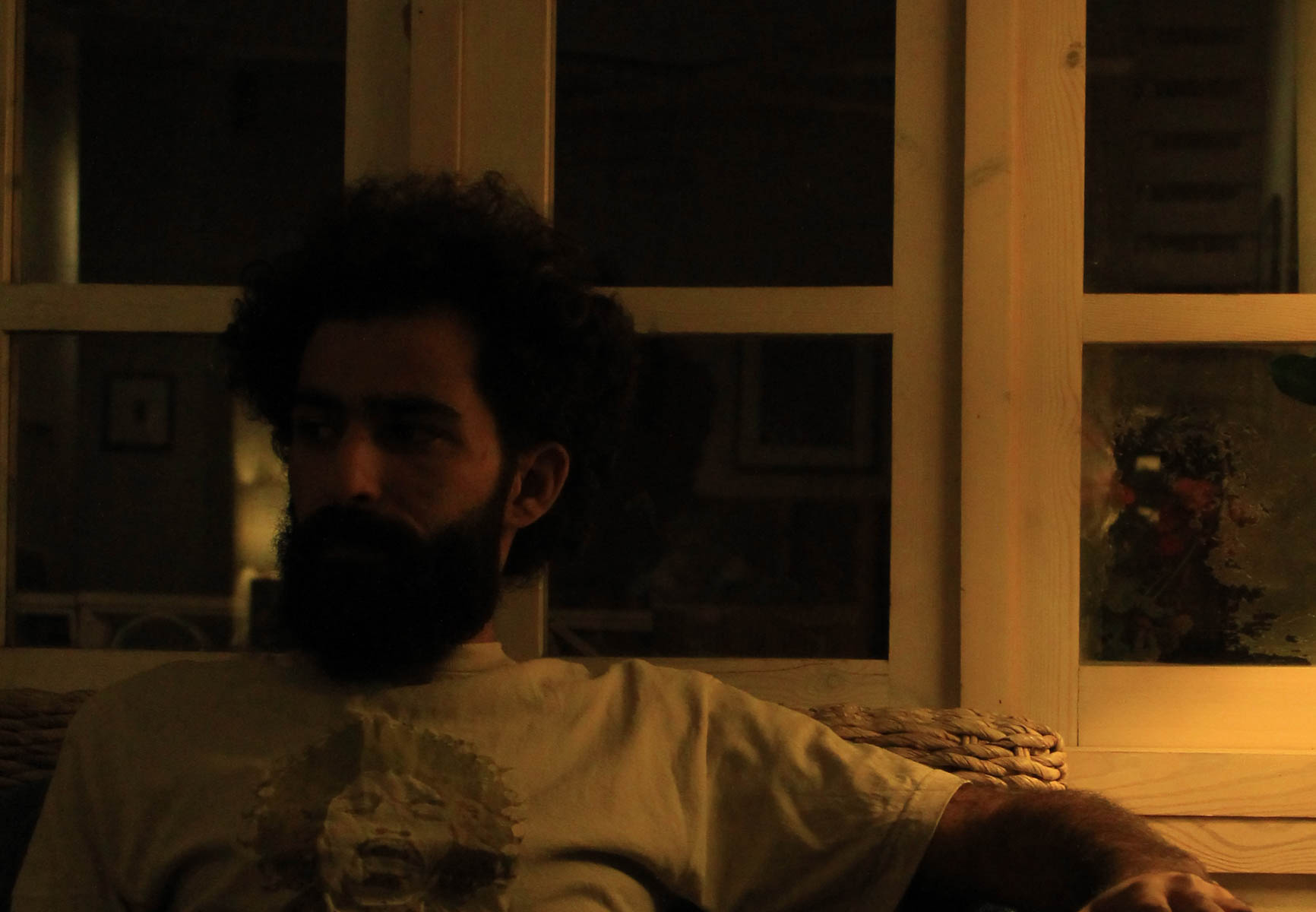 Ghaith said he started the idea of Books on the Road after lacking to fund enough money for his bookstore.

“When I started the project, it started in Madaba,” he said.

“It started with me renting a space to prepare it for a bookshop.

“I had no more money, I had this crazy idea of taking my books; well actually I only had five books. Gas in my car and books. That’s all I owned.

“And I needed a solution – I needed a drastic solution, I needed money. And how to get money?

“I didn’t really want to borrow money from anybody or be in that situation where I had to tell people that I needed money and take it from them; and be tied financially to anybody even a bank.

“People loved it, because they never saw something like this.”

Perks of owning a car

“It’s hard to change mentality and it’s an intangible value that needs to change, but it depends on the person himself or herself so I don’t expect all of them to change but at least I expect one out of 100,”

Ghaith felt his Books on the Road provided a different view on selling books, especially for the people in Amman. 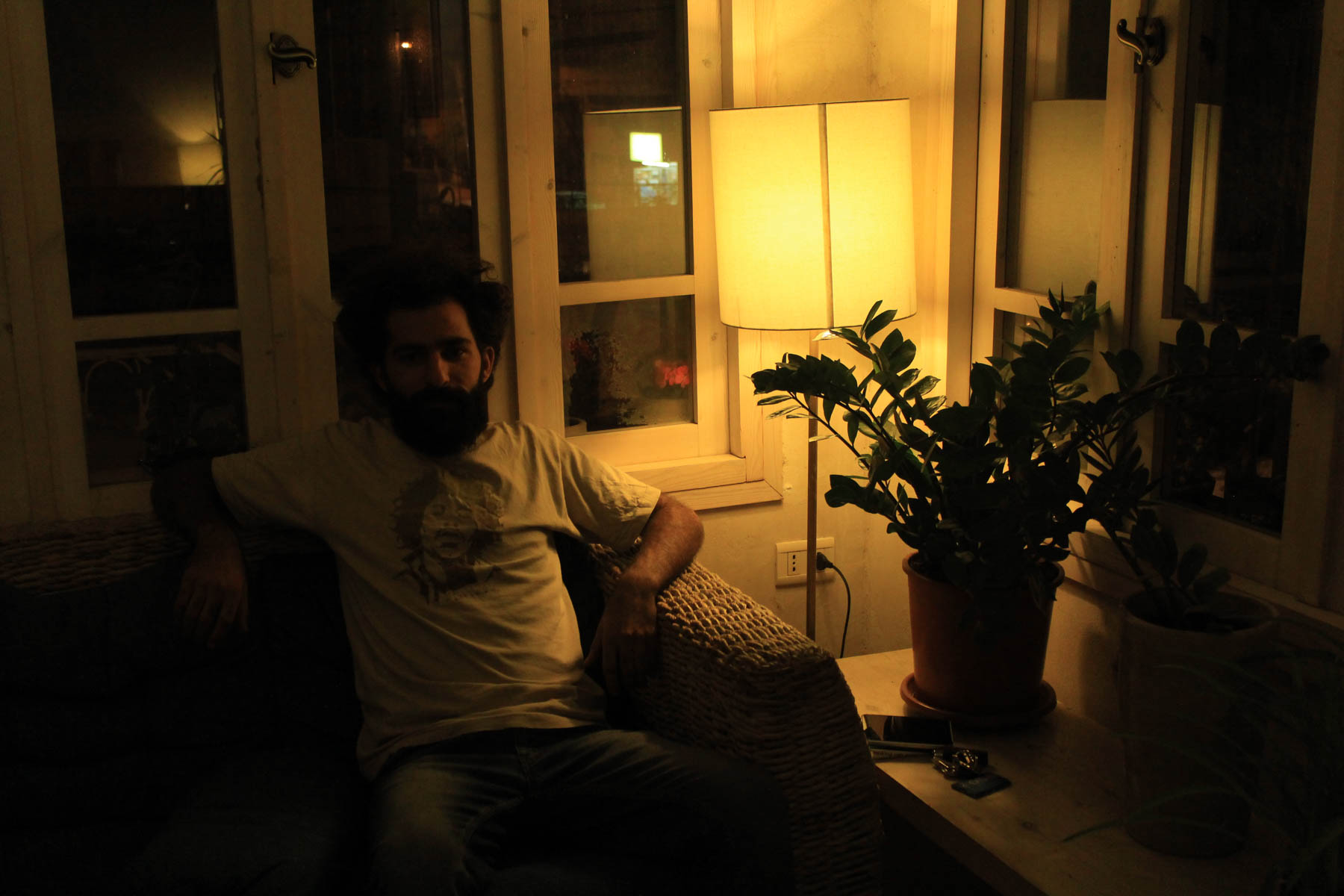 “It’s unique; the presentation of the books is different because I put them on my car and my car is a 1947 year old Mercedes, so basically it’s an old car and I have only used books,”

“Sometimes I buy some new just to keep up with the demand but most of the books that I have are all part of people, where people used to own these books and they gave it to me from their own library.

“Maybe inside one of the books you would find a note in them or a bookmark; passing knowledge of passing books. So people pass it to me and I pass it to others.”

Many people are often confused about the display of Books on the Road.

“A lot of people find it bizarre,” he said.

“That is usually what people ask when they first see it – ‘what is going on? Why do you have books on your car?’

“I basically tell them the whole means of this initiative and they really find that the initiative is really cool; they really like the idea that it’s encouraging reading.

“So a lot of people who don’t read come just because they are a little bit curious, then they probably would tell their friends and change their minds and start reading.

“Of course not all of them.

“Some of them pass by with a cynical look on their face that ‘ok, cool, bas, I’m not going to read. I don’t even read school books.’ This is what they told me.

“It’s hard to change mentality and it’s an intangible value that needs to change, but it depends on the person himself or herself so I don’t expect all of them to change but at least I expect one out of 100.” 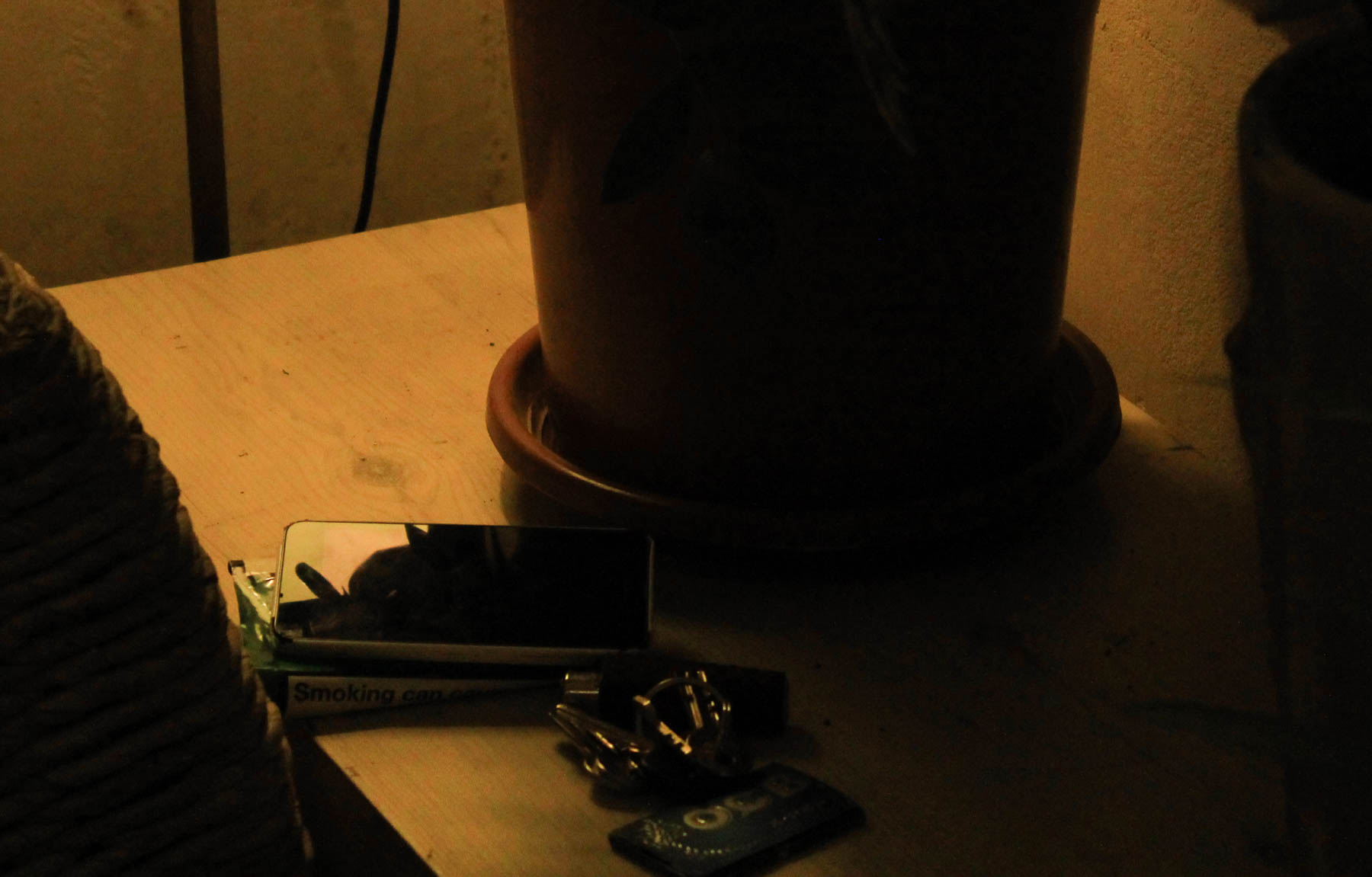 Through the use of his car, he is hopeful more people would be more interested in the unique display

Ghaith felt this initiative created excitement amongst young people in Amman and was hopeful towards the reading culture in Jordan.

“Since I’ve started, people’s faces – their expressions when they see the car – they really enjoy that the books are on the streets,” he said.

“A place that really need a reading culture.

“Really need that type of stuff to be happening right now.

“Most of the young generation are kind of lost with technology with their own personal struggles or whatever and all that negligence in school; they kind of are keen to the idea of being a reader or an intellectual person.

“Someone with an education but not a school education, a book education.”

Ghaith said it was never easy to do this project, having faced a few challenges along the way. 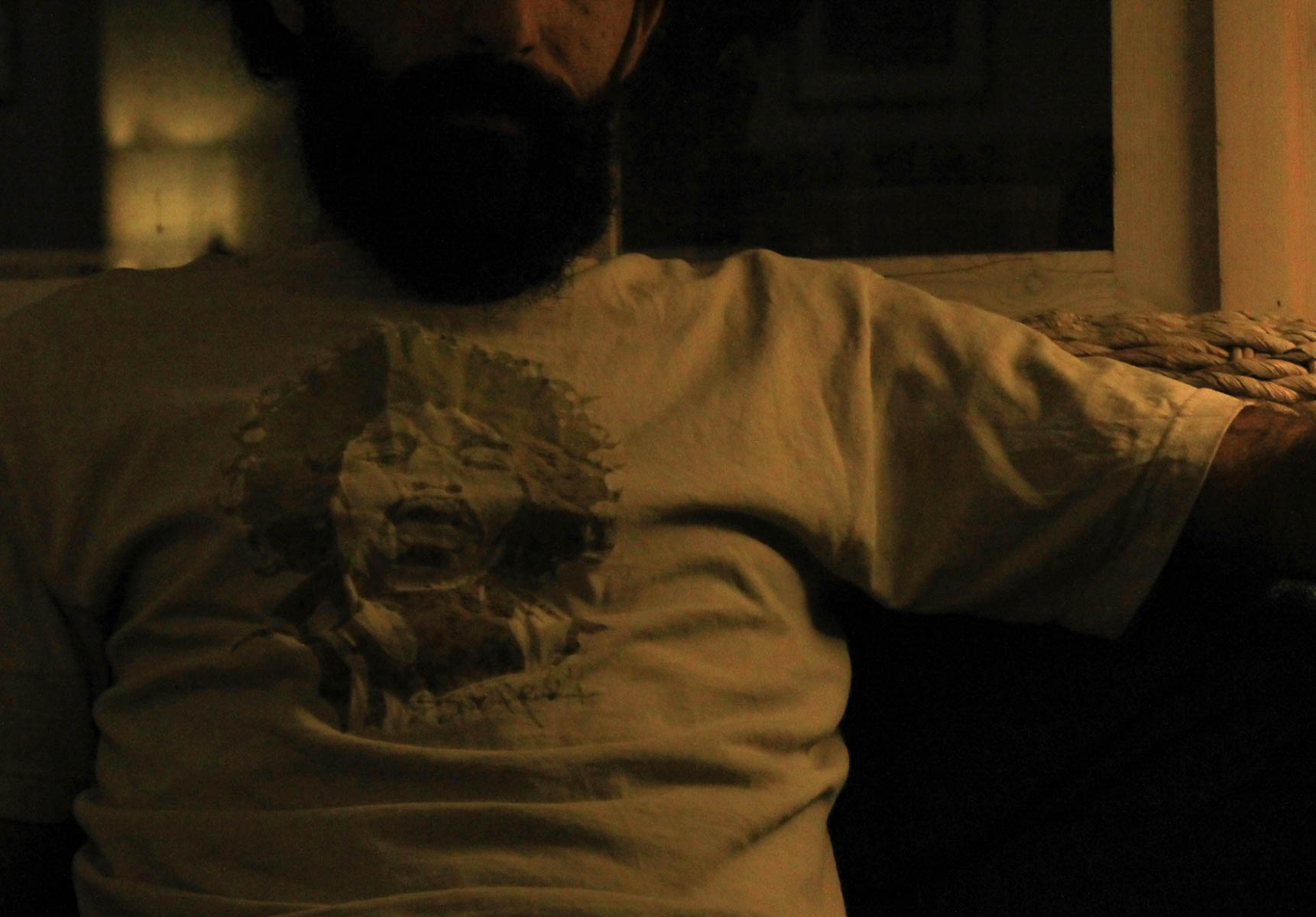 By finding a loophole within the system, Ghaith managed to legally find a way to sell books from the streets

“I struggled a lot with the municipality of Amman,” he said.

“In the beginning with me putting books on the car and they started requesting that I start decreasing the books, but I did not listen to them.

“I stopped them and I talked to them and I told them everything about what’s going on and after that I convinced them.

“My biggest fear was actually because I was selling it on my car so it’s bastla and in Jordan bastla means illegal.

“So I was kind of afraid that I would have problems with people, that the police might arrest me and confiscate all my books, but I found a legal gap which is I’m not putting them on the streets per say, I’m putting them on my car which is my own personal space.

“So there is a legal gap there and they cannot touch it.”

“All of us are – meaning, I conclude every human being on this earth – that does not like the way things are going and all of us aspire for change,”

“Kawon is a word in Arabic that means universe. The bookshop is a social active bookshop. It’s a cultural space for youths in Madaba.

“It’s a place where healthy exchange of ideas happen.

“Anyone can come with an idea and seek the implementation of that idea and see whether it will be possible to implement it in real-life; and of course, there needs to be social benefits from the ideas that happens.

“So it’s a place where I hope more initiatives will start and more change will start.” 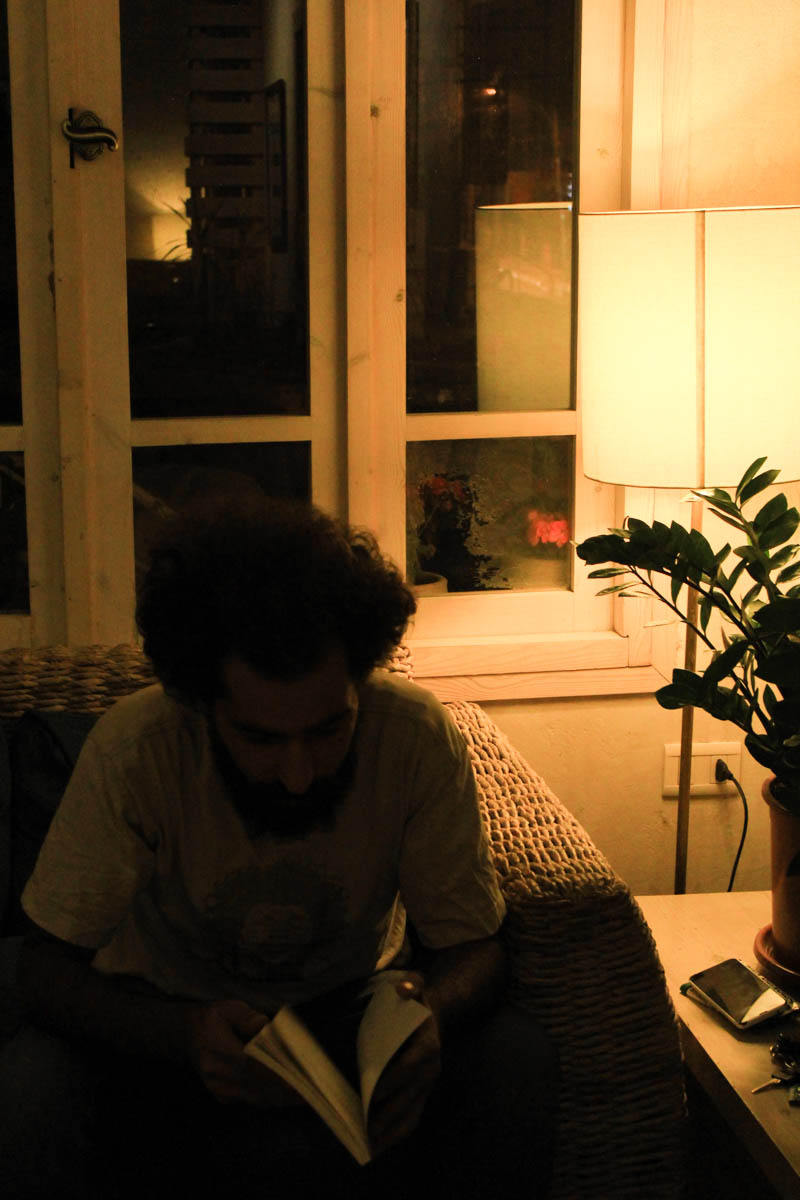 Ghaith finally managed to create his bookshop – Kawon – in Madaba

Ghaith is determined to influence the reading culture in Madaba. Creating a space that will not only encourage people to read more but also to create intellectual engagement.

“What can we do for our town to make a little bit of change in the mentality of people, to improve people’s lives.”

“There is one public library in Madaba, which is operated by the municipality of Madaba. Unfortunately, that library is out of date,” he said.

“It is not updated at all; there are less books every year – which is really sad, and bad management; it’s not a healthy environment at all.

“There are no other except that public library and the library does not provide any new modern books or any books for any modern writers.

“I’m trying to build a bookshop where people can buy books and when I say ‘buy’ people will value a book when they buy it rather than when they borrow it, because it’s their own money paid.

“Of course, the bookshop will contain books that are not for sale – only for borrowing. These books are very old; they used to be part of the British Mandate Library in Jerusalem.

“So I preserved almost 200 of them and the rest of the books are from a Library located in downtown Amman – Khazanat Al-Jahid.” 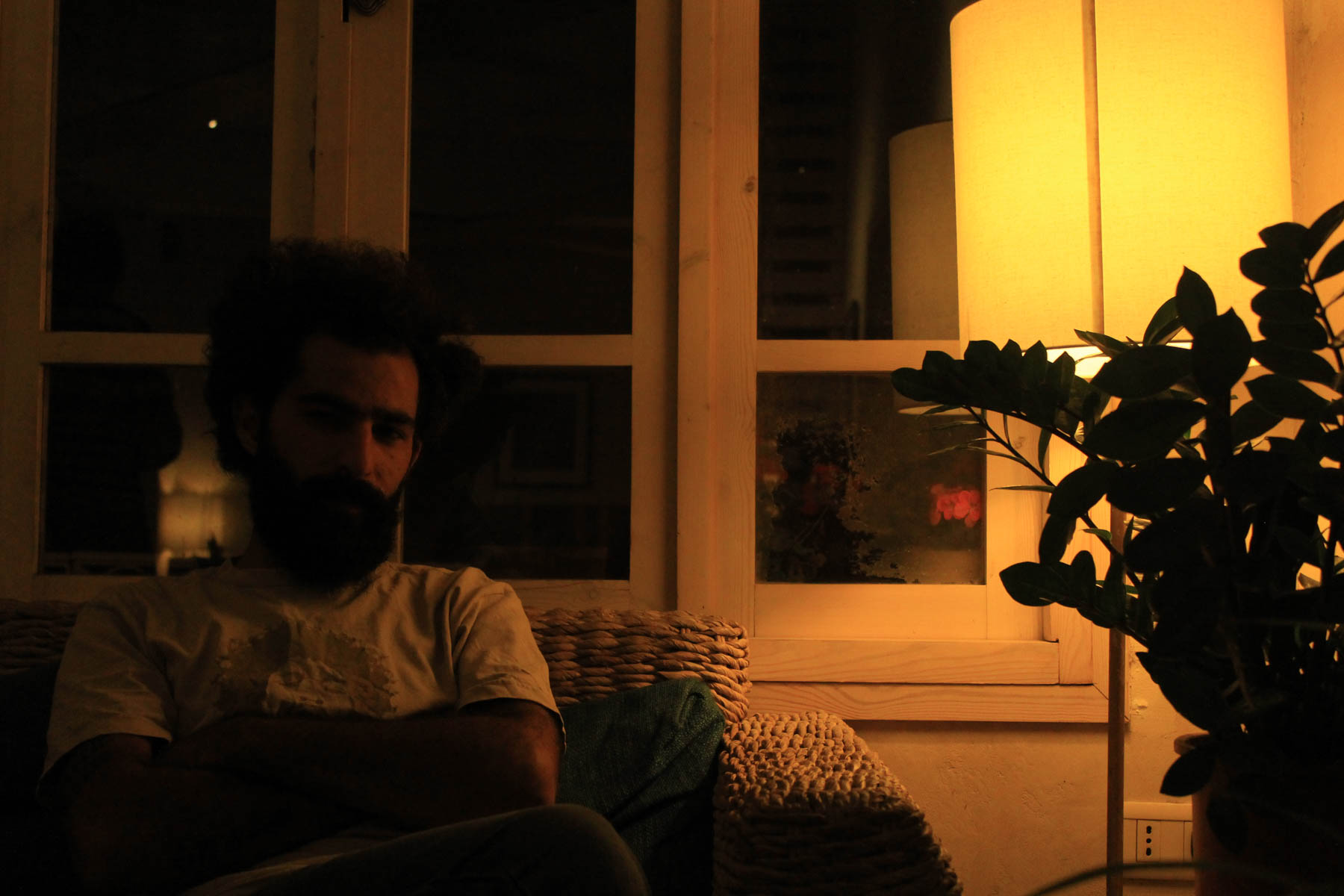 Kawon works as a secondhand bookshop where most of its books comes from donors, however, Ghaith felt positive about the support he was receiving about Kawon.

“A lot of people donate their own books. I buy books of course through flea markets, Friday markets, anywhere I can get,” he said.

“Of course I go to publishing houses to obtain more than books, new prints; to keep up with demands.

“Since I’ve started, I’ve worked with a lot of volunteers, I have a lot of projects too, so a lot of people know me.

“I did a lot of events, I did five events and had over 30 volunteers helping me out in this project.

“The reputation that the initiative – Books on the Road – built is really strong now and it’s capable of influencing and attracting a lot of young people.”

Ghaith felt positive that there will be change amongst people; advocating for a change in society.

“All of us are – meaning, I conclude every human being on this earth – that does not like the way things are going and all of us aspire for change,” he said.

“We’re really keen for it – we really want it, but we don’t realize that it starts with us first.
“So if you really want to change the world, change yourself first and you’ll see the results.” 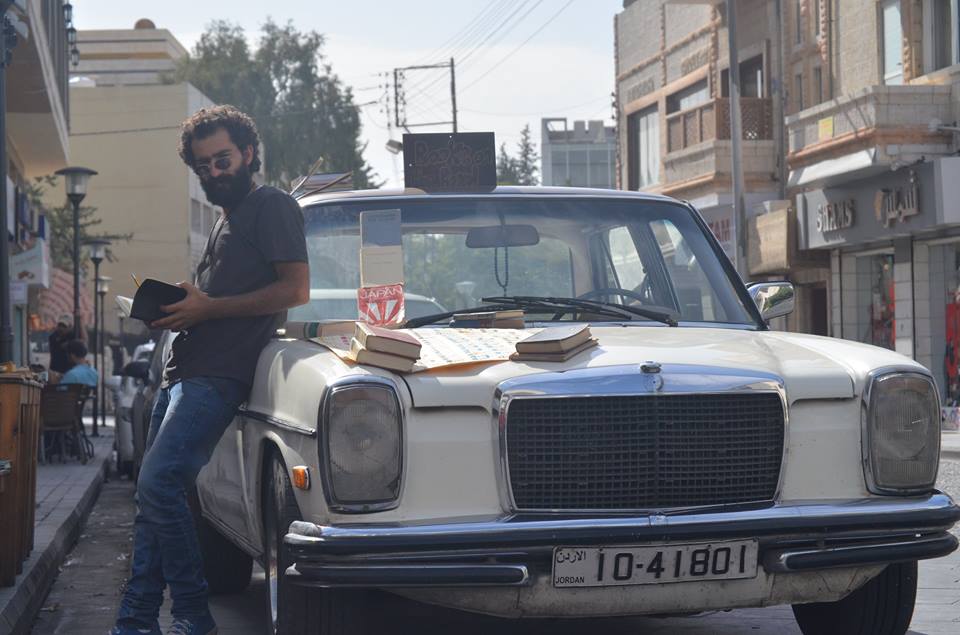 Ghaith – the Books on the Road guy. Photo by Ahmad Shaman Obeidat 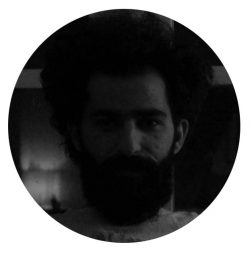 Kawon is now up and running – established as a social bookshop, where most of the books come via secondhand from donors. The initiative and bookshop were both started in the hopes to encourage more people to read in Jordan and create a reading culture – especially in Madaba.

Please show your support by checking out Kawon’s Facebook page or do drop by and check it out for yourselves!