Expanding childhood education with coding: the story of two mothers 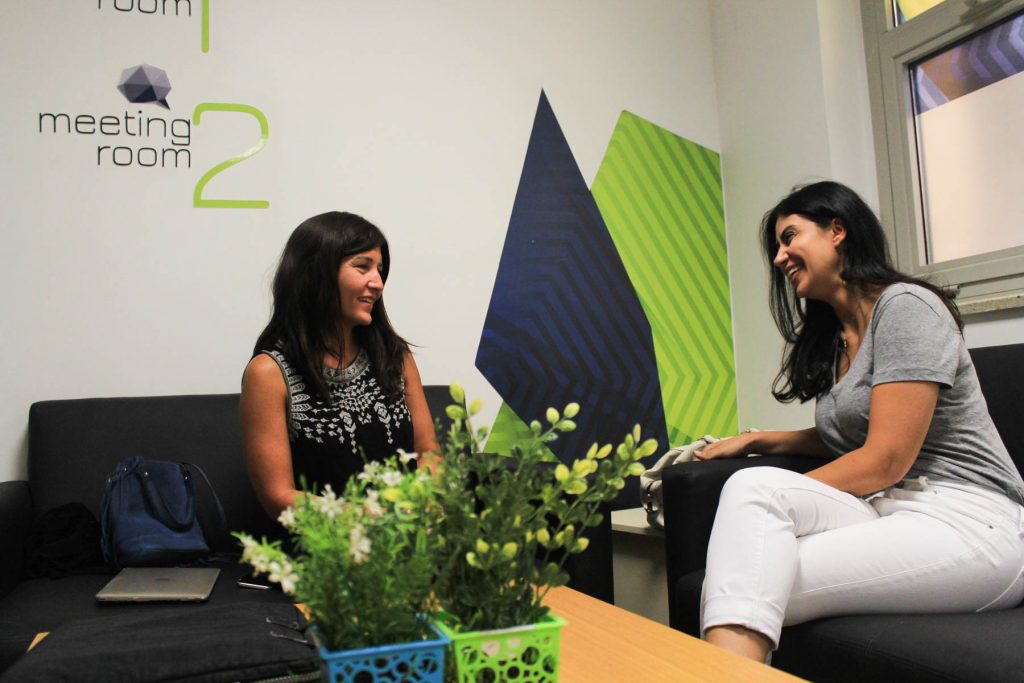 Expanding childhood education with coding: the story of two mothers

“As you know, in the 21st century, to be able to survive in this world where everything is written in code — if you don’t know how to read or write in code, it’s as if you’re illiterate.” 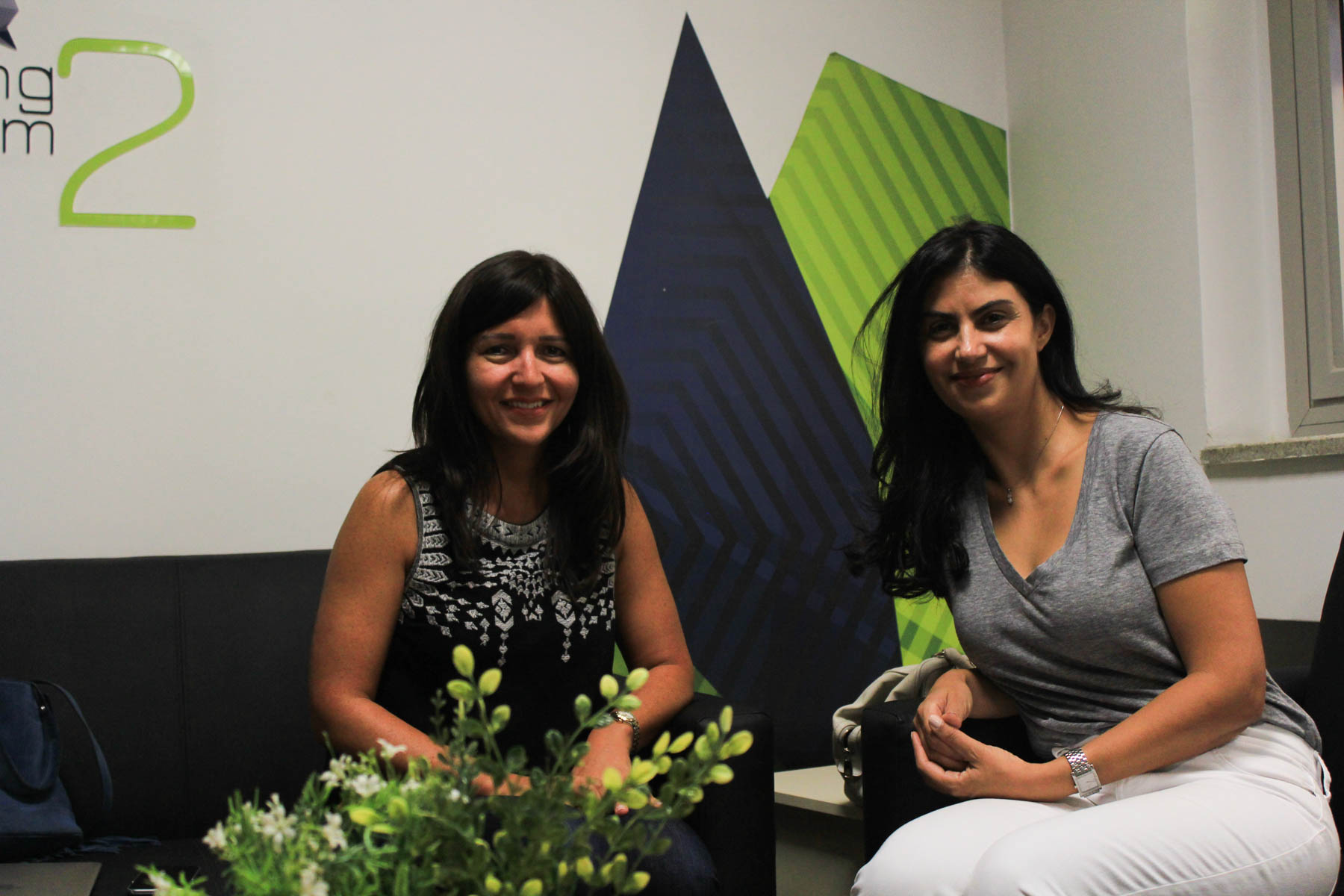 Two women aim to reduce the education gap for children through the use of coding.

Jida Sunna and Ruba Asfour are founders of an education company called the Coding Circle that focuses on teaching coding towards school children — whether as after-school activities or summer programs.

“Our company is called the Learning Circle what we actually do is we give courses to kids to enrich the learning experience,” Jida said.

“What we focus on is coding, but we also have other programs like entrepreneurships or design, etc.”

“As Jida said, we focus on coding,” Ruba added.

“We talk about coding for kids; we teach them in a way where they learn it as if they were adults.

“So we don’t use simplified methods, so if they finish all the courses — we start with beginners then intermediate then advanced — then hopefully they can actually work with it and get a job with it even if they don’t go to university. 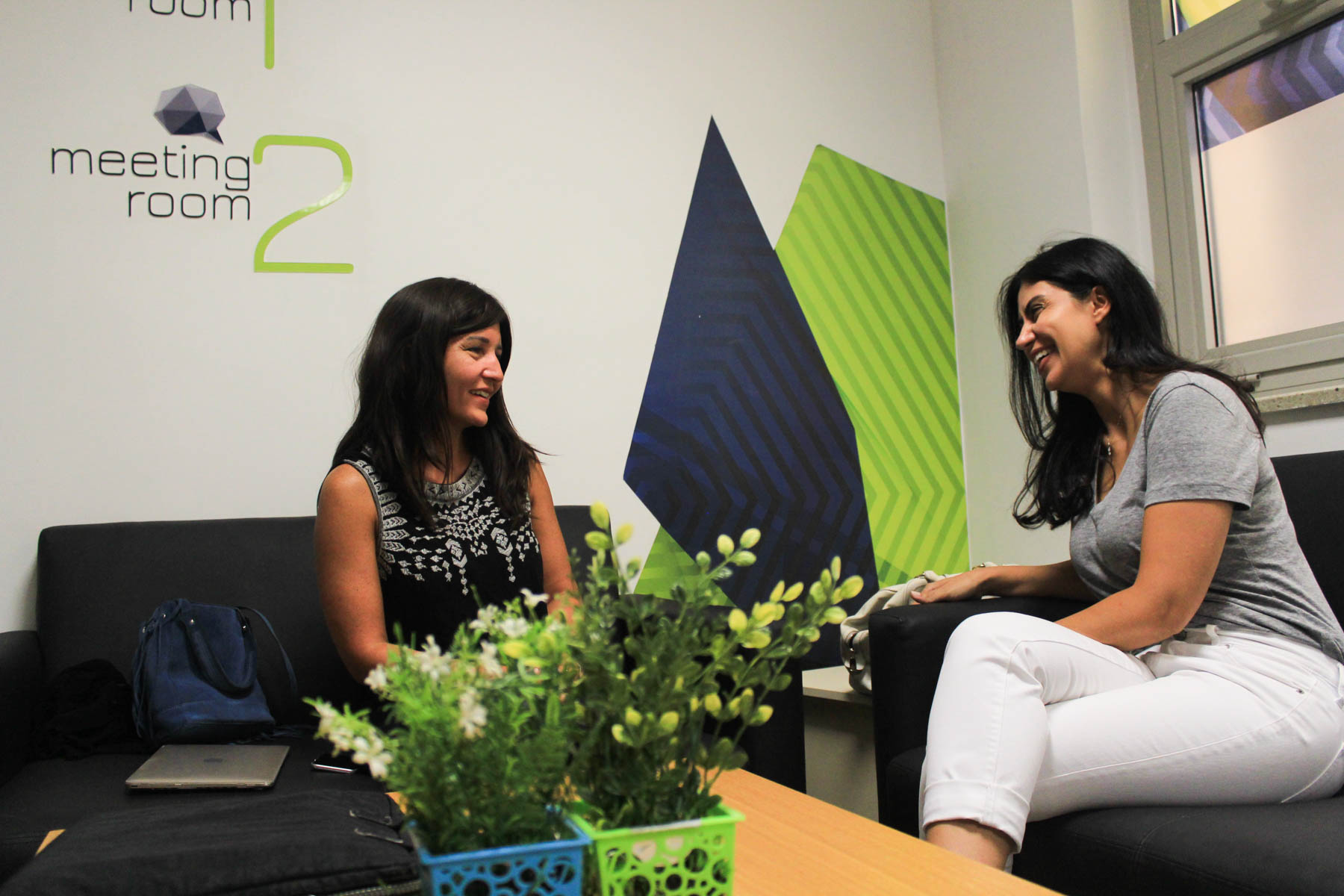 Jida and Ruba felt there needed to be more relevance within the education system in schools.

“As you know, in the 21st century, to be able to survive in this world where everything is written in code — if you don’t know how to read or write in code, it’s as if you’re illiterate,” Jida explained.

“So no matter what you’re going to work in in the future, you need to have some background in coding.”

As parents, both the ladies wanted the best for their child’s education, which led to the initiative.

“Both of us are parents so we see what the schools in Jordan have to offer — which some schools are really excellent but we see where there’s a gap,” Jida said.

“We feel that we need more skills to be learned in this 21st century.

“It’s very important to learn entrepreneurship, design skills, and sometimes we do creative writing workshops like from an author in Jordan talking about how to write an actual story, things like that.

“It’s not really defined but we’re always on the lookout for things that will enrich the learning experiences of kids.”

Both the parents felt technology had become a core value within society today.

According to TIME Magazine, venture capitals were pouring 11 billion USD into healthcare companies in 2014 — most of which were used for the developments of the technology sector within the industry. 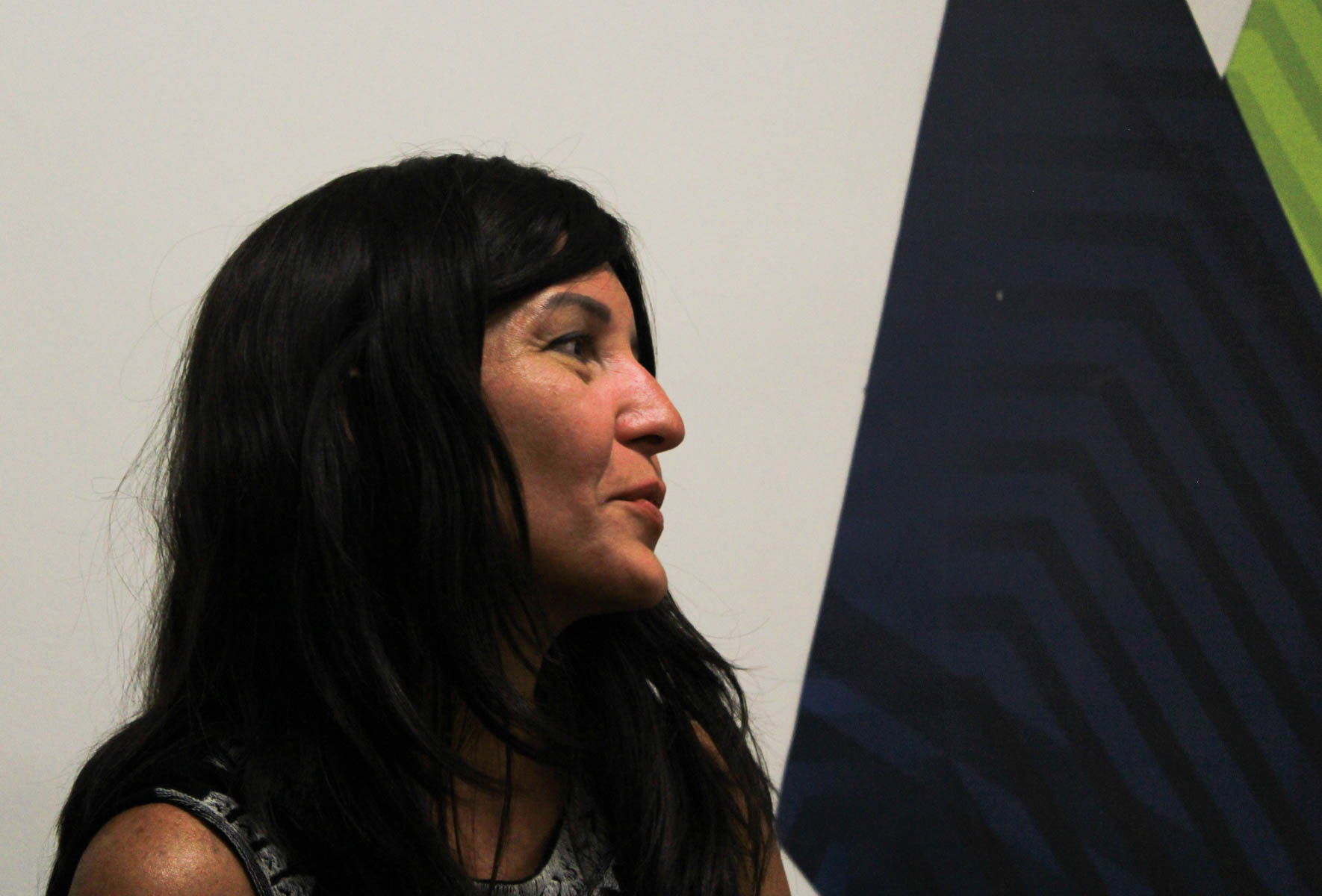 Ruba stated her concern for a more technology-based education

“Everything is run by technology these days and you have to have a basic understanding [in coding] to be successful in your careers, at the same time those who are very interested in it and have a passion for it we have a path for them to continue and become professionals in that field,” Jida explained.

“So we have introductory courses and then we would move on to intermediate and advanced ones so those who really apply themselves and have a passion for it can really excel in it.

“Web development is going to be changing, so whatever is used currently in this market, we teach it and then we go into intermediate and advanced courses where we teach them more complex things.

“If they do a simple website, then they can do social network and e-commerce sites — it gets more complicated.

“The same with app development, we start with simple apps and as they go to harder courses they go up towards more complex things.”

The idea behind the masterminds

“We identified the needs and as parents we wanted to find programs that [the children] benefited from.” 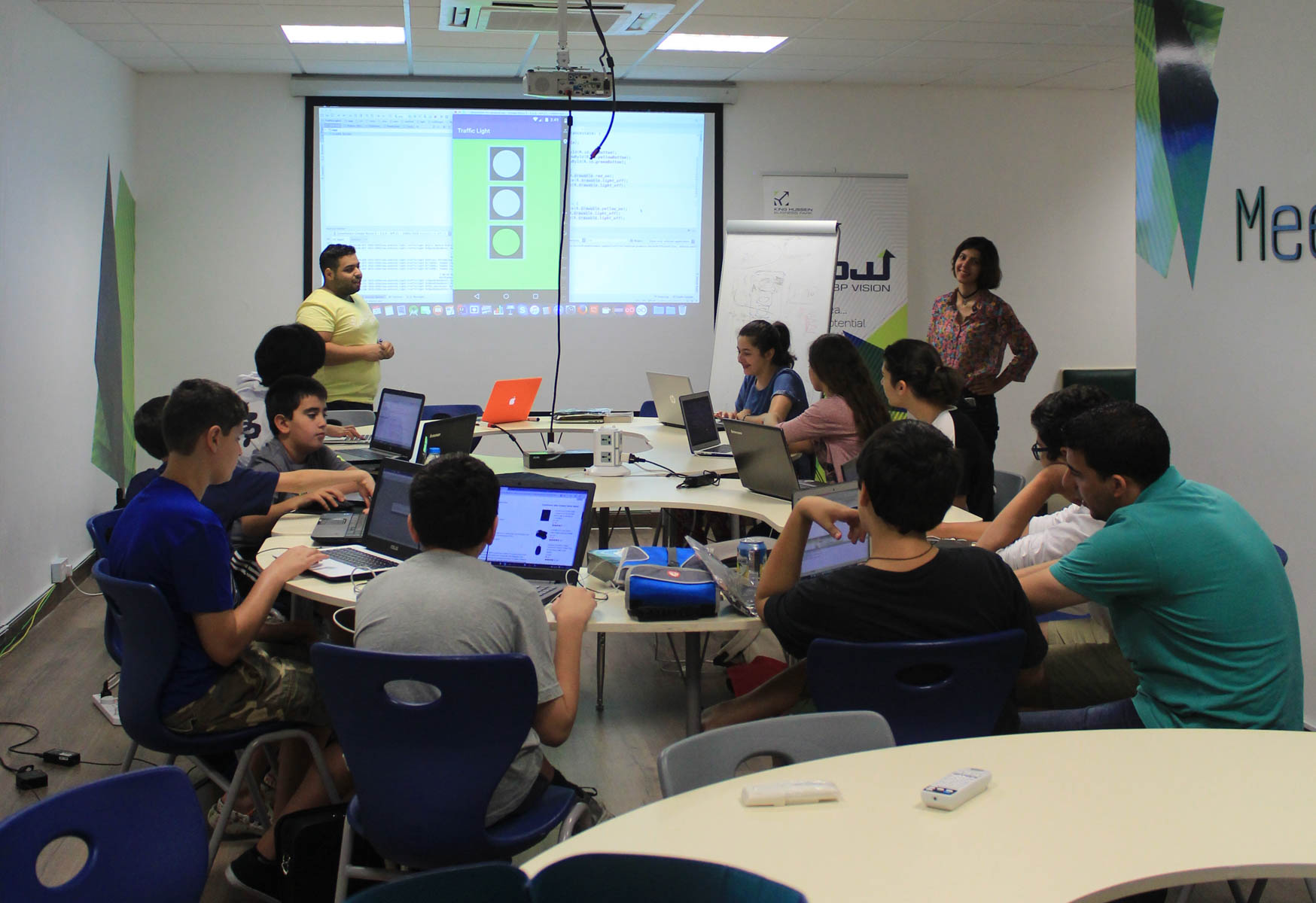 The Coding Circle at work

Jida and Ruba wanted to provide a better set skills for the children which somehow led to the idea of coding.

“Basically we both had our own businesses, I had a startup called Mintaad — it’s an online lending library,” Ruba explained.

“We were friends for a long time and [Ruba] was running Mintaad, which is an online lending library and she focused more on literacy and I had a passion for parenting,” Jida said.

“My business was called Ahaali, which was an online blog for parents in the Middle East to get in touch with each other answer questions relevant to each other — there are many blogs out there but they were mainly western-based.

“So we had these two businesses and because they were overlapping and we were both concentrating on children we thought we could do events together to promote our businesses.

“Our first event was to actually bring a British author from the UK to do this creative writing workshop and after we did it it was very successful and the kids loved it and the parents begged us, ‘whatever you do  just tell us about it now.’

“We thought this was fun and there was so much value in it that we wanted to do it more.”

Ruba said the idea of coding just happened — when they saw it as an essential skill to have within society today.

“We wanted to do programs that will benefit the children, so then came the coding and we kind of dived into this and that’s how it developed,” she said.

“We identified the needs and as parents we wanted to find programs that [the children] benefitted from.”

“So it wasn’t really planned, it just happened,” Jida added.

“We found it was very useful and there was a big demand for it and we found we had a passion for it — and we enjoyed doing it.

“Then we formed this company together and took it from there.” 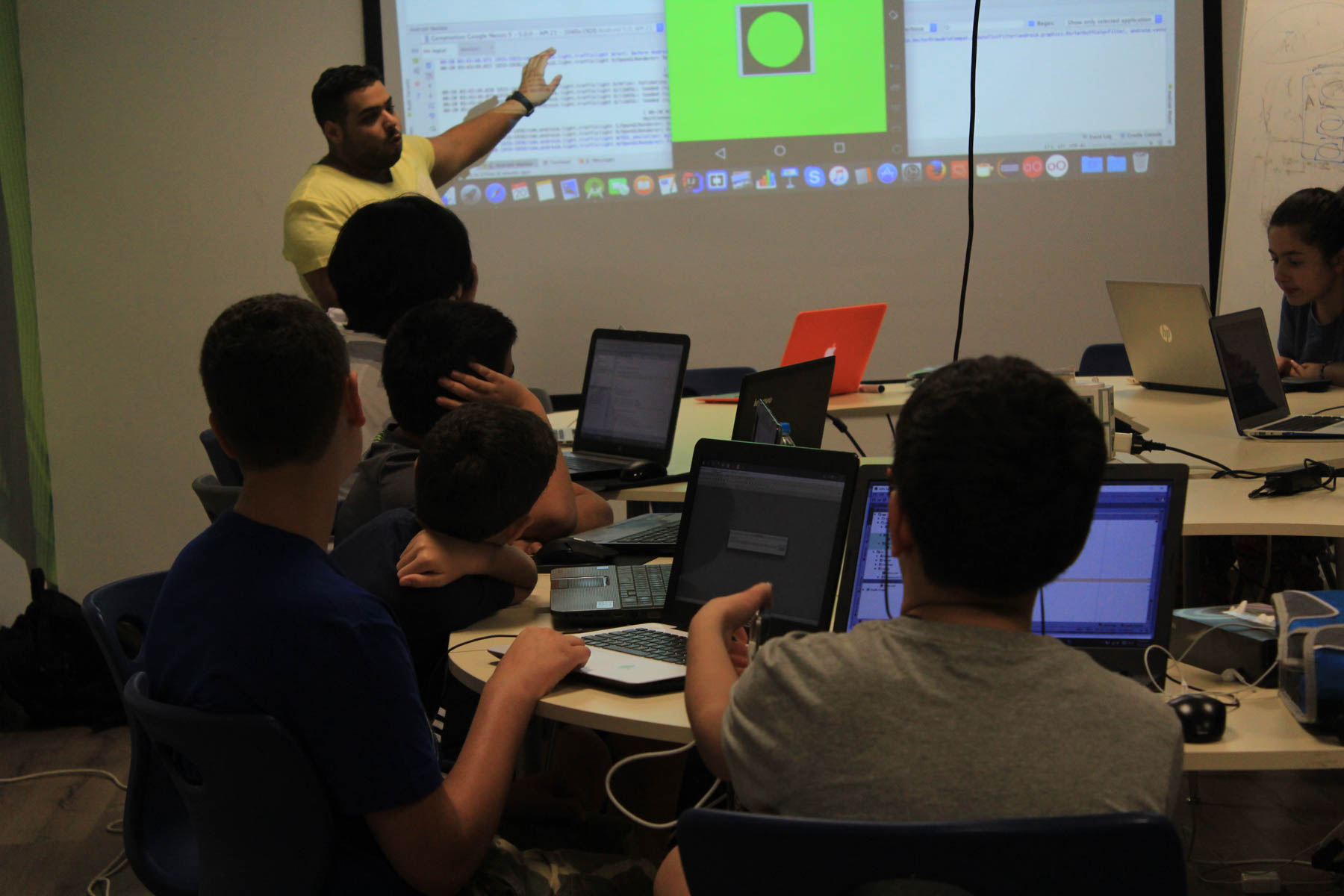 “We need people who are programming now currently to teach the kids best practices and at the same time if you have a passion for coding, it’s electric.”

Jida and Ruba believed in spreading passion from passion — hoping the children will be able to discover their passion from this program.

“Our instructors are all web developers themselves, we don’t like to recruit teachers who haven’t been working in programming for a while,” Jida said.

“We need people who are programming now currently to teach the kids best practices and at the same time if you have a passion for coding, it’s electric.

“You transfer your passion to the kids, ‘look what we can do, I’ve done this, see how you can do it, etc.’

“All our teachers are professionals in the field, they do it as a part time basis, so they’re not full time employees, they have their own jobs and startups and they’re CTOs of their own companies and they do it because they have a passion for it as a freelancer.”

Coding: the road to a better future 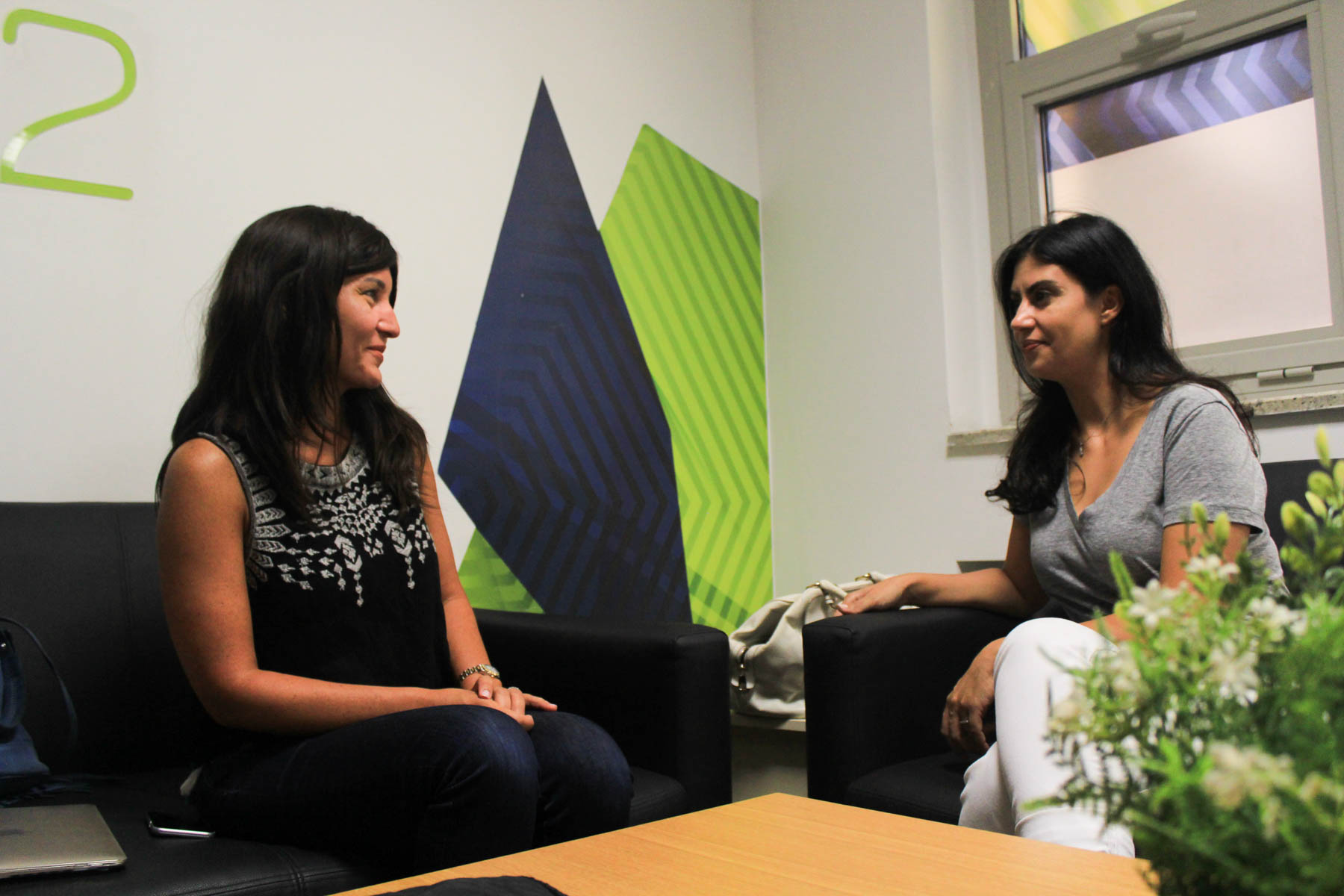 The two moms have big plans for their business

“By introducing them to coding, we’re actually expanding their minds and we’re exposing them to things that they wouldn’t have been exposed to otherwise, and it gives them another choice of career to follow up on.”

Jida and Ruba said they wanted their program to create an impact for the children involved — especially for the future of Jordan.

“We’re just a startup, we’ve been doing it for over a year now. We feel that it does have a positive effect, we are approaching schools and making them aware of our programs,” Jida said.

“We’re actually operating in two schools now, they actually want us to come in and give it as an after school activity — so they want their kids to be exposed to these kinds of programs.

“They probably don’t have the background and curriculum to give these kind of programs but there is interests and awareness that these programs are important, so in that sense, I feel we are assisting them, because we have the teachers, curriculum, and we just assist them by offering it as an after-school activity.”

“By introducing them to coding, we’re actually expanding their minds and we’re exposing them to things that they wouldn’t have been exposed to otherwise, and it gives them another choice of career to follow up on,” Ruba said.

The two moms however admitted that it was not always easy to balance work and family. 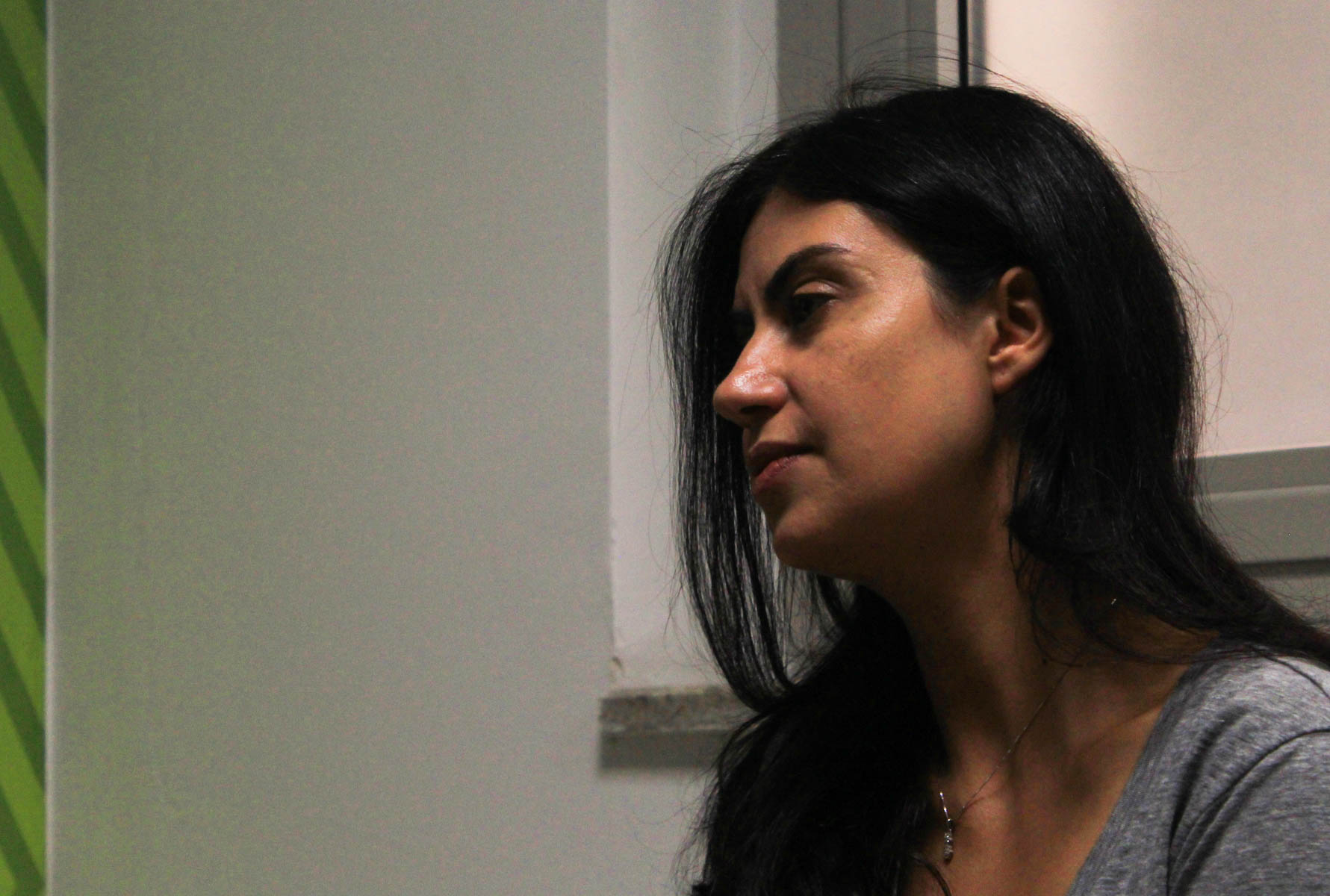 Jida stated the hardships of being a mom and entrepreneur

“It’s managing, managing between home and work — you kind of have to have a balance,” Ruba said.

“You want to go and work but then you’ve got home, you just need to have the right amount.”

“So you have to be everywhere at the same time.”

Despite the challenges faced, the women entrepreneurs still hoped this program would be able to achieve greater outcome in the future.

“The hope is to reach as many kids as possible,” Jida said.

“I feel we’re able to deliver this added benefit to kids to be able to expose them to so many skills throughout their lives and I would hope to be able to reach many more kids. 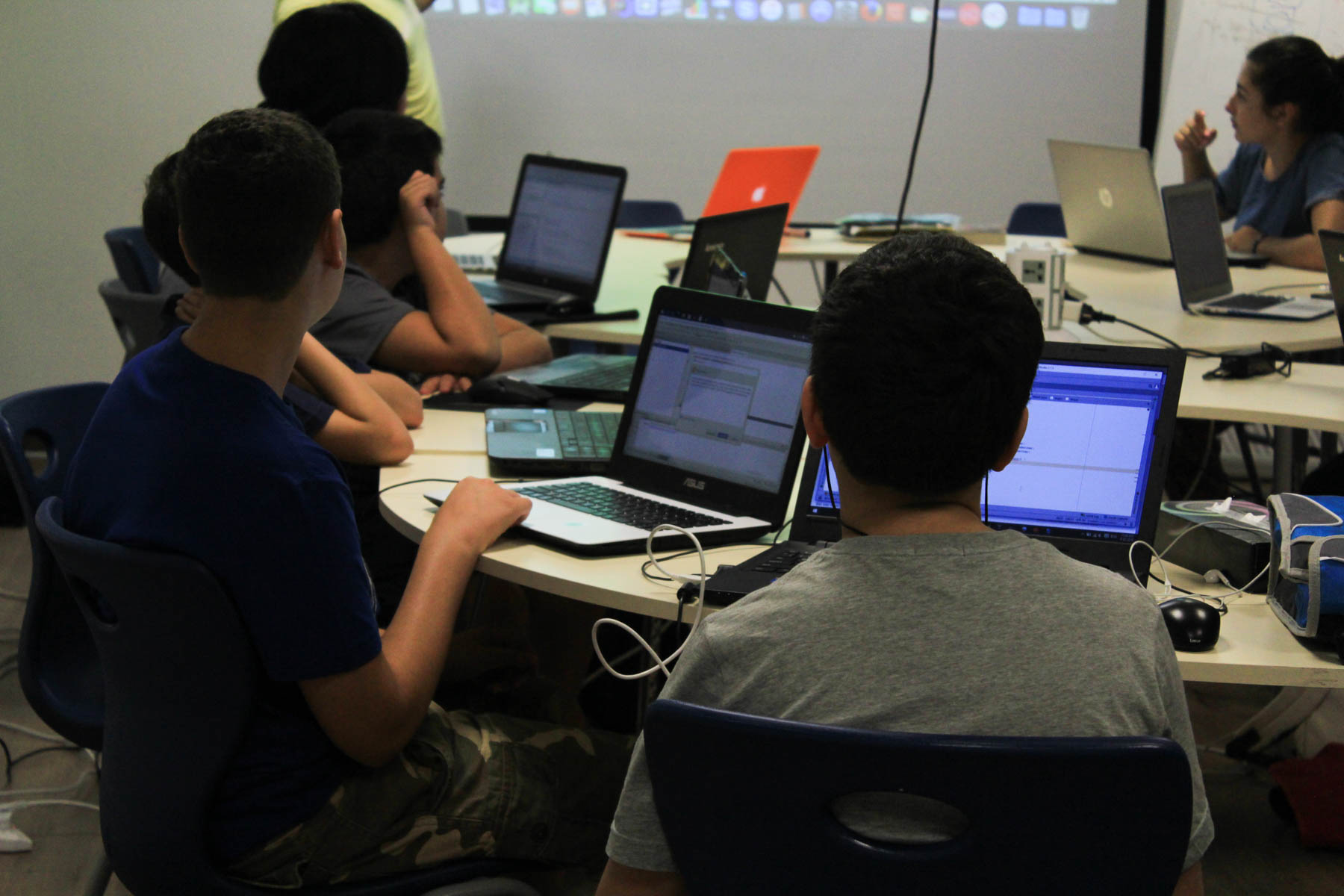 “The hope is to reach as many kids as possible,” 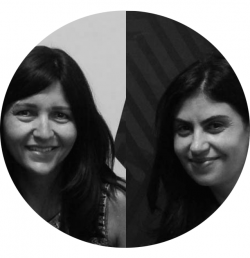 Jida Sunna and Ruba Asfour are the co-founders of an education institution called the Coding Circle, specializing in teaching children ages four and above about coding — with some additional programs such as design, literature, and more. As parents, these women entrepreneurs wanted to create a greater skill set for the children in Jordan.