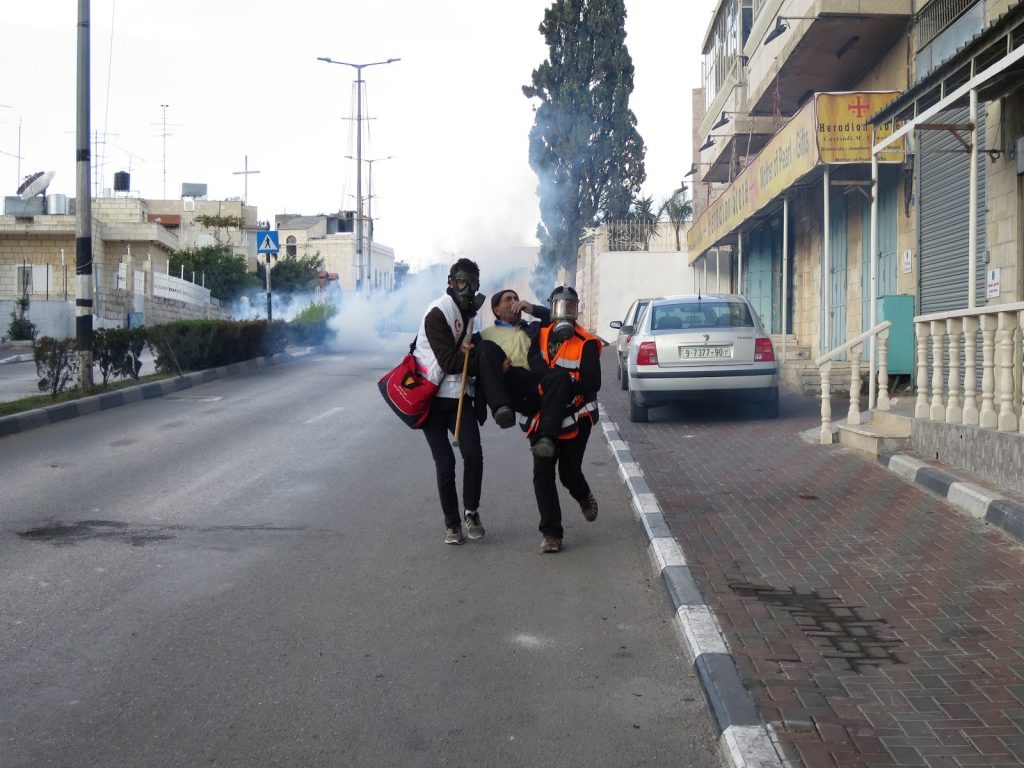 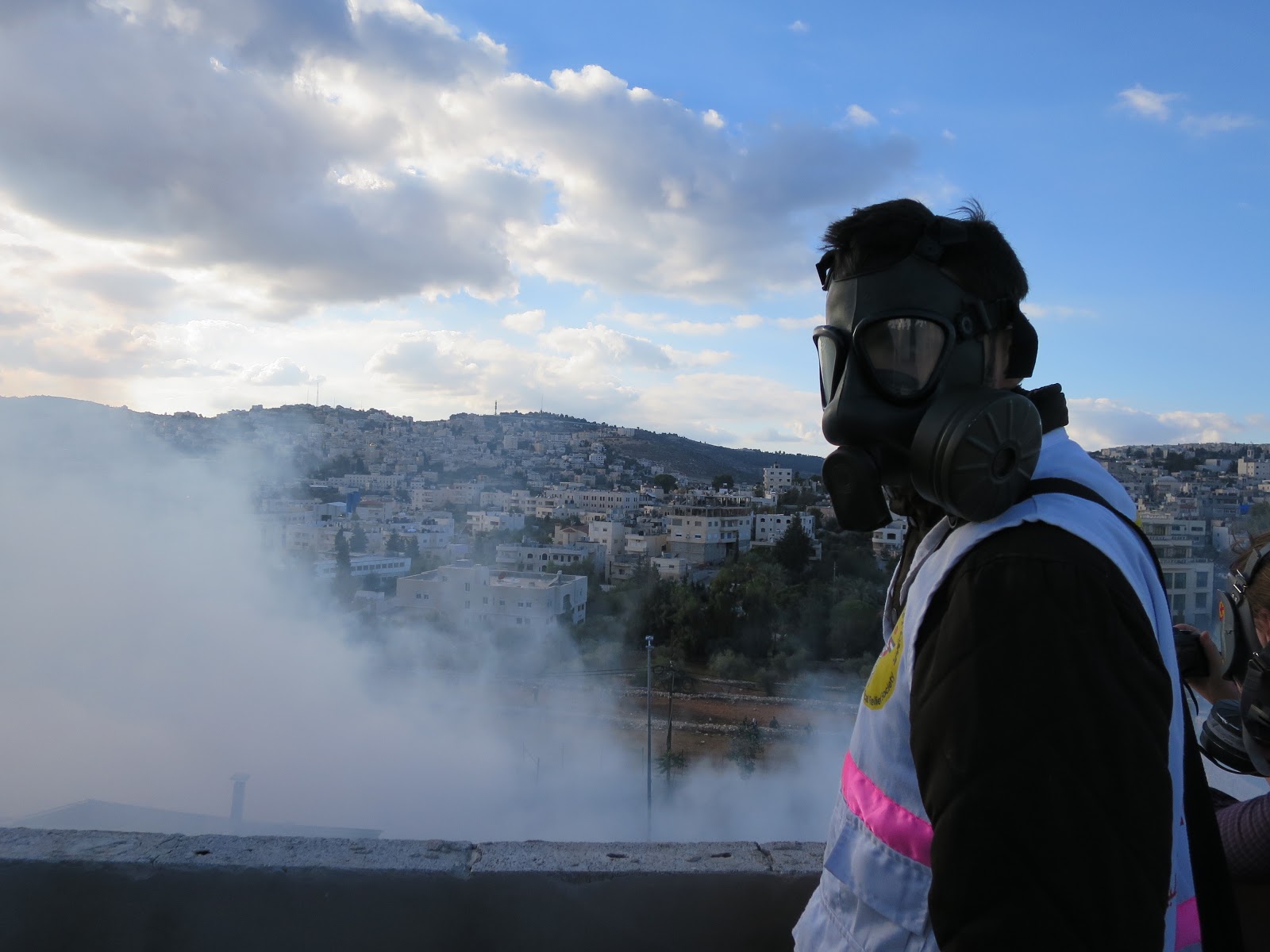 From a rooftop in Azza refugee camp near Bethlehem, Hashem al Massaid can see trails of tear gas cascade from the sky into the alleyways below. The gas seeps into homes and through narrow streets until it merges with the thick fog already carpeting the ground.

Massaid, 16, has arrived to clashes at Azza refugee camp straight from school. He has to study for a physics exam later, but for the next few hours, he is a volunteer paramedic with the Palestinian Medical Relief Society (PMRS).

For Massaid and his PMRS colleagues, providing vital medical assistance to protesters injured during violent clashes between Palestinians and Israelis is part of with daily life; a few hours a day spent between school, hobbies and time with family.

One of the main services PMRS volunteers provide is to treat tear gas victims using first aid kits and oxygen tanks. The chemical weapon is commonly used by Israeli forces to disperse Palestinian protesters, seeping through the crowds and inflicting an intense burning sensation on the skin and eyes while obstructing breathing.

Often, tear gas is not only directed at protesters, but the nearby refugee camps, engulfing the entire neighborhood filled with families and innocent bystanders: mother’s cooking, children on their way home from school, old men walking to shops, no one remains  unaffected left unaffected as heavy, white gas seeps through the neighbourhood. 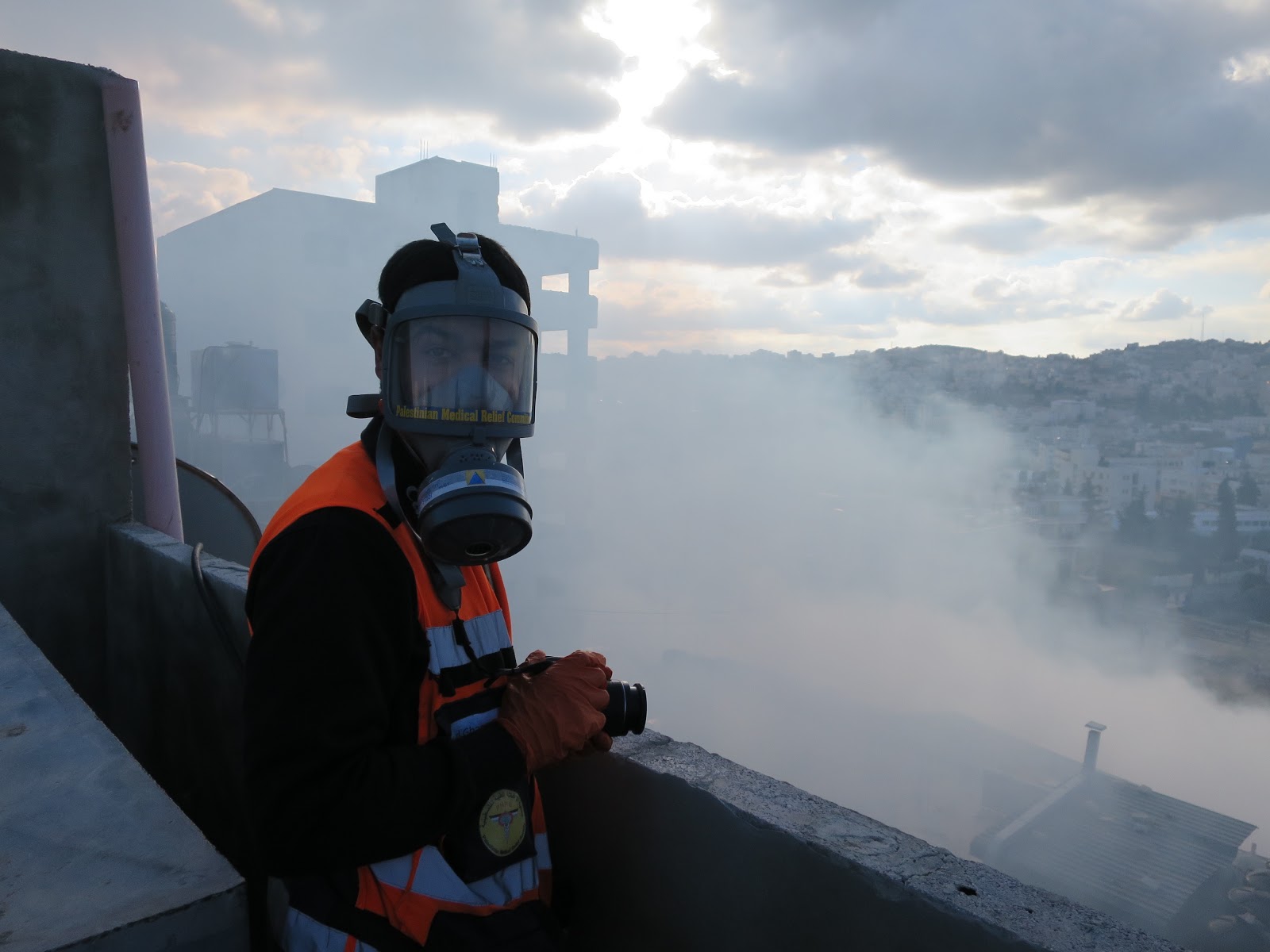 Abed Ghareep is also a fellow volunteer of PMRS

“As volunteers, we do not just work in the streets where the clashes are, we also have to go into the houses and help evacuate people near the clashes who are affected by the tear gas,” explained Abed Ghareep, a 21-year-old PMRS paramedic working alongside Massaid.

In one family home, a mother looks on as her son lies on the floor, chest heaving, as he struggles to breathe from the tear gas that has infiltrated their living room. The atmosphere is frantic, but Ghareep remains calm. He places an oxygen mask over the man’s face, massaging his chest, reciting the words, “breathe, breathe, breathe.”

As quickly as Massaid’s team arrives, they rush back to the front lines of the clash or the next family whose home has been consumed by gas.

Many of PMRS’ patients are children, for whom tear gas can be fatal. On Oct 30, 2015, an eight-month-old Palestinian baby died after inhaling teargas inside his family home in Beit Fajjar, a village south of Bethlehem.

In one home that the paramedic team arrives to with oxygen tanks, a two-year-old girl is asleep on the sofa in her house, unshaken by the sounds of her 7-month-old sister wailing next to her. The family tries to comfort her, the remnants of tear gas still lingering in the air and making it hard to breathe.

The team wipe the children’s eyes with wipes designed to remove the painful sting, and attach masks over their small, delicate faces to help them breathe. “If she hadn’t been treated she would be dead otherwise, absolutely,” said Ghareep said about the two-year-old, after he had left the home. 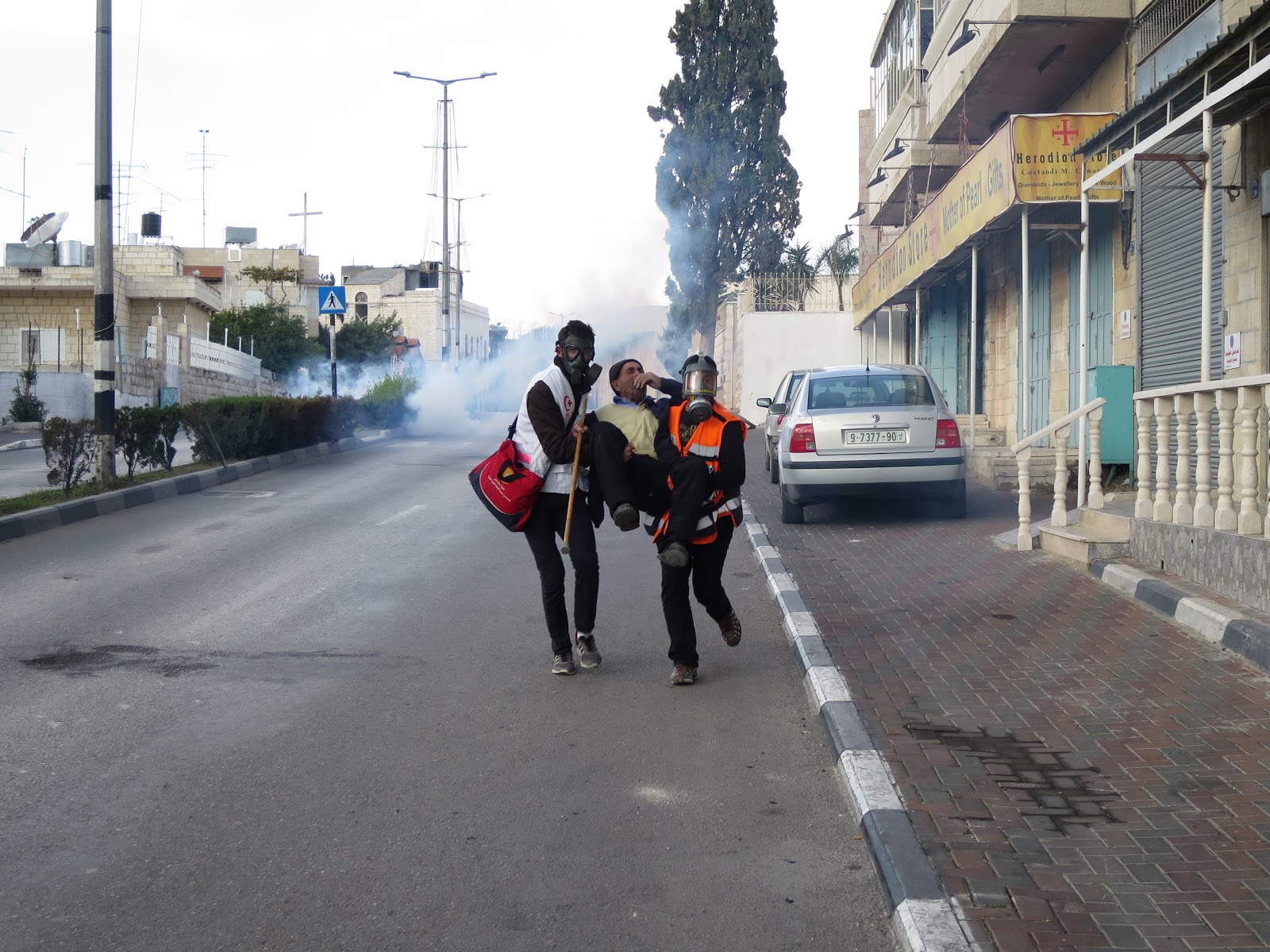 Massaid and his colleagues face a range of risks in the field. Most say they have been shot at, either by live or rubber bullets. One young medic laughs as he holds up his finger, half the nail ripped off from when he was shot with a rubber bullet just days previous.

As Palestinian’s, the group of young paramedics shared the experiences of the people they assist, providing a sense of trust between them and those in need of medical support. Having grown up in Bethlehem under the Israeli occupation, the PMRS volunteers are familiar with the frequent clashes and the local communities they affect.

“The success we have here is that people start to trust us and open up their houses to us. If anything happens to them, they come to us. We are young but the community here trusts us to help them,” said Ghareep.

Massaid’s phone rings. It’s his mother, calling to tell him to be careful and make sure he is safe.

“When I first started I didn’t tell her,” he said.

“But now she knows this is part of me and I am going to do it,” he said. “These guys [at the protests] and the paramedics, we are one. We are in this together and I want to help any way I can.” 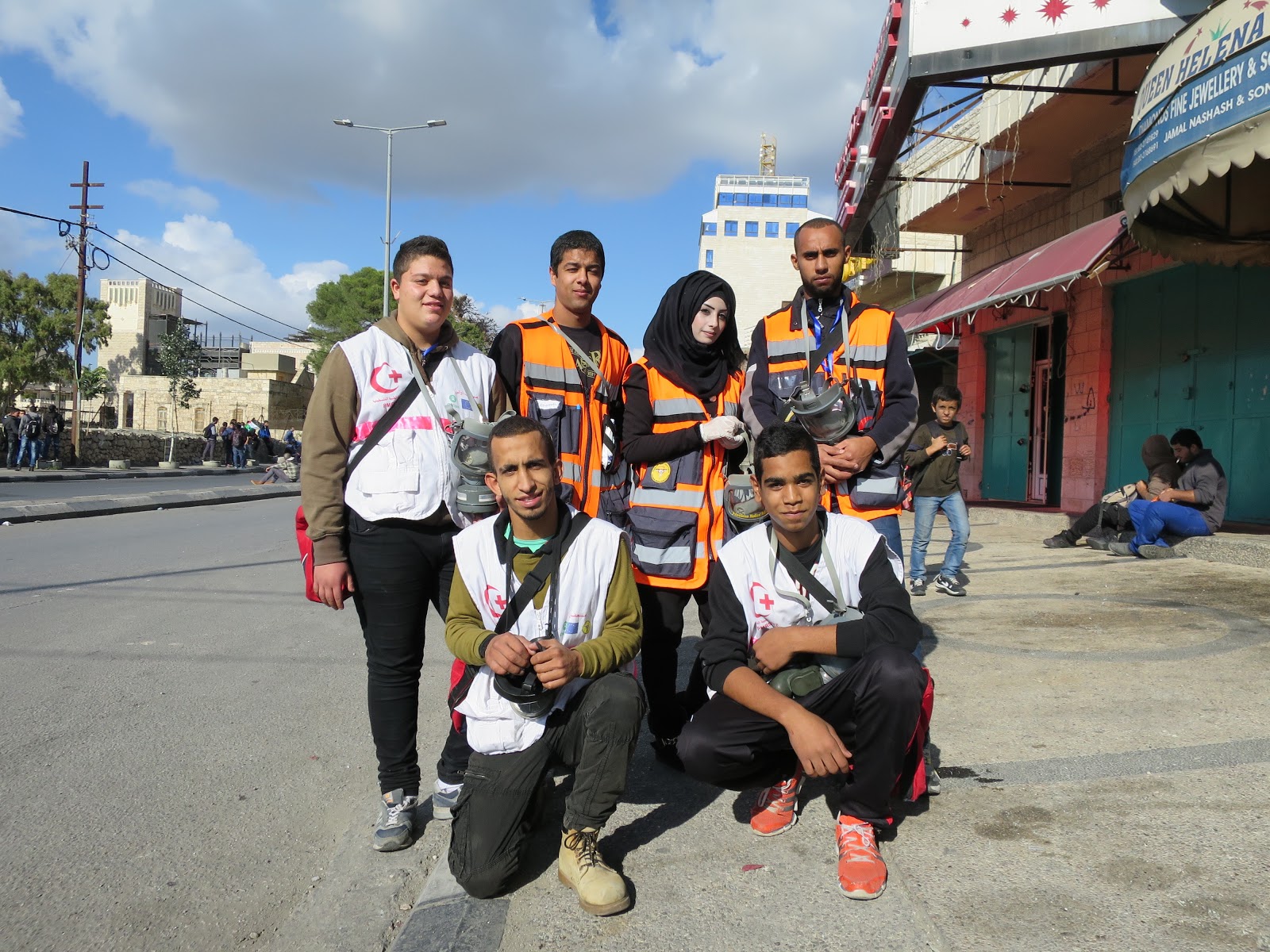 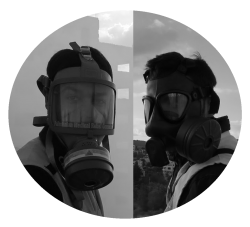 Hashem al Massaid and Abed Ghareep are two volunteers for the Palestinian Medical Relief Society. One of their main tasks includes rescuing and helping people that fall victim to tear gas — commonly used in protests against Israel. The two young men face many different situations — rescuing people from the streets and attending to their houses as a united community amongst Palestinians.