Fight for freedom and equality: testimony from the heart of battle – Part 1 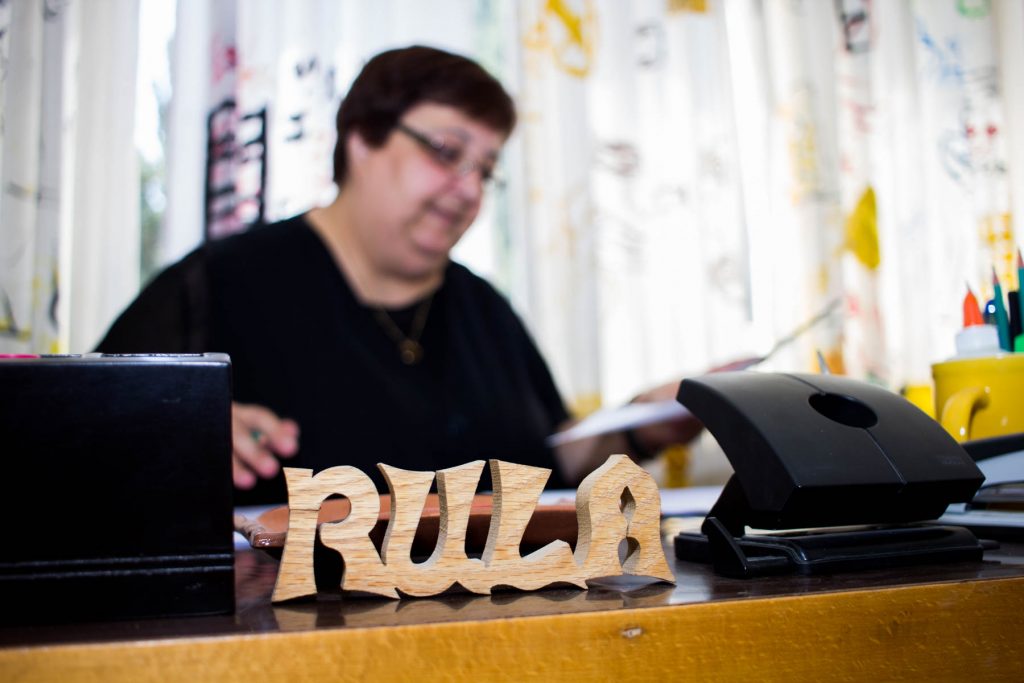 Fight for freedom and equality: testimony from the heart of battle – Part 1

Rula Quawas has been a teacher for over twenty years and has been teaching Feminism Theory, in English, for over fifteen years at the University of Jordan.

“Offering a course on feminist theory was my idea because you can change the life of young women but I think feminist theories should be taught to everyone, to be honest, and I believe men should hop on board because we need to join hands to reach places together .” 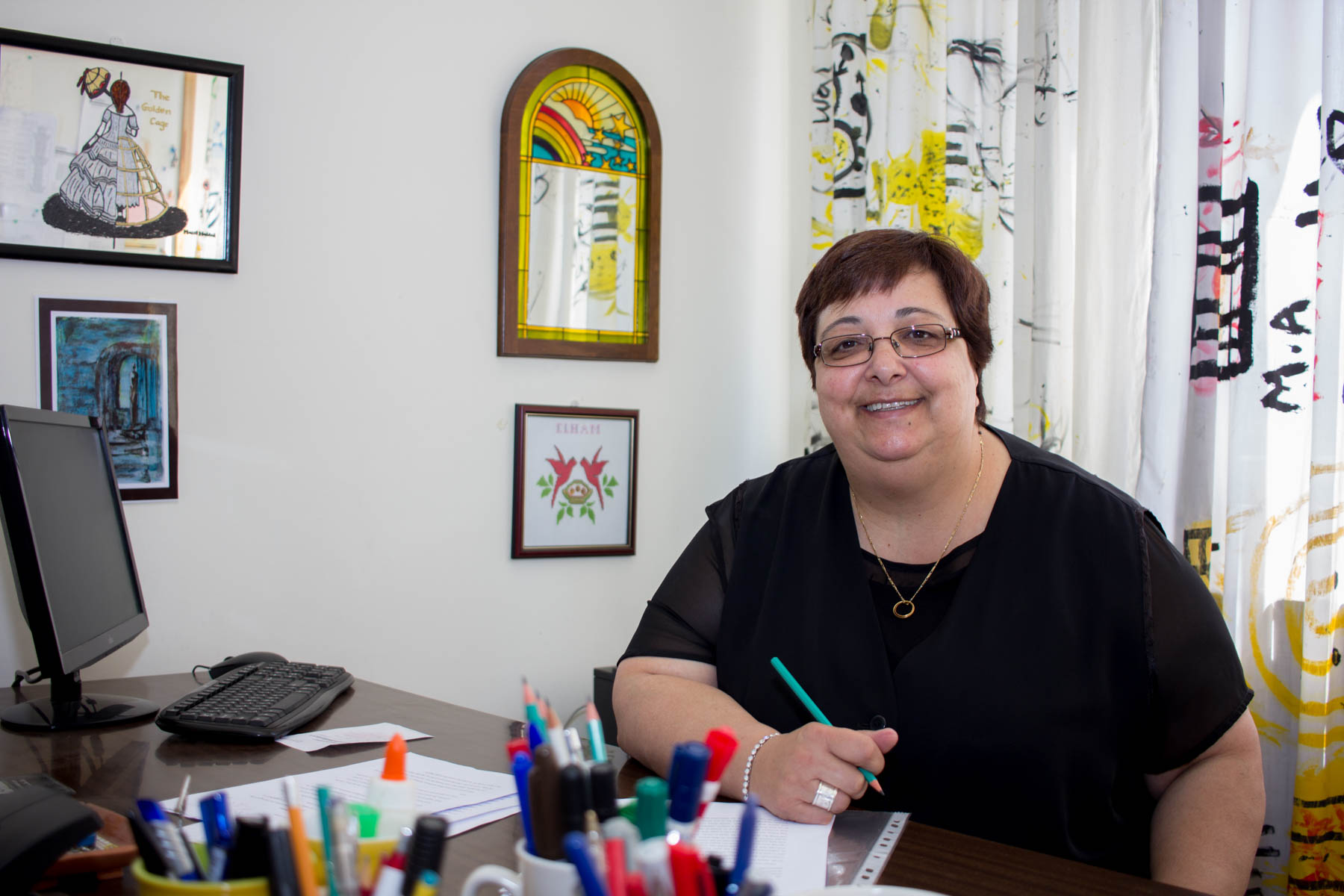 Birth of the class

No citizen should be discriminated against their race, language, or religion is what the constitution of Jordan, Article six stated – it, however, did not state anything regarding discrimination of gender. For Rula, her class is the first of its kind. Without many surprises, she had to push really hard to make it come true and she made sure she was ready for the fight.

“I knew at the very beginning it was going to be hectic,” she said.

“I took my time because I wanted to play it right. All of the professors in the department have been my mentors and professors for a very long time, and all of them are men so I didn’t want to wreak havoc and make huge waves.

“I took my time and what I did — in a very subtle way — I took all of the courses offered in the department and started introducing women writers. All of the playwrights are men, what about women playwrights?

“That was my strategy for about four to five years. I wanted to make sure that I got tenure. I had to be cautious.”

Indeed, she had. Some literally told her that they could “kick her out.”

“It’s very important [the tenure], you have to think about the future and as a professor, I said ‘when I’m tenured, I’ll push harder’ and that was my intention. However, it’s also because I believe in education and I wanted to be here and be able to stay,” she said. 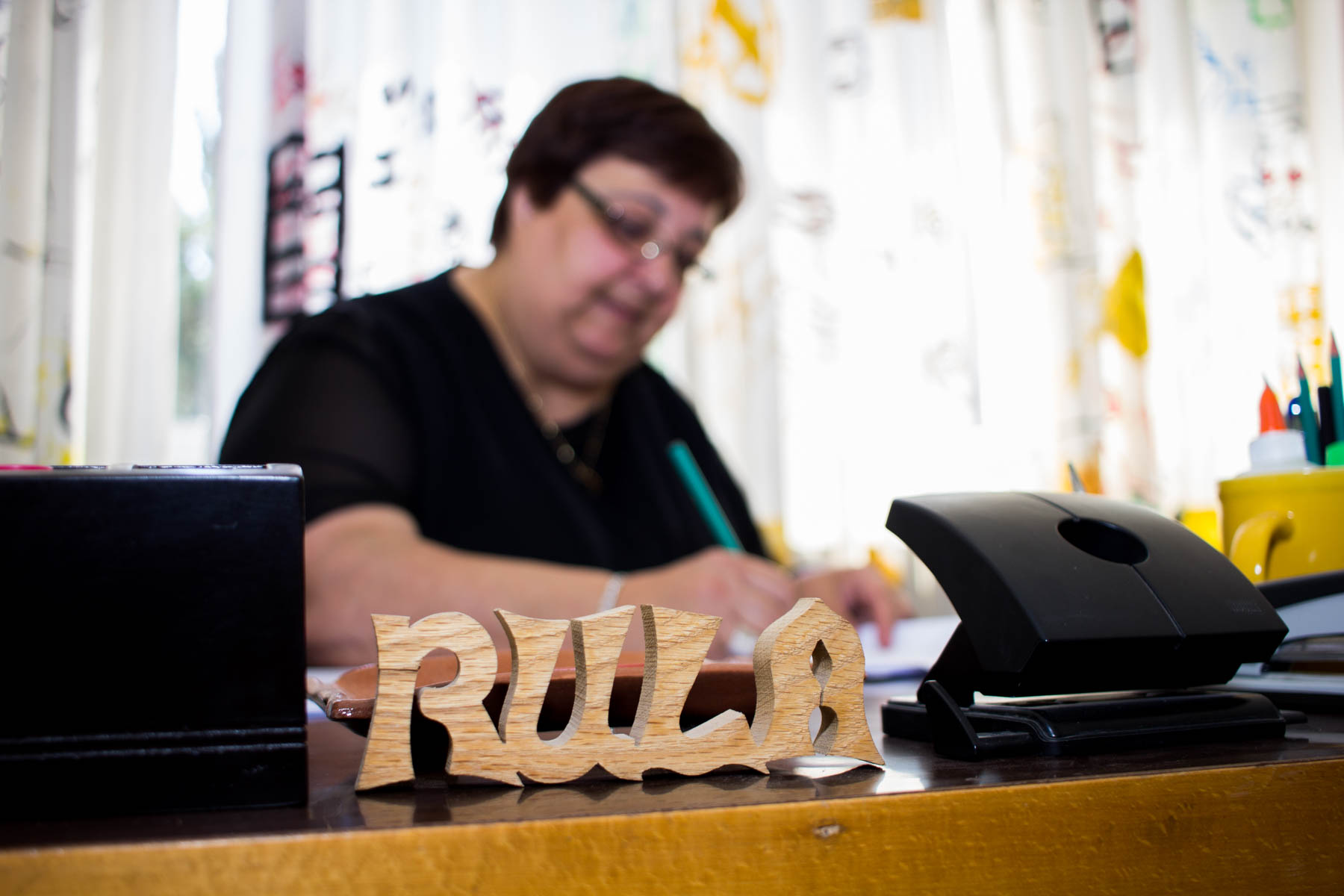 Rula was determined to spread an education about equal rights

Once on more solid ground, she was able to push harder. Even though she could already see her strategy working with other teachers — having had them say it was a good idea and that they didn’t only have to teach male writers — she knew that the hardest step was still to be taken. During the revision of graduate courses, she suggested introducing a course on American literature and feminist theory.

“The opposition was really very hard,” she said.

The first barriers she thought of were ignorance and misunderstanding of what was feminism. Like in many countries feminism is associated with radicalism. Here though, it is also associated with western culture and secularism — adding an extra layer of resistance against it.

Rula also considered that there were three things that played against her.

“I’m a woman, a single woman. I’m a Christian, Greek Orthodox, and I’m a Jordanian of Palestinian descent,” she said.

“All of a sudden I could feel the weight of these three traits used against me, ‘this Christian woman, she’s not one of us.”

However, what doesn’t kill you makes you stronger, and on some levels, Rula is almost thankful to them because they challenged her and she stepped up to the challenge. It is through this kind of adversity, that she had faced before, that she thoroughly deepened her knowledge of the Quran for instance.

“I read the Quran, read interpretations of it, got in touch with friends doing Ijtihad (إجتهاد – a reinterpretation of the Quran) because you need to protect yourself and you need to understand [what you’re up against], which is very important,” she said.

“So they did me a big service because now I can quote the Holy Quran. Besides,  why do we teach post-modern and post-colonial literature? These courses are not stigmatized.”

In the end, it was decided that the course would be an elective — that is to say not mandatory, students would have to sign up for it. Confident, Rula agreed and it worked. Fifteen years later, it still does. But just as the beginning, the rest of the path was never easy and the pressure never stopped. 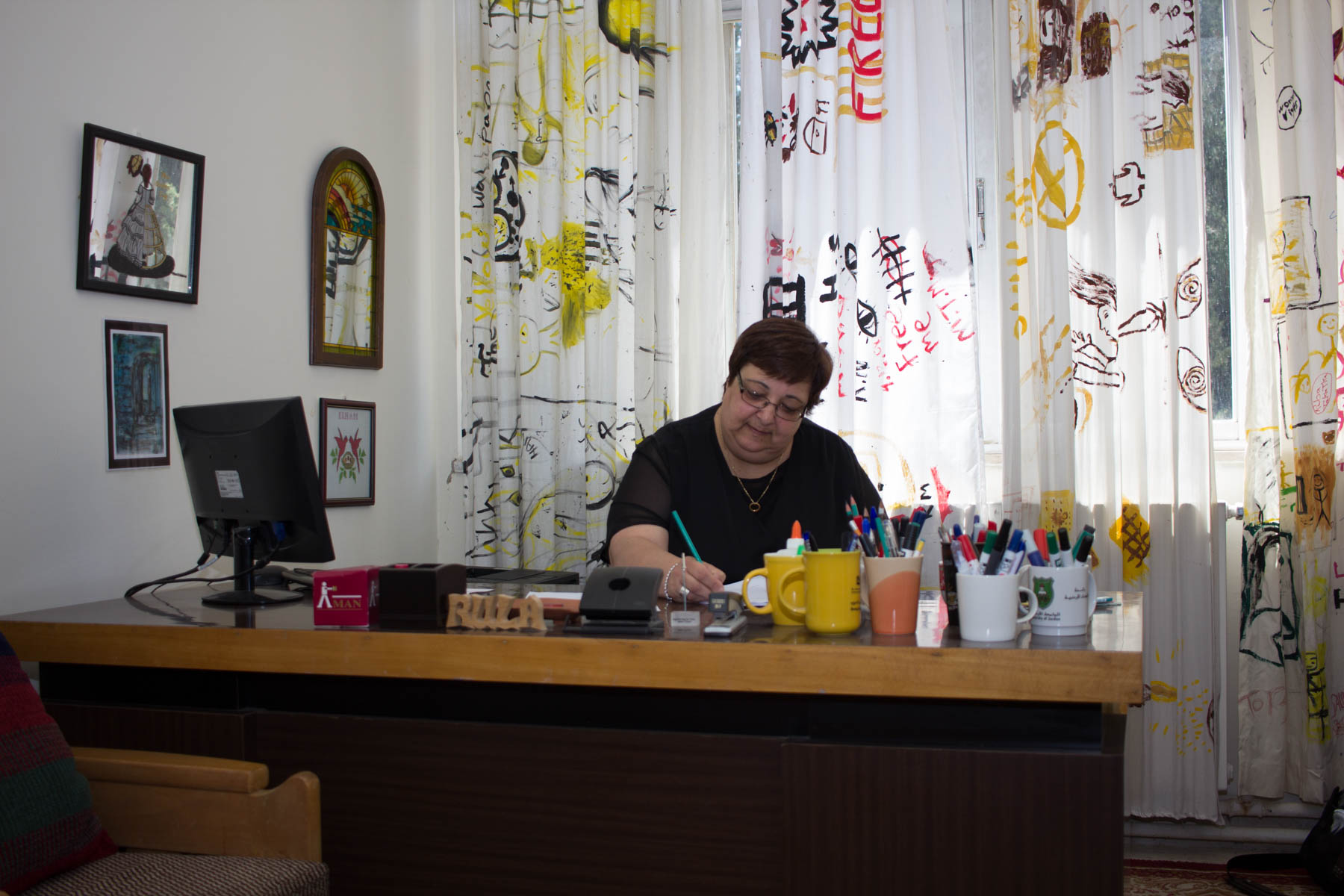 It was never an easy process for Rula

“I’ve been through a hellish time,” she said.

“The stigma, the name calling, and the shaming. Sometimes people pointed their finger at me ‘she’s the teacher of feminist theory.’

“The way people look at you. Even the way I laugh. How strong can I be?

“One of my students took off the hijab and I was blamed for it.  I was responsible for her choice, they have said.  The hijab for me is a choice she has to make, not me.  If she wants to wear the hijab, let her wear it .”

Neither did the feeling of loneliness that came with the blatant lack of support.

Following the movie on sexual harassment, “not a single human being came to my office and said ‘Rula, I’m here for you,’” she said.

“I do understand, but it kills my heart, it butchers my heart. I feel enchained. I felt like Hester Prynne — the main character of Nathaniel Hawthorne’s The Scarlet Letter: A Romance, required to wear a scarlet A, for adulteress — I feel all of these eyes constantly piercing me, penetrating me for something I believe in.”

After a while, people started to come around and extend their support openly.

“After two years some of them would come and say ‘we’re sorry, but we couldn’t,’ she said.

“’Don’t apologise,’ I told them. If you want to help, it has to come from your own heart. It has to be honest and genuine.

Sometimes a simple and little ray of light would come out of nowhere.

“Walking on campus somebody would come and pat me on the shoulder, somebody I had never seen before and I had tears in my eyes.”

Nevertheless, Rula is not the only one under pressure. Her students — her kids as she likes to call them — are just as much victims of their choice to follow this course. 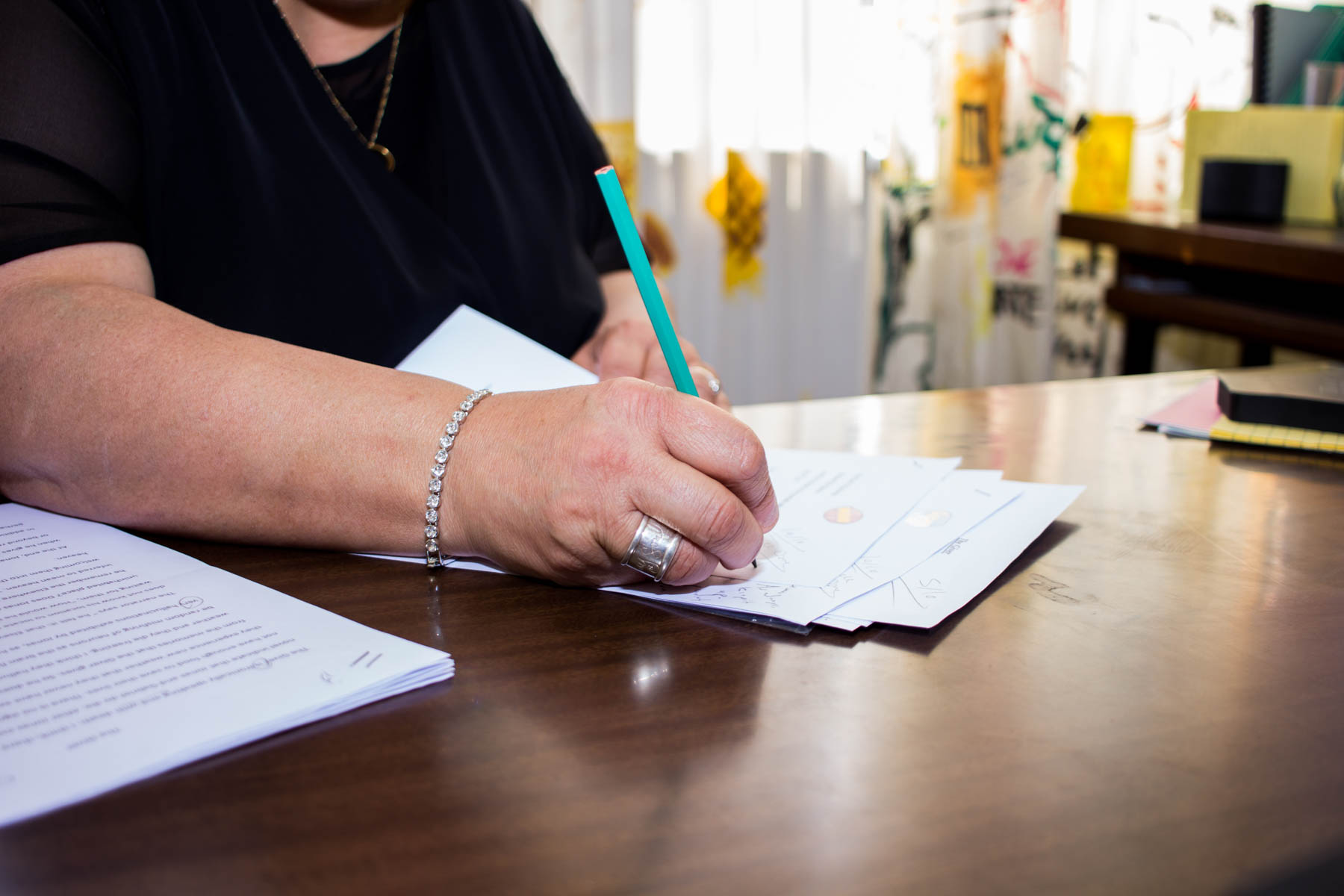 Despite the hardships, Rula persisted

“In the classroom, some of [the students] tell me they took this course but didn’t tell anyone,” she said.

“The stigma, when you take the feminist theory course is too overbearing:  you’re a lesbian, you hate men, you’re a misandrist, you’re un-Islamic or anti-Islam, you’re an agent of the West. You’re against everything we stand for — your nation, your identity.”

For instance, one of her students had to read books for her thesis and one of her professors was surprised that she was wearing the hijab, for the books were “full of sexual expressions.” Owing to that, she was simply advised to discontinue her forbidden readings.

However, the pressure came just as much from the outside as from the inside, for it’s not easy to walk a path your mind was never exposed to.

“Many of the students sign up for the course and then after two months they drop it because they cannot take the heat,” she said.

“We say ‘penis’ in the class, we say ‘vagina’ in the class and we say ‘performativity of gender’ and ‘politics of the body’ — all these are transgressions.

“You read [the books studied in class] about women who commit adultery or women who are bisexual. When I talk about Judith Butler and the LGBTIQ community they don’t want to talk about it, even though queer theory is important to feminism.

“Sex is biological and gender is cultural, it’s a social construction.

“[Judith Butler] troubles gender, destabilises the construction of gender. ‘No, no, no, no’ they say ‘It’s Adam and Eve.’ Some concepts come up against a big wall because in their own mind it’s an alien concept.

“Sometimes I see the ferocity of the opposition. This is too much. They say so. So they drop and report me. They don’t know how to deal with it. They internalise it and they can’t deal with it.”

Sometimes the students try and talk to her but even she can’t always reach them and help them.

“A student came to my office and said she was going to drop this course,” she said.

“I told my student that she should not, that she was an A student but she replied that she could not take it anymore, that every time she was going home the pressure on her was a lot.

“I understand that you can’t force feminism on people.  Some of my students are authors of pain. And when a young woman comes to me and tells me ‘I have wings, but I know I will never ever use them’, that pains me.”

And while some students have difficulties questioning the environment they grew in and can’t seem to cope with it, some simply don’t want to pay the price of challenging it.

“One student said to me, ‘I buy my peace. If not, I become an outcast.’ And it’s true, they become a pariah. My students admitted that they were complicit with their own victimisation but also not to forget that they do it for [the men] — to make them happy and to live a peaceful life.

“‘Deep within, we’re not happy,’ some said. And my response was that our society wants us to wear masks, making our social-self stronger than the inner-self. When you keep on wearing the same mask, you become that mask. You mute yourself. It is very pernicious.”

Because of that, many young women have learned to use these rules to their advantages and how to play around them, walking on the edge.

“The system is teaching them to be conniving, how to be foxy and how to lie. A woman told me ‘I make him believe that I am following his advice but at the end of the day, I do what I want.’”

So are we teaching women how to be liars? Is it smarter in the end? While it is a way of surviving, is it really a way of living?

“One woman told me that she knew her husband wanted to have sex always on the same day and that she was making use of that day — she gets what she wants. So in a way, is she then prostituting herself?” she said.

“Don’t we all pay prices after all? However, I realise that I want her to be free because it’s her right, not a privilege.

“I’m in this conflict. Should I pity them? Should I be angry with them?”

If some students have troubles handling this new knowledge, some simply deny and reject it, backlashing when facing those painful theories.

“Some women will take this course and become even more stringent on feminist issues. They end up saying ‘now we understand, now we need to go back.’” 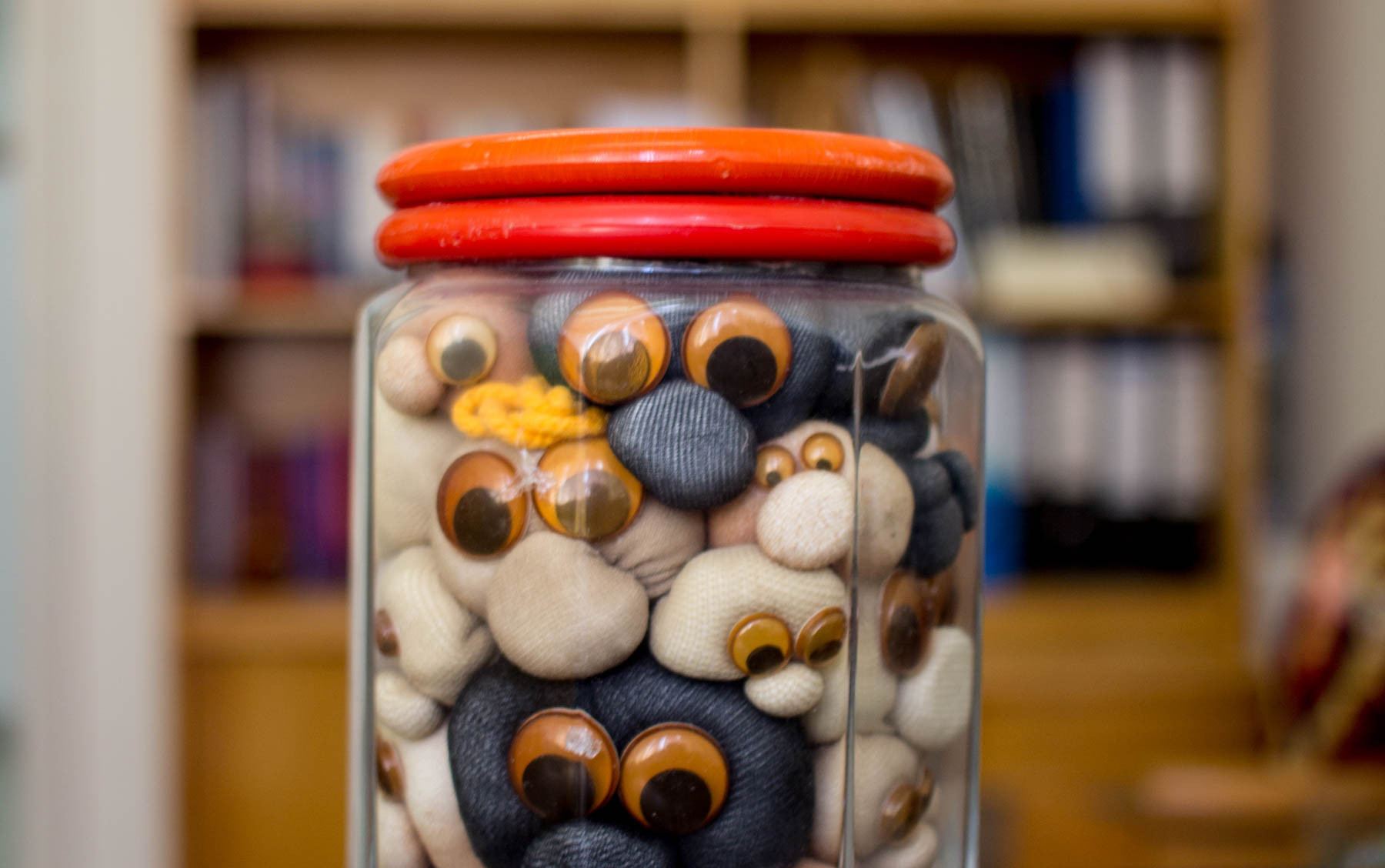 The artwork of one of Rula’s students

Rula’s story consists of a two-part series. For the second part, please check the link here.

Rula is a professor at the University of Jordan teaching feminist theory.