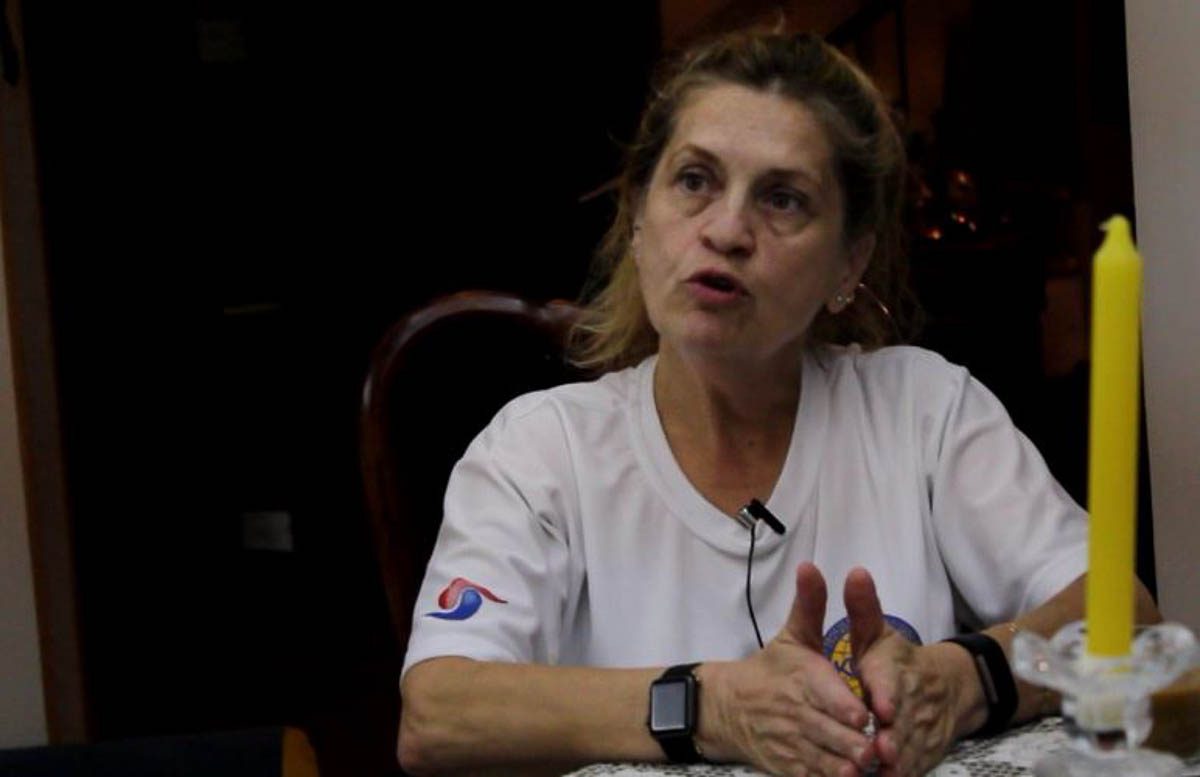 “Yes, I faced discrimination. I fought a lot, I’m alone,”

A tattoo, a motorbike, a Pit Bull and a spirit to match, it is hard to see at first glance that discrimination has been a big theme in Haya Qubain’s life.

A mother of two and married to a local dentist in Amman, Jordan, Haya is currently fighting to create change for Jordan. 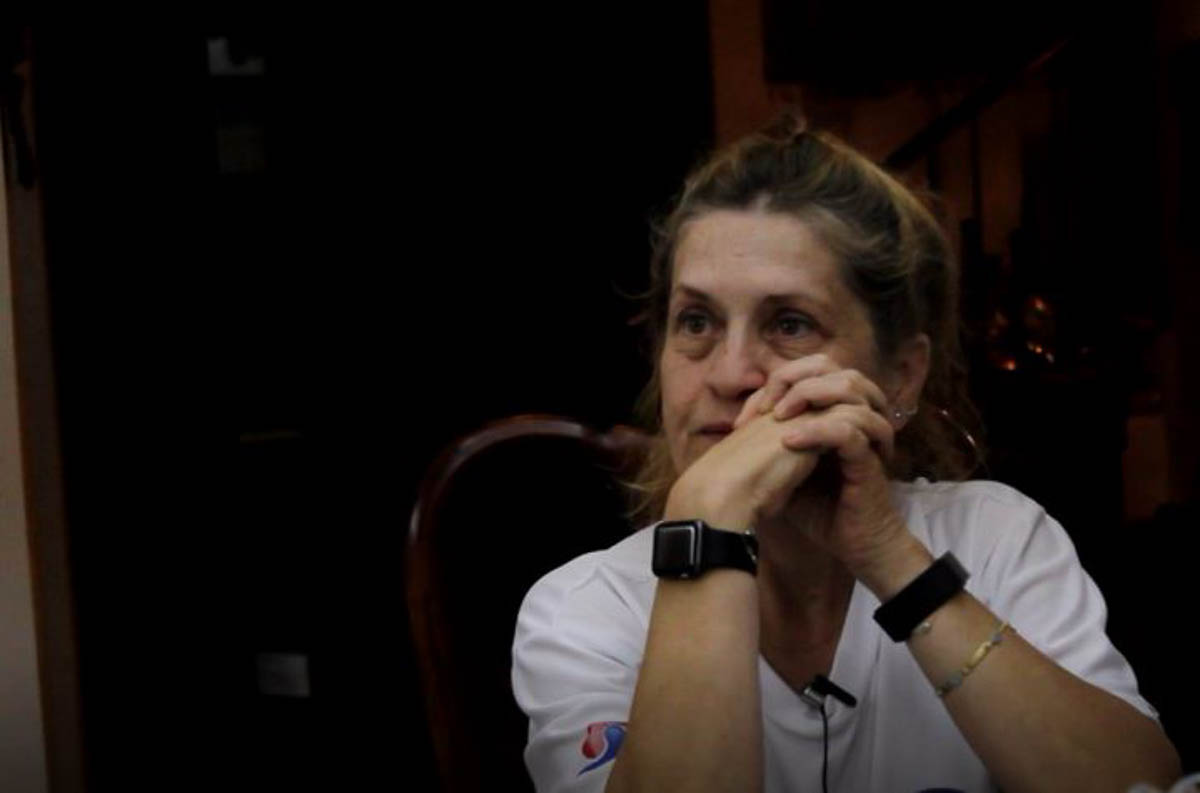 Haya Qubain is an occupational therapist and the first women to receive a black belt in the Arab world. She is now suing her country to fight for her rights.

“[The Federation] always said we don’t want you because you are a woman and in Jordan, we say, ‘I am better than any man,’ I can be 100 men,” she said.

Haya is an occupational therapist, specializing in speech and hearing, with the use of Taekwondo for special needs kids.

She had set the world record as being the first international Taekwondo referee in 1999 in Canada and was the first female to receive a black belt in Jordan.

“My story is I am the first female to play Taekwondo in Jordan. And as a Jordanian, they were proud of it because I am a Jordanian, not from any other countries to become a black belt,” she said.

“I took [my black belt] in 1980, I became the first female to get a black belt and then [the Jordan Taekwondo Federation] fought with me so much no to be a coach, because I am a female and nothing else other than that.”

Haya’s fight with the Federation began when she was appointed as a Referee Chair in the Jordan Taekwondo Federation. Her journey was cut short after an act by her fellow Chair members.

“They caused me a problem by saying I attacked the one who took my place currently while he was praying, and that’s a big thing in Jordan,” she said.

“I was at home, I didn’t even touch him. They excluded me and forbid me from anything in the Federation, and for two years I kept suffering.” 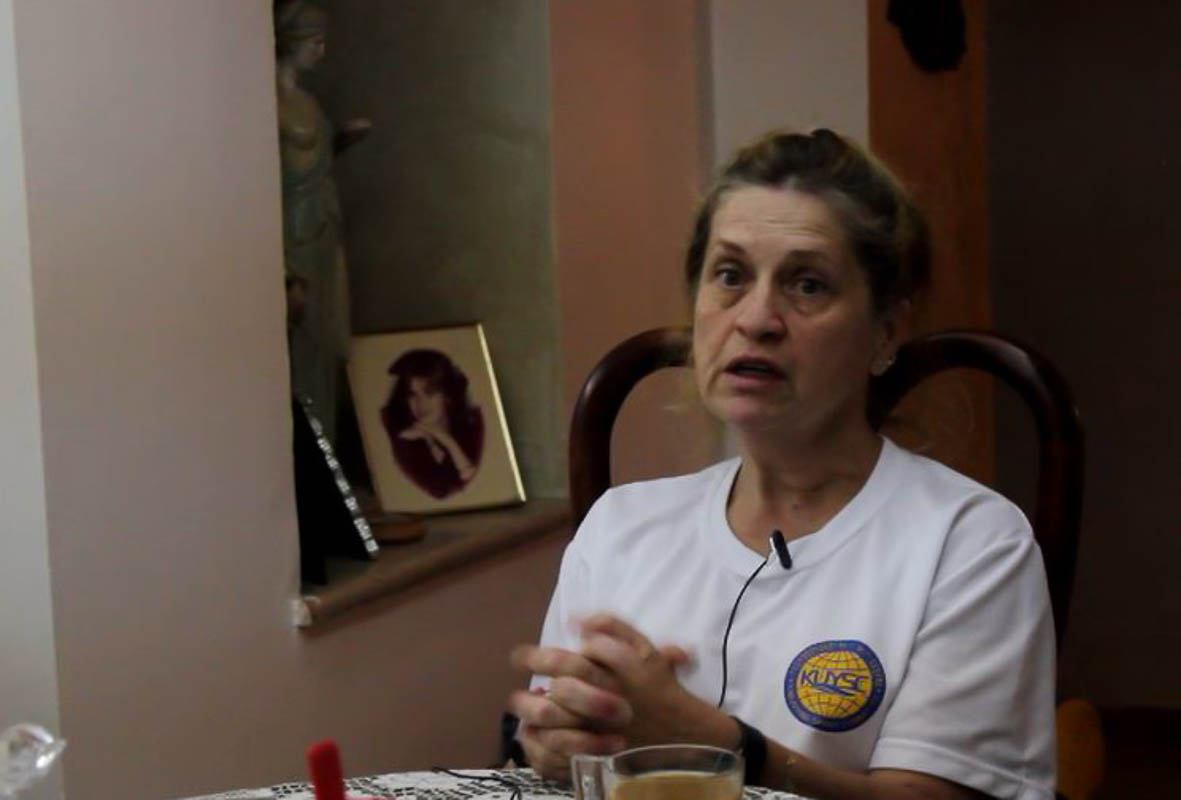 Haya is fighting for her rights as a woman in Jordan.

Haya felt she was excluded for being an educated woman in a country where women’s rights are still rather limited.

Jordan has one of the world’s lowest women workforce participation, according to USAID, with female unemployment rates at 33 percent in 2017, according to the Jordan Times.

According to the Department of Statistics, the development of women in Jordan is progressing with lower rates of illiteracy and high percentages of educated women, women’s participation in the workforce, however, continues to be low at 17.7 percent in 2017.

The influx of refugees into the region also contributes to gender-based discrimination, with high rates of gender-based violence and early marriages amongst Syrian refugees, according to USAID.

Haya felt she was discriminated for being a woman and having different religious views. She is currently fighting for her rights by suing the Federation.

“I did fight. [The Federation members] always said we didn’t want you because you are a woman, and in Jordan, we say, ‘I am better than any man,’ I can be 100 men,” Haya said.

“I have an education, I have a graduate certificate, I have a university certificate, I’m not stupid, but I think they won because they are many and I am one. And I am fighting and now I have a lawyer that they cannot buy and they cannot bribe and now this lawyer is going to be my fighter.”

“My fight has just started because the last two years I thought that maybe it was true and it did happen, I started to doubt myself,” she said.

The Taekwondo coach felt she was ganged up against, which eventually brought her to the point of depression. She started doubting herself.

“My fight has just started because the last two years I thought that maybe it was true and it did happen, I started to doubt myself,” she said.

“Then I said ‘why?’ I’m always down, I gained so much weight, more than 50kg. Then I decided I would lose weight, I would fight.

“I would look better so I can fight; so now, it’s my fight and I will win, I don’t care what it’ll cost, I will win.”

Haya stated she received her strength from the one person who had always been there with her.

“I get my courage from me because for two years I shut up, now it’s time to fight,” she said.

“I have to fight. If I don’t fight, I will die. A lot of people told me, ‘just go to America’ and I would tell them ‘no, I live here, this is my town and my country.’”

Haya believed discrimination towards women would always be prevalent, especially in Jordan, with a huge culture of patriarchy and an obligation for women to get married.

Haya was especially concerned with child marriage trends involving intermarriages (a marriage between cousins or relatives).

According to a 2016 research by the Economist, marriages amongst relatives today are quite scarce, however, the MENA region continues to have the highest levels in the world. Intermarriages are one of the causes of many diseases and psychological illnesses, as it increases the chances that both parents are carriers of dangerous recessive genes, which happens 25 percent of the time. 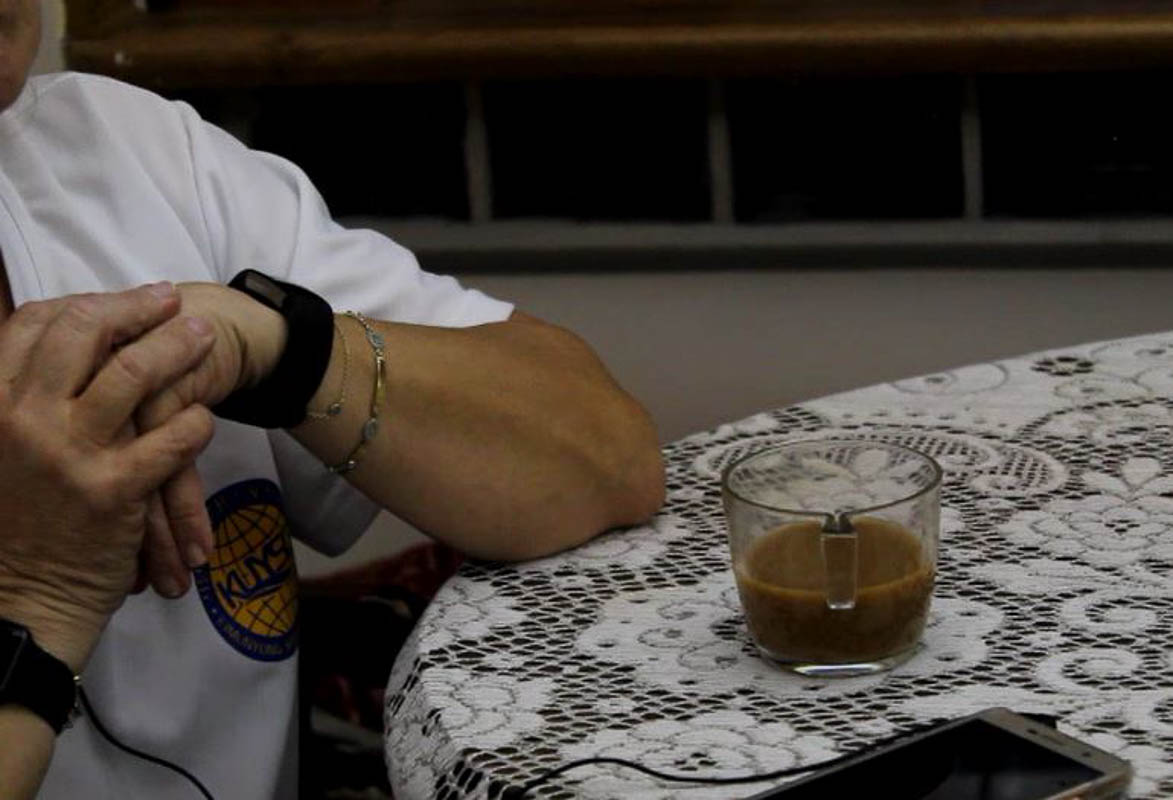 She continuously tries to educate people about dealing with special needs characters.

“I started in 2004 with the police, I started going voluntarily,” she said.

“I started teaching them sign language, about intermarriage, I tried to educate them, like if you go and pray and see somebody with the hearing aid — because hearing aids are very expensive — I started teaching them about those who come for a license and some may be illiterate, how some people might have blood pressure problems, some are autistic. You can’t touch an autistic kid and in the morning, you shouldn’t use a whistle because they will start banging.

“I teach them about communicating with children with special needs…they started sending me papers because a lot of them were from intermarriages as well.”

Haya hoped to increase the amount of help and support given to people with special needs, as well as changing people’s mindset about stigmatized views of people with disability.

“I started a special needs box [at the police station],…if you have a special autistic child, you can get monthly money from that box and it’s working so they’re getting help, because we have a lot of people with autism, retardation, deafness and more,” she said.

Throughout her experiences, Haya had seen many cases of diseases due to intermarriages that affected the child’s life and the way they were treated in their families.

“A lady once called me and she said that her child had a speech problem. I found out he had a syndrome because she married her cousin,” she said.

“This illness, experts thought that it vanished, that it didn’t exist anymore, but I found it [in Jordan], it’s called Blousa (ذات. الفقاعات) syndrome. I don’t know how he lived until now, he’s 10, never been to a school, never been out.

“The first thing the child asked me was ‘are you disgusted by me?’ He said he never saw anybody came to his house.”

“There’s another disease, it’s called Waardenburg syndrome, this is also from marrying cousins…Either they would have strips of white hair or blonde hair and crystal blue eyes,” Haya added.

“They would think that they look beautiful, but they have a profound hearing loss, so what does the mother do? She covers them so people can only see her eyes. A lot of syndromes you’ve never seen in your life, but it’s here in this country.”

Haya said there was a huge stigma towards people with disabilities and mental illnesses within the region and families tend to feel ashamed of their children.

She also stated that statistics regarding these genetic occurrences are rare considering families always kept them a secret. 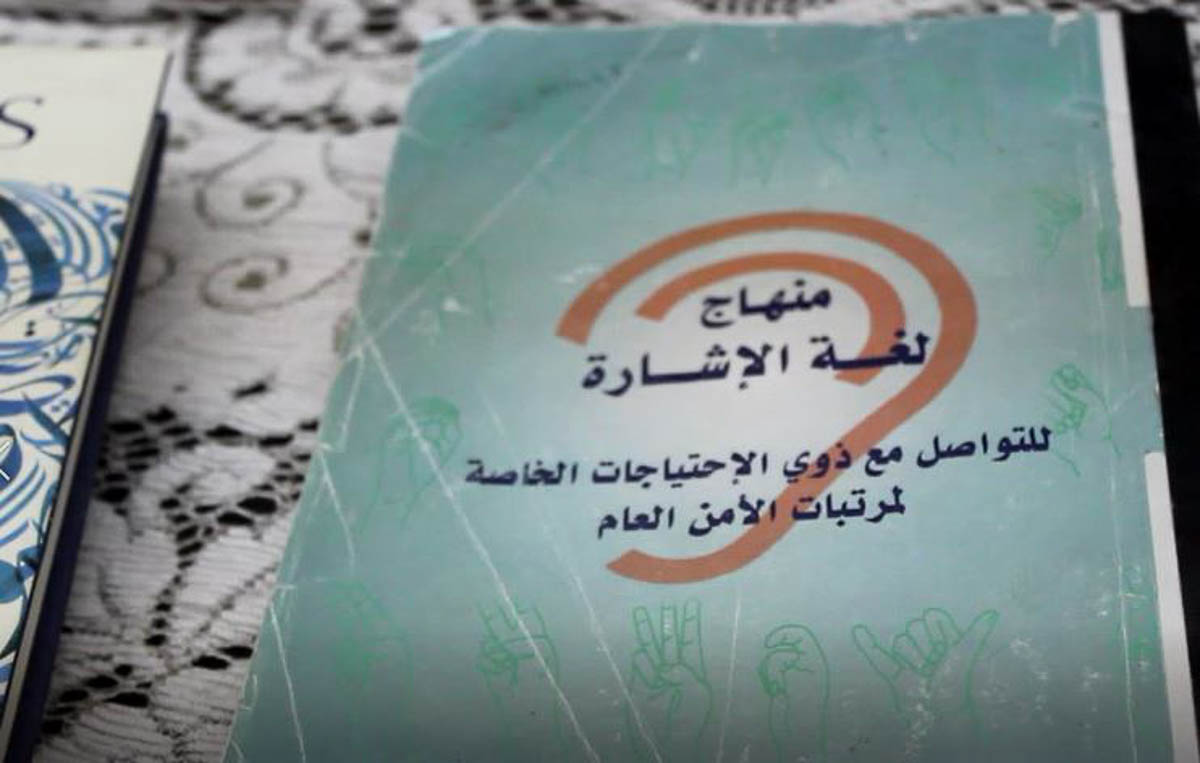 A book on how to deal with people with disability.

How to end the discrimination?

The Jordanian said it was all about changing people’s mindset. She wanted to educate people more in order to end different types of discrimination in her country — whether for women or disabilities.

“I got honoured for the Humanitarian Hall of Fame. The Federation didn’t even know what a Hall of Fame is.”

“I made a booklet, a guide in Arabic and English, I didn’t want to put anything about special needs, I called it Taekwondo in a Different Way. It talks about how people can work with people with disability,” she added.

“I gave it to the Federation and right in front of me, he put it in the trash. I sent the same booklet and distributed to teachers in China, Korea, everywhere.

“In Korea, they honoured me with the best booklet for special needs. In Jordan, they put it in the trash. They liked to say that if I worked with people with special needs that I also have mental problems.”

Haya, however, does have backing from her family and saw them as a great support system, though in the end, it always came down to her.

“My husband supports me and my kids, but I do things in silent I usually don’t let them know until I actually do it because I don’t like people playing with my mind,” she said.

Haya encouraged women to fight, no matter how hard it may be. She believed society could change, however, it would need to be done collectively.

“If you fall down, get up and fight, until you reach the top, even if you are alone. And you will get it!” she said.

“I’m fighting and I know [the Federation] doesn’t like me, but I am better than them, so they better respect women and what we do, if they don’t, they will hit the road, not us.

“It’s a battle, one of us will win, either them or me. I’ve been fighting all my life, why should I give up?” 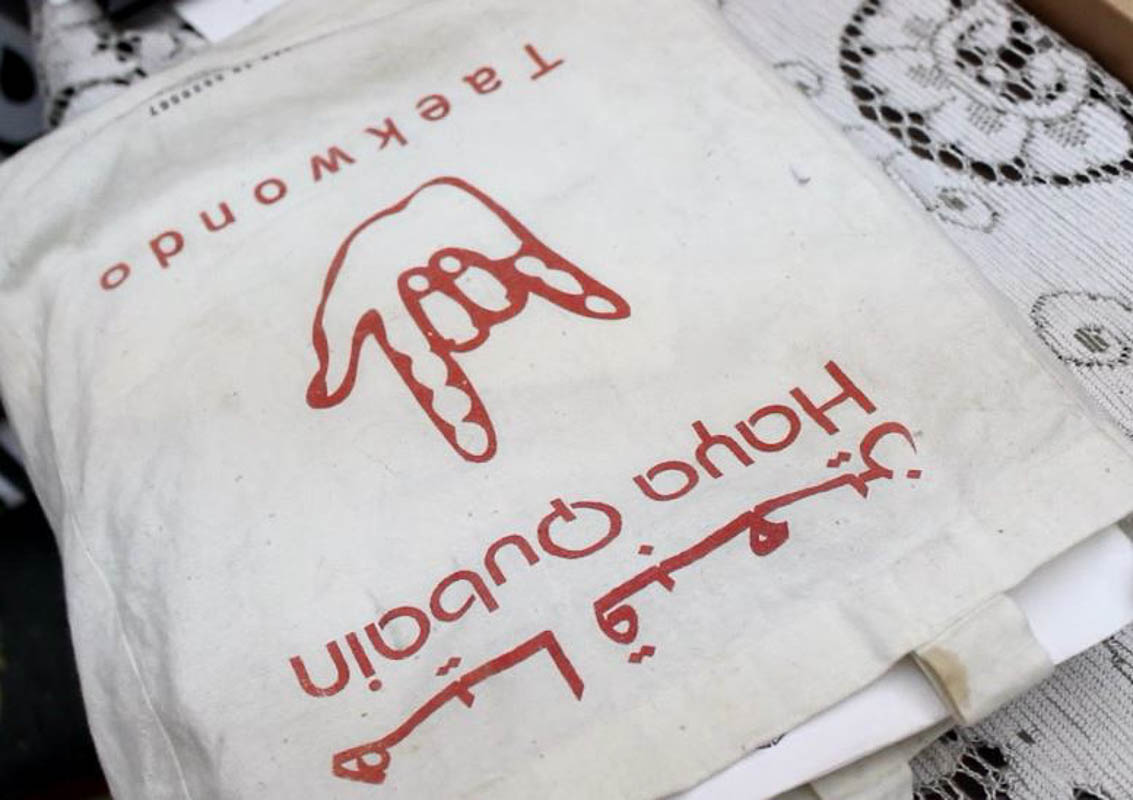 “It’s a battle, one of us will win, either them or me. I’ve been fighting all my life, why should I give up?”

*We have tried to contact the Jordan Taekwondo Federation to try and receive their side of the story, however, they have not yet to respond. 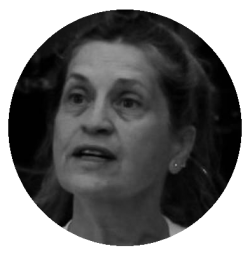 Haya Qubain is a Taekwondo coach and occupational therapist specializing in speech and hearing, also in utilizing Taekwondo to teach special needs kids. She is the first female in Jordan to receive a black belt and globally, one of the first international referees for Taekwondo in Canada. She has dedicated her life to the sport of Taekwondo and helping children with disabilities. She has written a book on working with people with special needs, Taekwondo in a Different Way, and is currently working on a new book.

Haya believed in spreading awareness among people about disabilities and the rights of women. She wished to fight for her rights in a legal case against the Jordan Taekwondo Federation.