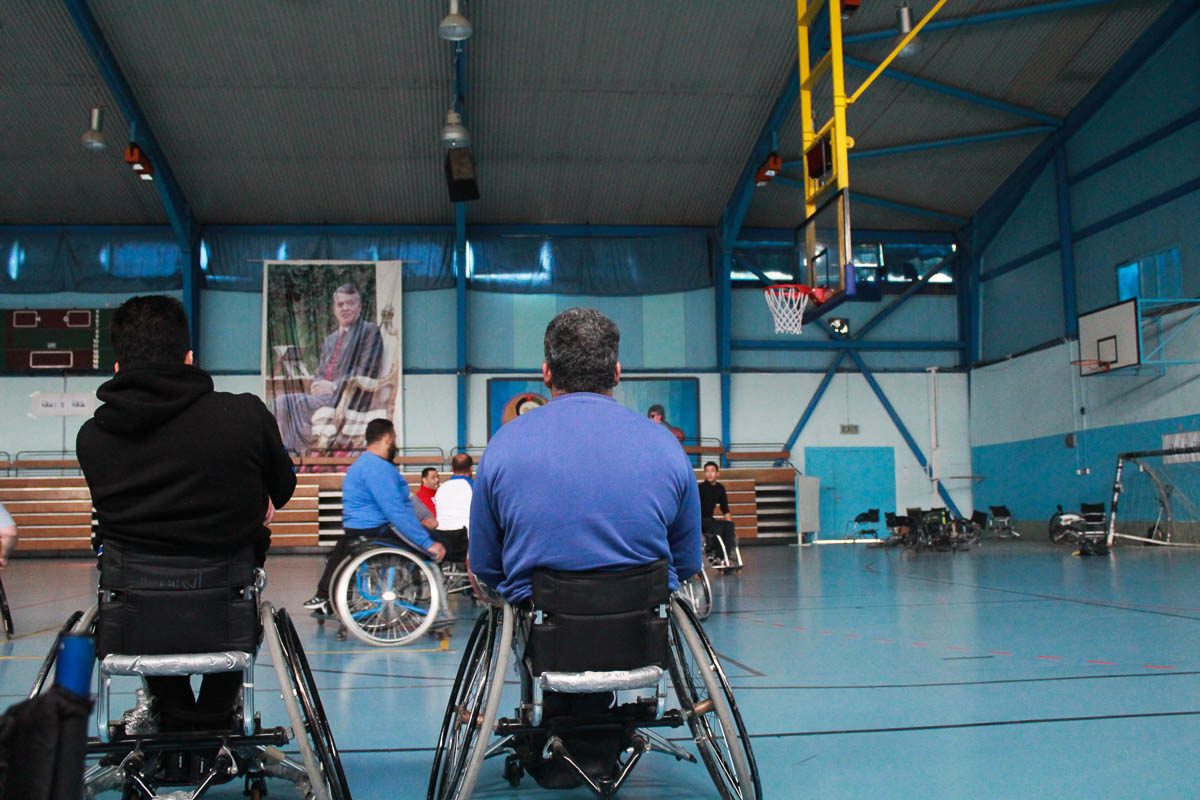 The thumps of a basketball being dribbled back and forth and the smell of sweat in the air, the Jordanian wheelchair basketball team regularly meet on a weekly basis for practice.

All with different background and stories, the team showcases a great deal of diversity, with some mad skills exceeding even those with legs.

Despite being in a wheelchair, however, many stated the importance of being treated just like anybody else, especially through the eyes of a condition that is constantly stigmatized. 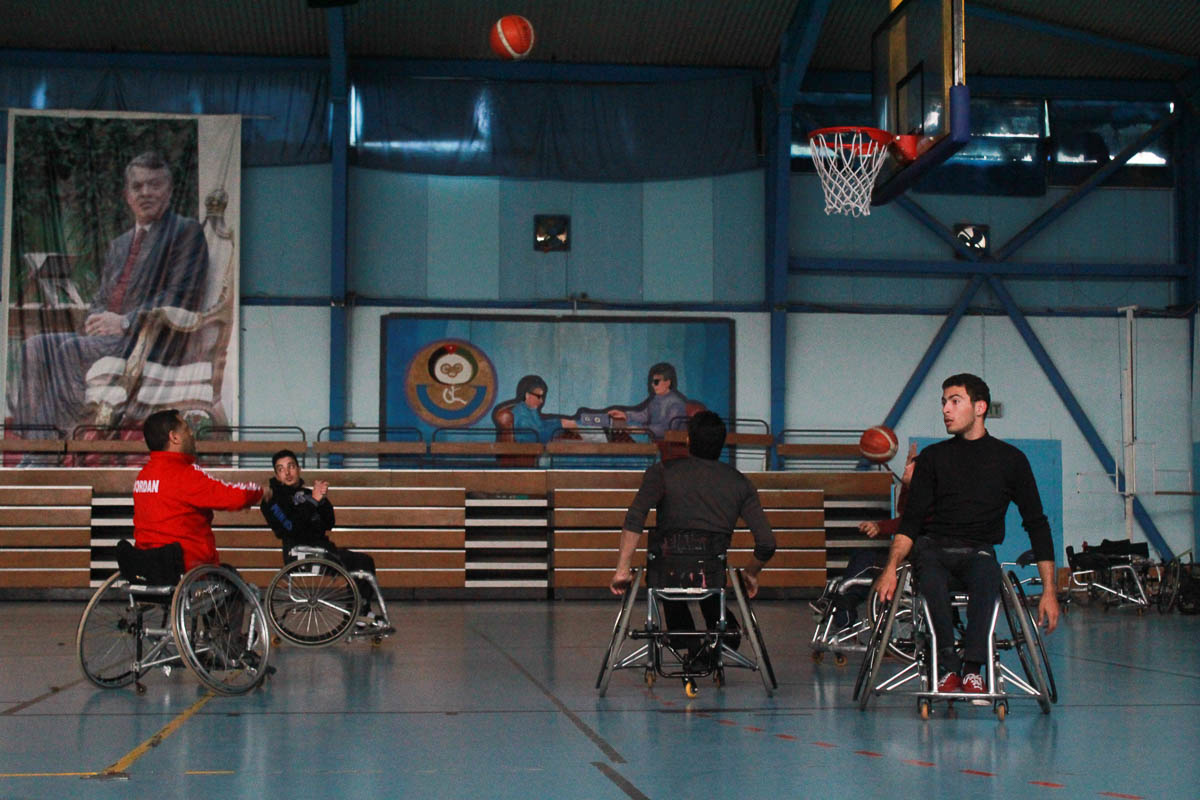 The term “disability” has always been one filled with stigma, questions and a sense of pity. Despite the judgements that come with being disabled, Jordan seems to be stepping up its game when it comes to the Paralympics.

The Jordan Paralympic Committee is known to be one of the best of its kind with multiple athletes representing the world stage. This is no exception for Jordan’s wheelchair basketball team Ajial Al Ghad.

One of their senior players Osama Muneer Abukhater believed people with disability should have more options and be active within the community.

According to a 2017 report by WHO, people with disability are more prone to poverty and lack of healthcare.
Osama himself chose to play basketball to stay active in the community and keep a positive spirit for himself.

“I played this game because I wanted to prove to myself that I can play and I can do something for the community,” he said.

“[I want] to be a positive person and not stay at home because of my disability and cry about my situation. I want to prove to the people and my family that I can still go on, and prove to my son.”

Those with disabilities tend to stay hidden from society, with many judgemental eyes in the way. It also tends to be more difficult to find a job, especially in Jordan.

Only 7.7 percent of the disabled population represent the job market, with 9.9 percent of people with disabilities aged 15 and above currently unemployed and actively seeking for jobs, according to the Jordan Times.

Osama started playing in Ajial Al Ghad in 2005 and joined the Jordan National team in 2006.
He lost his leg when he was four years old, by a passing car.

“My family then took me to a club in Irbid to see if I can play any game, there was a coach that approached me, at that time I was only eight years old, he told me to come and play.

“I started playing basketball then in university and then I started again in 2005 until now I still played.”
Osama said he started to play because of his health, which eventually evolved into personal ambition.

He believed people with disability should not be afraid and should be part of the community, something he is doing himself.

“I want to start seeing disabled people in the Parliament and Congress, I still see many people stay at home, they should go out, see the world, see the community,” he said.

“They should not be afraid of anything, they can do anything. Nothing can stop us or make us feel negative that you are not a good person in the community.”

“When I was six years old, my leg stopped growing so they had to amputate the foot and then they gave me a prosthetic,” 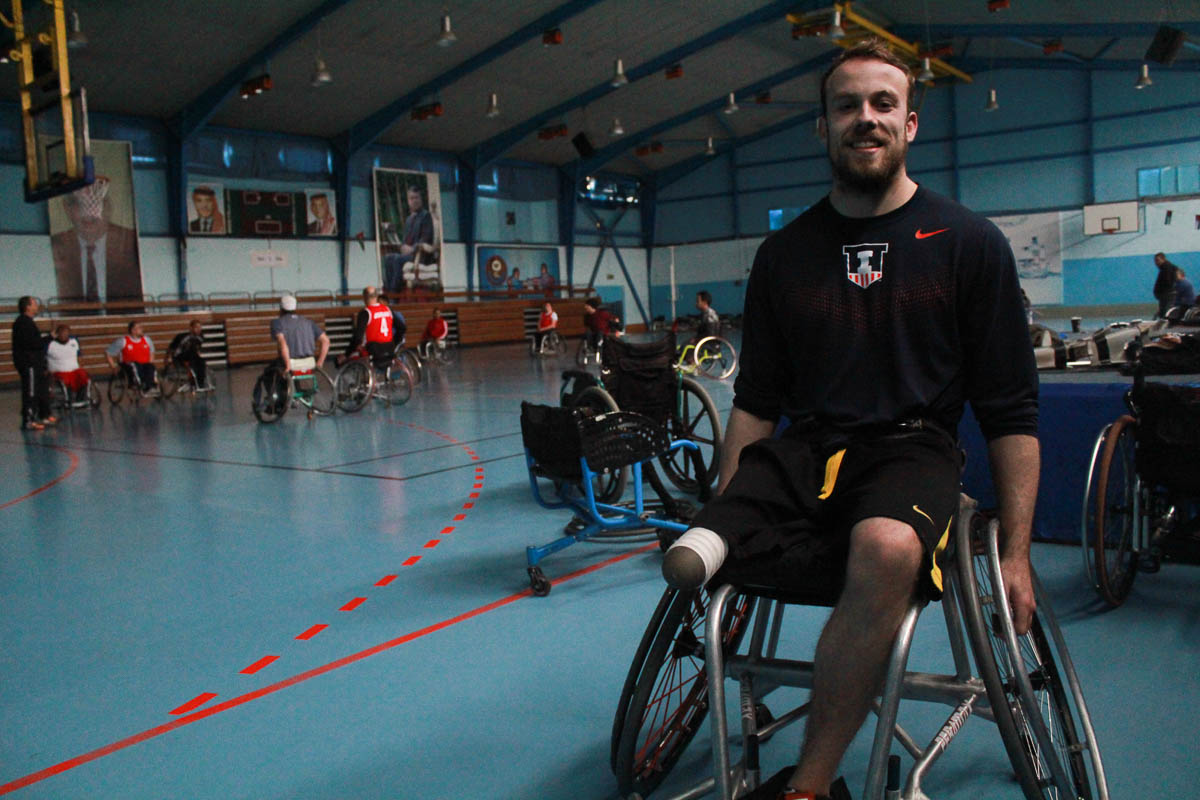 Derek Hoot, a wheelchair basketball player from the United States.

Blond hair and blue eyes, Derek Hoot stands out amongst all the Arab player in wheelchairs.

Derek has been playing with Ajial Al Ghad for only a few months after coming to Jordan to study Arabic.

Originally from the United States, Derek started searching for the local Paralympic basketball club once he moved to Jordan, only to find the coach and becoming a member of the team himself.

Despite just joining the team, he has been playing for over nine years.

“I’ve been playing for nine years. When I was 14 in the middle of high school and then the University of Illinois and a couple of cool opportunities here and there,” he said.

“Like there was a USA developmental team who went to this little town in Japan…and it’s a friendly tournament, but it was between USA, Great Britain, Korea and Japan, so that was really fun. I got to say what an international play look like.”

The basketball player lost his leg when he was six years old, due to a birth defect.

“The reason I am an amputee is because I was born with a thin aorta, which is the biggest artery in your body and what it did is that it cut off the blood circulation to my growth plated in my right knee,” he said.

“So when I was six years old my leg stopped growing so they had to amputate the foot and then they gave me a prosthetic.”

Suffering from hypertension, Derek also had his kidneys removed, which halt his ability to play contact sports.

“Then I attended this event in Madison Wisconson area and a kid came up to me in a wheelchair and said he was in a youth basketball team and said they were actually looking for amputees,” he added.

“And that’s how I got into it on a youth level.”

Along with his fellow teammate, Derek wanted to see the disability community grow and be more involved with society, whether through sports or elsewhere.

“I would like to see an awareness campaign of adapted sports in Jordan and start working on assembling a team, maybe to write grants, of course, this is a little bit of a long shot because these are huge grants,” he said.

“There’s also a stigma around disability a little bit, so getting funds for that is a little bit of an uphill battle, but it would be really really cool to accomplish something like that.”

“I was paralyzed when I was four years old because of poliovirus,” 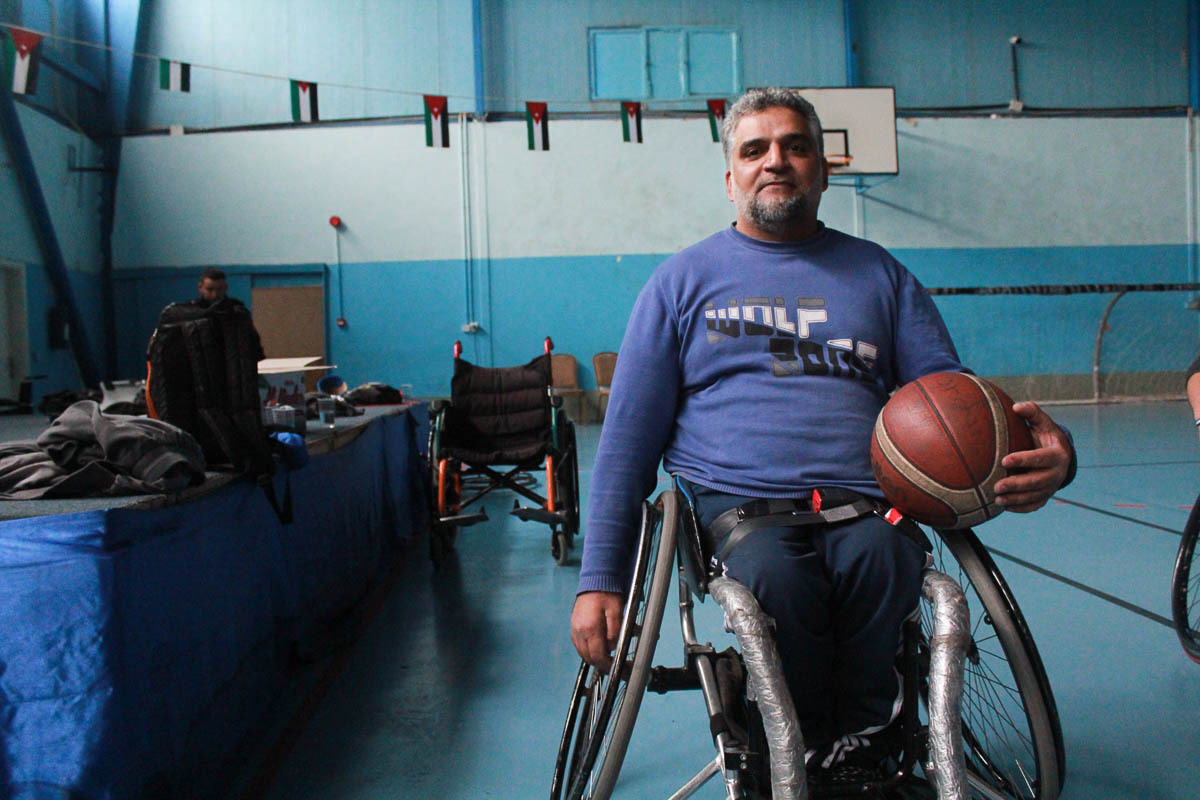 Abu Omar, the coach and founder of the Ajial Al Ghad team.

“My goal is that the Federation will do the right thing by providing enough coaches and that is illegible, that there would be basketball in general,” he said.

Abu Omar started basketball when he was studying at a centre for the disabled in his hometown of Mafraq. H eventually found the beauty in basketball.

“We were playing outdoors, it was my first time getting introduced to a sport for the disabled where we couldn’t move or walk,” he said.

“That’s where I started developing more ideas through sports.”

This curiosity eventually led to his coaching career.

“I began coaching because I felt I had a responsibility, I wanted to develop the basketball scene,” he said.

“This meant that I had to bring my own players so I could develop and shine with them. I also had to teach them how to use the wheelchairs and how to pass the ball around. I have to develop from Jordan.

“I also never want to forget the fact that I’m a player too, I love this game.”

Abu Omar has been with Ajial Al Ghad since 2013 as one of the founders and the team has been running for around four years currently.

Fighting for the disabled

The basketball players wanted to see a change for those disabilities and stated their hopes for Jordan’s development, as well as support from the world in general.

“As a club owner, I should be provided with a fully equipped gym, the fact is I’m renting the gym, so I wish to have my own base and my own gym where we could do sports,” Abu Omar said.

“In Mafraq, we don’t have a lot of people that play sports but there are disabled people that can’t even go out of the house or meet new friends or do anything, so for me, sports is a door for people to meet

“I met new friends from sports and my teammates and I met Derek. I wish that as a club, it would be stable. I want people to know how we feel because we are tired of paying for everything.”

Derek also stated the importance of wheelchair basketball for disabled people, as a way of being respected.

“[Wheelchair basketball] is important in a lot of ways. One, it gives disabled youth confidence and it socializes them and it gives them social skills, self-advocacy things and soft skills we talk about,” he said.

“And then it’s also a perception thing when the community sees us playing a competitive sport who they normally think is a weaker part of the community, it changes their perception.”

“You do not need to be afraid, you should try and go out,” Osama added.

“If people look at you if you are disabled, it’s not a bad thing, because it challenges you to prove to them you are a good person.” 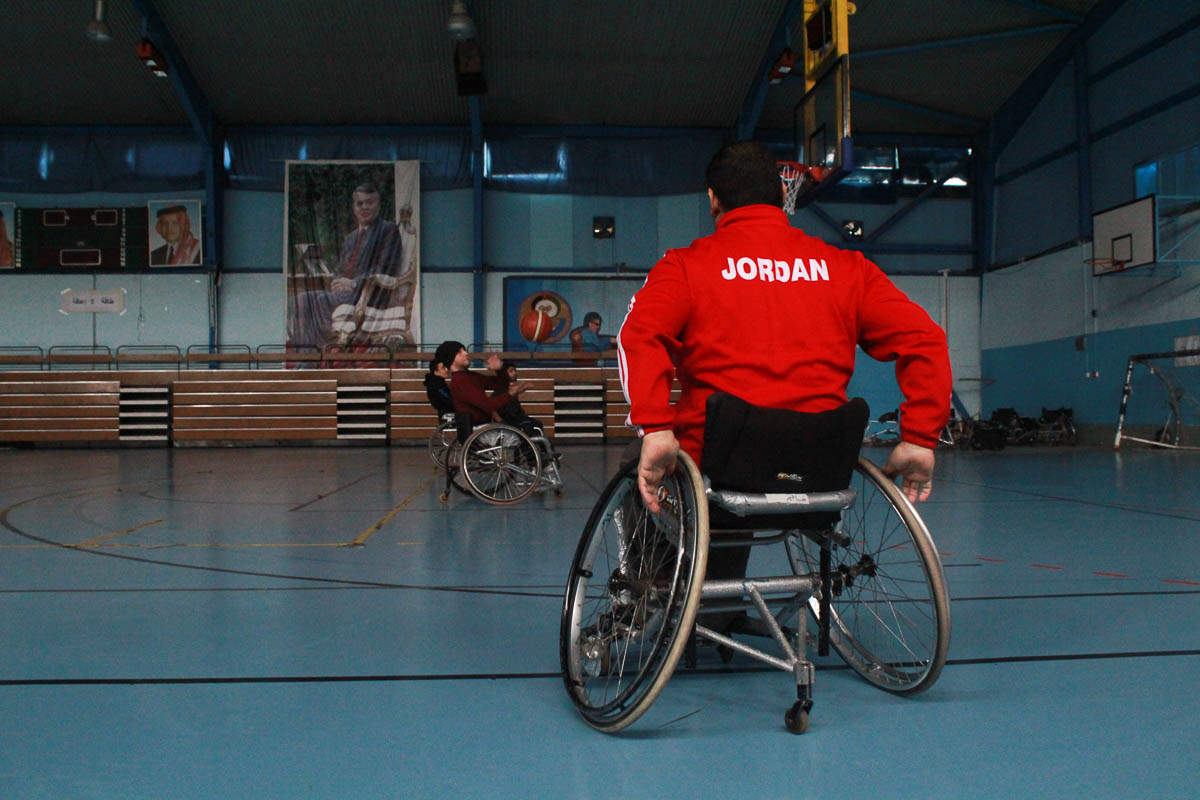 “If people look at you if you are disabled, it’s not a bad thing, because it challenges you to prove to them you are a good person.”

In a world where stigma still exists for those with disabilities, it will not be an easy challenge to overcome, but with Jordan’s Paralympic Committee known to be the birth of amazing athletes, we are looking at a step up in normalizing the disabled.

If we look at the world’s developments today, more countries are trying to step up their game in providing support for the disabled.

So maybe there’s hope yet. 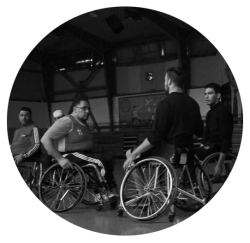