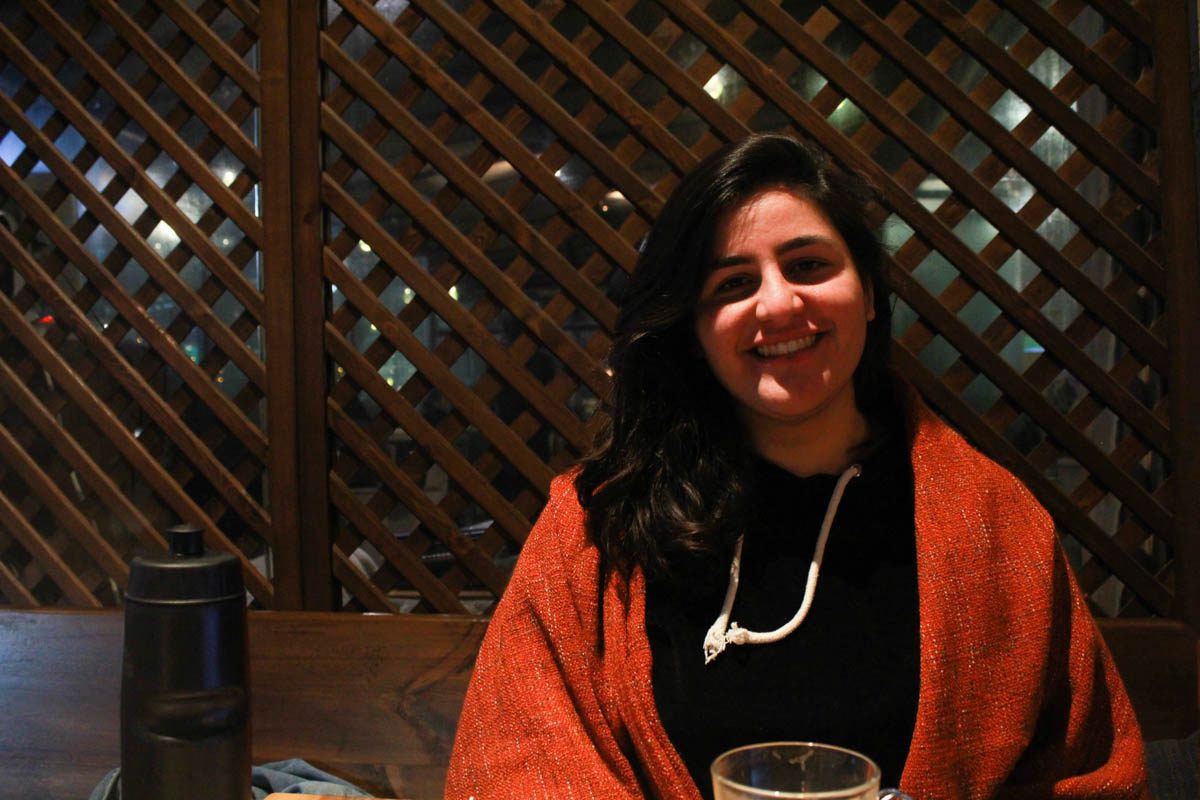 “I wouldn’t say it’s my career, I would say I want it to be my side business to enable me to do what I love, and at the same time, I want it to be beneficial for the people of Amman,”

Jordan, with a complicated economic situation, does not help most young people with a successful start. According to Trading Economics, Jordan’s unemployment rate reached 18.6 percent during the third quarter of 2018. On the other hand, many people are working more than one job to make ends meet.

A law student and founder of her own online business felt having two options was the only way to get by and do your own thing.

“I think when it comes to our spending, we need a lot to keep us satisfied, maybe it’s the media or people around us but we constantly feel we need to own this laptop to feel like middle class or successful,” she said.

Batoul is a 23-year-old university student based in Jordan that’s just trying to live life. Living in Jordan, she felt the hardships of trying to make money while having a good work, life, study balance.

She saw, however, the main happiness factor of most millennials today do revolve around consumerism.

“We have to get this shirt or that perfume, we have to go every week to this bar, we have to go get coffee there, , the expenses we are putting on ourselves nowadays, I don’t think we were there 20 years ago,” she said.

“People are getting $6 coffees every day, I’m literally broke, but I keep getting a cup of coffee, everyday! I’m not kidding! I don’t know why, I just don’t feel good without it.”

Unfortunately, a “happy” life, it seems, equals to having the most items, according to this Jordanian. This, however, is pretty true, seeing how consumer spending is a very popular trend within everywhere and makes up a large amount of a country’s GDP. So essentially, we were programmed to spend to keep the economy running.

Apparently, government spending has gone up in the 20th century and most of those involve social spending, especially amongst early-industrialized countries, according to Our World in Data. Social spending includes spending on health, old age, family, housing, unemployment and more.

Now, of course, each government differs from one another, but Jordan has also experienced increases in their spending, and is also a country made out of consumers despite its weak economy.

Batoul felt it was not all about consumerism as well though, she felt, culturally, many people have become too dependent on other people.

“Another part is, something specific to Jordan, I don’t think that this generation has grown up with a work ethic,” she said.

“We are very dependent with our parents until something happens where our parents can’t provide anymore, which is sad because all of a sudden, three months, one year, whatever, you went from taking money from your dad 500JD a month to them not being able to provide, so then what do you do now?

“So I think people should start teaching their youngsters from a very young age, how to spend money and work hard for their money and that money doesn’t grow on trees, because a lot of us are like that.”

That said, as a student, Batoul also felt another strong barrier when it came to making wise decisions, education.

Why is it so hard to get proper education??

“You are not getting an education here, you are just getting money thrown out of your pockets for 12 years and colleges are not any better…,”

Education is a constant debate everywhere. People most likely would have complained about the education system in their country, Jordan is no different.

Having studied all her life in Jordan, Batoul was not fully satisfied with the education’s current state.

“…mostly, the studying I do in law is self-taught, most of it. That’s why I have a hard time,” she said.

“One of our professors wrote a book on the subject and he literally comes to class and reads it out loud. That’s his class, reading a book, that he made!”

Jordan’s gross enrolment rate has been decreasing throughout the years, as well as its secondary completion rate. Though the changes were small, they are still decreasing. That said though, Jordan has achieved universal primary education with around 96 to 98 enrolment rates, as well as quite a high literacy rate.

According to World Bank, the total government expenditure for education is 11.7 percent in 2017.

“It’s a business. Public education is horrible, so you have to pay a lot of money to put their children in private school and private schools are just using them for their money and not giving them skills they can use for their careers…,” she said.

Having studied abroad, Batoul compared the quality of studying in Jordan and during her time in the United States, where she felt people cared more about education.

“In the US, I didn’t think about the grade, I was just enjoying the classes,” she said.

“And the professors were amazing. I remember the second semester I was so busy with packing and moving and I ended up not going to my finals, and my teachers contacted me, I mean I’m not even getting grades for this when I come back, but they contacted me and I thought that was crazy because if I did this [in Jordan], I will automatically get an F but there, they care, you know? Which is nice.”

Finding a path to law

As with trying to achieve your dreams, comes confusion. Many people today are set with a million options in finding their career paths, at the same time, faced with many limitations and salary inequality.

In trying to find her path, Batoul weighed in all the options.

“So I started uni in pharmacy and I didn’t want that actually,” she said.

“I wanted to do medicine and specialized psychiatry but then I couldn’t, I went into pharmacy because my average didn’t allow me into med school and I thought, ‘you know what? I can just switch after doing a year in pharmacy,’ because you can switch to medicine if you have a high GPA in college.

“That didn’t happen because in the second year of college I got a scholarship to do an exchange in the US and I went to do that.”

Originally, when she went to the US, Batoul was supposed to do chemistry, which was not available for ungraduated programs, so she eventually took a lot of international relation classes.

Turns out, not studying chemistry was actually a great thing.

“We studied a lot about US law, while doing these classes and I kinda liked it and it was a good way to impact society, being a lawyer.

“This was in the US from the people that I saw, so that was the first idea that was implanted in my head about law.”

“So when I came back, I registered again for pharmacy and that summer I got really depressed coming back to Jordan,” she added.

“I just hated everything, so I decided to drop pharmacy and I had a whole summer to think about it and my mom said one day ‘why don’t you go into law, you wanted something that is social, it’s a good career, it pays well,’ and I was ‘ok, maybe,’ so then I registered for law. That was it basically.”

Most millennials today are surrounded by a huge information base, creating mindsets for various opportunities and career options. According to Gallup Polls in the US, 21 percent of millennials said they’ve changed jobs within the past year, which is higher than most generations.

All bias millennial information aside, this generation has also produced a lot of entrepreneurs.

This ambitious Jordanian started her very own green online shop to help with her finances, in addition to creating a more cruelty-free world.

“Green 360 is an ethical green everything store. Skin products, healthcare products, makeup, things you wouldn’t typically find in Jordan that are vegan and cruelty-free,” she said.

In fact, starting Green 360 is one of the main reasons why she started rethinking a career in law. And why is that?

“In Jordan, you cannot be in the Board and do something that is commercial, like you can’t own a business, you can’t be on a board of a corporation and be practising law, and I feel that owning a business is the only way you will be able to make any real money in this country, to be honest,” she said.

“Think about it, how much more money can you make owning a business? If I have a business and become successful, I can work in five years and make the same amount of money as I would if I were to practice 20 years of law.”

Batoul also said she could always still go into law, however, not limit herself to only being a lawyer, like perhaps being a legal consultant and still have her business. She would like options for her career path.

“I wouldn’t say it’s my career, I would say I want it to be my side business to enable me to do what I love, and at the same time, I want it to be beneficial for the people of Amman,” she stated.

“I want people to know it and know this name as something ethical and not some large corporation that is out to take your money and give you bad things for your skin or things that are unethically done to humans, like harming people in the process, child labour and things like that.”

Towards the end though, this Jordanian mostly wanted something more than money, which is to be able to reach her personal goal.

“So my ultimate goal is to be able to live these ideals.”

So yes, in choosing a career path, money is always essential and there are a million ways it can be done, however, according to Batoul, despite the overwhelming pressures of life and choices, just simply trying is the most important part.

“If you don’t try, the answer is always no, right?”

Batoul is a law student based in Amman, Jordan and owner of her own green online shop Green 360. She currently sells all types of products that are cruelty-free and eco-friendly. She hopes to create a greener world, especially for Jordan, one step at a time; at the same time, limiting the cost needed for these products. She looks to travel abroad for her education and experience different career options and experiences.