The PhD professor driving with UBER for a living 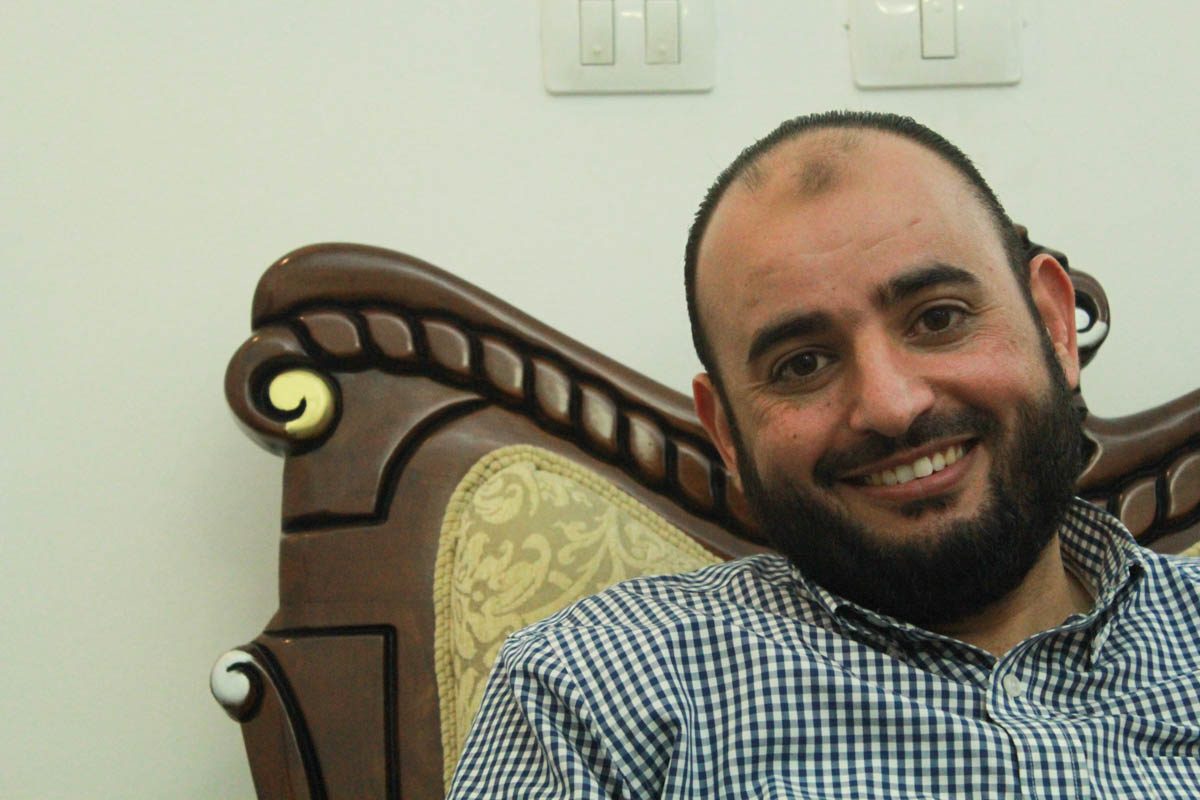 The PhD professor driving with UBER for a living

As you grow up, thus comes the responsibilities of providing for yourself, your family and or being faced with massive amounts of bills and debts.

This has led to the need for people to find jobs. Yes, jobs are a constant topic of agony and many people today are still struggling to find one all over the world.

The global unemployment rate in 2018, according to the World Bank holds off at 5.4 percent, which arguably may be less than it has been in the past years, however, why do so many people struggle to find jobs still?

If we look at a closer look, Jordan, the country with an all-time high unemployment rate of 18.7 percent, struggles greatly in trying to provide more jobs. So much so, it has led to some PhD holders unable to find jobs.

Reyad is a Jordanian local, a father, husband and UBER driver, he is also a university professor with a PhD in Islamic finances.

As work is becoming scarcer, UBER is functioning as a great job opportunity for some people, including this PhD professor. So, if a PhD graduate is settling to become an UBER driver then what is happening to job opportunities?

“I applied to over 100 universities in the Arab world. Actually, nobody called me back, it’s sad,” he said.

The start of it all

Before returning to his home country of Jordan, Reyad had a job as a university professor in Malaysia. He was teaching Islamic finances and banking from 2012 to 2015.

“It just came up without a plan. My wife told me there was a job in Malaysia and just like that, but it’s really my luck, I love Malaysia,” he said.

After finding a teaching opportunity in Malaysia, the Jordanian moved there to pursue his teaching career. Unfortunately, after two years of working and living there, he needed to go back to Jordan due to his father’s deteriorating condition.

“I taught more than five subjects and I stayed [in Malaysia] until 2015, but because my father got sick, I decided to stay by his side,” he said.

“In November [2018] my father passed away. After that, I looked after my big family, my brother, sister, mother and applied for every work you can imagine in Jordan, even in the Gulf and other Arab states, I got nothing.”

Reyad said he had been applying for jobs since his return in 2015 and was still struggling.

This led him to apply for UBER, where it became his daily occupation.

“I just spent my time applying for jobs and I went and travel to Malaysia, Thailand and Turkey, to look for a university job, because that is my field. I’m comfortable teaching, I like teaching and I find myself there.”

As a man who saw himself in the education realm, Reyad was focused on finding a job in education, which unfortunately remains quite difficult in the country.

“I only applied for education. I feel that I cannot do anything except that. I think all the fields, especially in education, we have a lot of certified people for education,” he said.

“And in schools and college, around 200 people apply a month and they offer low salaries and everything.”

Jordan is famously known for its wasta system, which typically means “connections” in Arabic. The whole basis of the wasta system is to try and earn a job through your connections.

“In Jordan, one of my friends, he’s a dean at a university in Jordan, he called me and asked me to teach three subjects, in English, not Arabic.

“He told me he had a job part-time to teach three subjects and I should make the materials and syllabus and teach. I said, ‘ok, I can do that.’ He said he would give me [a certain amount] for the whole semester. A I calculated it, it was around 300JD (around 400 USD) a month.

”It’s not even enough for the gas in my car. That’s so cheap, even teachers at the elementary school get paid 400 or 500JD, and this is sad.”

The difficulties he faced had led Reyad to apply for other opportunities in different countries, to no luck sadly.

“I tried to apply in other countries, mostly in South East Asia and I still didn’t get anything. I applied in Thailand, Brunei, Malaysia and Indonesia,” he said.

“I have the experience, I am certified, and they don’t take me. This is the thing, we do not understand what they need. I answered all their questions, including any personal information, but still, no response or feedback.”

The outspoken Jordanian had also stated UBER was a great alternative for those struggling to find a job.

“[UBER] is useful when somebody needs money right now. The money you take from UBER you can feed your kids and pay the bills,” he said.

“It’s very good for the country. It really helped me last year, the money was good but mostly meeting people gave me a lot of positive energy. It’s much better than sitting and doing nothing.”

Jordan’s economy is one of the lowest in the Middle East with a GDP of 40.07 billion USD. Though Jordan has tried to make some economic reforms, such as in healthcare and education, more efforts are still needed with the declining of jobs and salaries compared to the high living conditions.

“This is the good thing about UBER, you make money fast. People here like fast money because they need it. They need to feed their kids, pay bills for the house, electricity, water and phone,”

Despite the struggles, Reyad still seemed to take in everything with a positive attitude, endurance throughout his life.

Though a man with a plan, he said there were plenty of opportunities if the first plan did not work out.

“I have a lot of ideas. I can do business in Jordan, my own business, but I haven’t started because I plan to get out,” he said.

“[Before my PhD,] I started my own business in Jordan, selling clothes. After two years, then we change the products, we started selling fruit and vegetables. We had a big supermarket,” he added.

So with an upbeat attitude and opportunities for business creation, why is Reyad still just hanging around as an UBER driver?

“Actually I have another story, I got married in 2011, with an American citizen. I applied for citizenship since 2011, until now, I still haven’t gotten the citizenship,”

With a huge and beautiful apartment, you would tend to wonder why it was so empty and where were Reyad’s wife and kids – having brought up many conversations about them.

“In the last 6 months, they said our case had past, and on the 10th of July we had an interview with the American embassy, my wife and I got approved,” he said.

“They said congratulations I got approved for my visa and they said they would send through all the papers and I said ‘ok.’

“We packed all our things and booked a ticket, and then after two days we went to collect the passport and we found there was no visa for me. They said my case went to the administrative review. I was shocked and my wife was crying and shocked, and we already booked all the tickets, for the kids as well.”

With a heavy heart, Reyad told his wife and kids to go ahead without him while waiting for his visa, and had been waiting for it since.

“You can’t even have any contact from the embassy, I tried calling they never picked up.”

Immigration to the US has become harder for within the last years, especially during the Trump administration. It did not help that during this time, Trump issued an immigration ban for five Muslim-majority countries.

“I’m hoping I will get the visa [soon], after that I will go to New York and I have a job there waiting for me,” he said.

Reyad’s wife and her family is from New York and she is currently working as a teacher in the States. Something Reyad hoped to follow soon after.

How to rearrange the stars

All that said, Reyad is still very patient about his current situation and believed only good things could come of it.

He wished for the best and saw great opportunities ahead, sure he would be reunited with his family soon enough.

“They said there was no reason why I didn’t get [the visa]. They said it was a security matter, because we’re Muslims and Arabs,” he said.

“I’m grateful, whatever happens, it’s Allah’s doing. I have a lot of patience.”

This entrepreneur also felt the importance of creating a career opportunity for yourself and fighting for your passion. However, he did also understood the hardships of finding a job and being able to create that network for yourself.

“It’s so hard starting a business in Jordan because you need a capital. If you have capital, it is ok, then you face the challenge of if you do not have a background about your business, you will get lost,” he said.

“I am good at business and I am a successful business man, but I like teaching at universities. This is why I just sit down for two years,” he added.

Whether you are chasing your passion or just looking to make a living, Reyad felt the number one message to follow is to cease every opportunity you have.

“Don’t trust anyone, trust yourself. I trusted people and they cheated me, and use every moment in your 20s because this is the golden time,” he added.

Whatever happened, this university professor only hoped for the best for his family, especially his children, aiming for greater opportunities in the future.

“[I want] to get my kids a good education, a good life, good advice and a healthy father to grow up with them,” he said.

Reyad is a former PhD university professor, UBER driver, father and husband based in Amman, Jordan. He is a positive and outgoing person who also used to run his own business. He is currently still searching for jobs and hoped to find a teaching opportunity in a university, whether in Jordan or elsewhere. Married to an American-Jordanian with two children, he hopes to reunite with his family soon. He is supposed to move to New York with his wife and children, however, he still has not received his visa since 2011. He is currently still waiting for his visa.