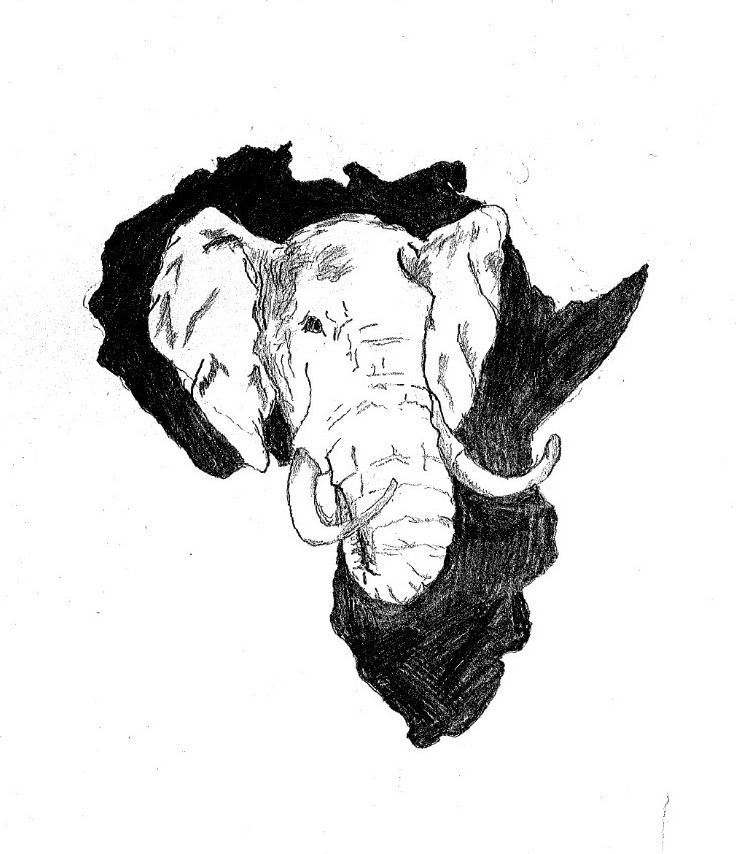 It’s been two years since I visited home. My yearning to make the journey this time was a notch under than the last time, mainly because my mom and older brother were no longer in the country. Mom left for the U.S a year ago, and my brother had returned for his Master’s programme in Ukraine just a month earlier, leaving behind my sister, our house, a whole bunch of friends and relatives I’ve disconnected with after many long months away.

An unconscious communicative technique seems to have birthed between me and everyone else back in Nigeria. We check up on each other through posts on Facebook and Instagram, like or share each other’s posts, somewhat telling of each other’s subsistence, but none ever initiating a conversation.

Leaving Lagos to live and study in a diversely populated Amman had shown me excessively how Nigerians are perceived by people from the different parts of the world. My early times showed me there are things I had always known, but had never had to carry the full weight of. Living as a Nigerian abroad, I embody the whole nation and whatever it is seen as.

It all started with trying to ignite an engaging conversation with others. Establishing my identity as a Nigerian, I scrambled for harmless conversations going through questions of Boko Haram and extreme poverty to corruption and financial frauds and then the flourishing music scene and football. In a way, it gave me an unceasing need to stay attached and be informed on the ball game back home.

I’ve experienced what it meant to be a Nigerian that answered to rigged and factual ideas of everyone and everything going on back home from a varied public. I’ve had some good ones too. My athleticism and the beauty of our football have joined the currently blooming Nigerian music scenery for a few good times with foreigners.

After years of learning and achieving a cosy state as a foreigner, revisiting Lagos this time felt a bit shy. Maybe I worried too much from the daily Instagram posts of @tundeednut, @instablog9ja, and @pulsenigeria247 that’s presently shedding the media light on issues like the constant SARS (Special Anti-Robbery Squad) brutality on youths, their armed corruptness and the budding fear it creates in every other innocent young Nigerian.

The significant uptick in the number of reported incidents with the SARS could be an indication that the predatory activities of the SARS increased over the years.

I was anxious through the long flight to Murtala Muhammed International Airport, Lagos.  My friend Richie kept his word as I found him waiting in the torrid sun just outside the airport entrance. His 2006 Camry showed signs of exhaustion from the grody roads as we drove home. Expected, Lagos traffic choked our trip so much that the darkness of the night that soon fell revealed the absence of electricity in almost all the neighbourhoods. Now I’m Sure I’m Back Home!

I met Richie the previous time I was in Nigeria with my fiancée. It was a different experience then. We stayed at Victoria Island (the posh part of Lagos). This time, I came alone, and with Richie, we were constrained to the mainland due to easier access to the Nigeria Immigration Commission, Abeokuta, to renew my passport the next day. I had bought my ticket out for the day after.

My experiences growing up in Nigeria had slowly lessened its effect on my planning and decision making, after years of living under other efficient and candid governmental structures. I knew I had made a mistake with the date on my ticket to leave. I wouldn’t get my passport renewed in one day.

Another young friend KC had joined the trip to Abeokuta early the next morning. He had always been a good kid, one that was close to my little family so much that he was like a twin to my younger brother. Trusting myself, Richie and KC to make the renewal possible in just one day, the drive quickly filled up with conversations surrounding everything they thought I had missed, and in turn I caught them up on things I could let them in on about my life in Jordan.

It took a second before I realized we had actually been waved down by policemen.  They increased in number forcing a slow right swerve as Richie brought the car to a stop obliging the heavily armed black uniform men.

As a young Nigerian, you needn’t have committed an offence to get harassed and squeezed by the police. Their voices ordering us all to step out of the car annoyed and scared me at the same time. Coercively relieving us of our phones, they searched and decided we weren’t leaving with KC. They had found a white man’s identity logged in on his Gmail account. He was an internet fraudster!

According to Scamwatch, almost $200,000 have been lost to the so call ‘Yahoo boys’ in Nigeria, through internet scams in the first three months of 2019.

Nigeria is a renowned hotspot for internet scams. Conversations with career yahoo boys reveal that this hustle is in no way slowing down. I hadn’t gotten an opportunity to ask KC what he did besides being a student at the university, maybe I’d have figured out he was a scammer sooner.

Nigerians as internet fraudsters has been part of my regular dosage of identification by people overseas. I seemed to have joined the fight against these scammers after confrontations from foreigners and lack of trust for us young Nigerians in various sectors abroad. KC was one of these scammers; I lost my ability and desire to mediate a way for us to bail KC out of this. One policeman who was Yoruba(my tribe) immediately said to me in Yoruba:

“Tete so iye to wa lowo gbogbo yin ki won to pe oga wa,” meaning “Quickly tell me how much you all have on you before our boss gets here.”

This really just happened. The cops bullied us into a body search and mobile phone invasion, infringed on our privacy, and even worse, caught one internet fraudster and requested for a bribe of every penny we all had on us to keep KC from being taken away.

Our encounter with the police was the first cut back on my quest to renew my passport in a day. We had wasted almost two hours of that morning trying to free ourselves from a corrupt set of armed governmental Security officials.

My wise fiancée once told me, “It’s difficult trying to eradicate corruption in a society where its occupants were born and bred into it, making them build survival mechanisms of hustling for benefits to get by”.

Getting to the passport office, this resonated with me for the first time, after a long haul through immigration officials and a crowd of other Nigerians present trying to get their passports renewed. My patience and attentiveness showed me the subtle hush money changing hands between the people and Immigration officials, either to fasten the process or ignore a missing document. This is when I realized the inevitability of the need to surrender to corruption in a Nigeria that threatens hardships, difficulties and failure.

The next morning smiled on me with a certain relief blowing through my senses as I got my new passport right before noon. I immediately had a refreshing reminder of my ability to leave the country, after deciding to ‘wet the ground’ (give bribes) myself, like Nigerians would say, to facilitate the production of my new passport.

The only pleasant highlight of my time in Nigeria ended up being time with my sister, the only person not looking to take advantage of a Nigerian returning from overseas.

My ticket was to Kenya, through Addis Ababa, Ethiopia. Getting to the airport, my seeming relief boiled up into frustration as the lady at the counter refused my check in until I paid for a return ticket out of Kenya. The idea was to go meet my fiancée there, go on safaris and then head back to Amman.  I had no idea exactly when I would leave Kenya, so I hadn’t gotten the ticket.

Forgetting I hadn’t bought my return ticket out of Kenya, I almost broke down after the lady at the check-in insisted I paid for one right there through the airline company she works for or I’d lose my flight. I knew I had no money to pay for a ticket right there but then I remembered it’s not always what it seems with Nigerian workers in all the different sectors.

After several phone calls and speedy actions through the internet with my fiancée waiting in Kenya, I got my return ticket minutes before the check-in closed. Without having to pay a dime to any of these insatiable people, I took off and was finally out of Nigeria one more time.

Getting off a tranquilizing flight from Addis Ababa to Nairobi Kenya, my first perception from the face of the Jomo Kenyatta International Airport exceeded every international and local airport I had seen in Nigeria. They had WIFI too. A little smile crept up the sides of my mouth as I filled the immigration form and hastily joined the queue for my Visa on arrival.

With happiness and an enkindled yearning to wrap my hands around my fiancée waiting at the exit of the airport, I stood in line with Asians, other Africans and a few white people I imagined were in Kenya for its famous safaris and beautiful beaches. A tap on my shoulder brought me back from the bubble I was in. She was a slender Kenyan woman, casually dressed with a card hanging from a badge holder on her neck that read ‘KENYAN IMMIGRATIONS’ boldly.

She took me to a little office close by. I watched an Arab man I met in the room argue with a seated light skinned Kenyan immigration officer. The Arab was enraged about the need for his presence there having confirmed he had all of his documents. I thought to myself: This is Kenya, not corrupt Nigeria. This man better check his papers again.

“Where/who are you staying with?” the officer asked me.

Trademark Hotel- Village market is one of the highest rated hotels in Nairobi, Kenya. Its price and luxuriousness coupled with being located in the same compound as one of the biggest malls in Nairobi should have alerted me of the reply I got from the seated man behind the computer.

Not here again. Not Kenya too. The Nigerian in me kicked in immediately. I picked up all my papers, walked out of his office without seeming to have heard what he said or bother replying. I went back to the shortened queue, paid the only required $50 at the counter, got my visa, and walked out into my fiancée’s waiting arms.