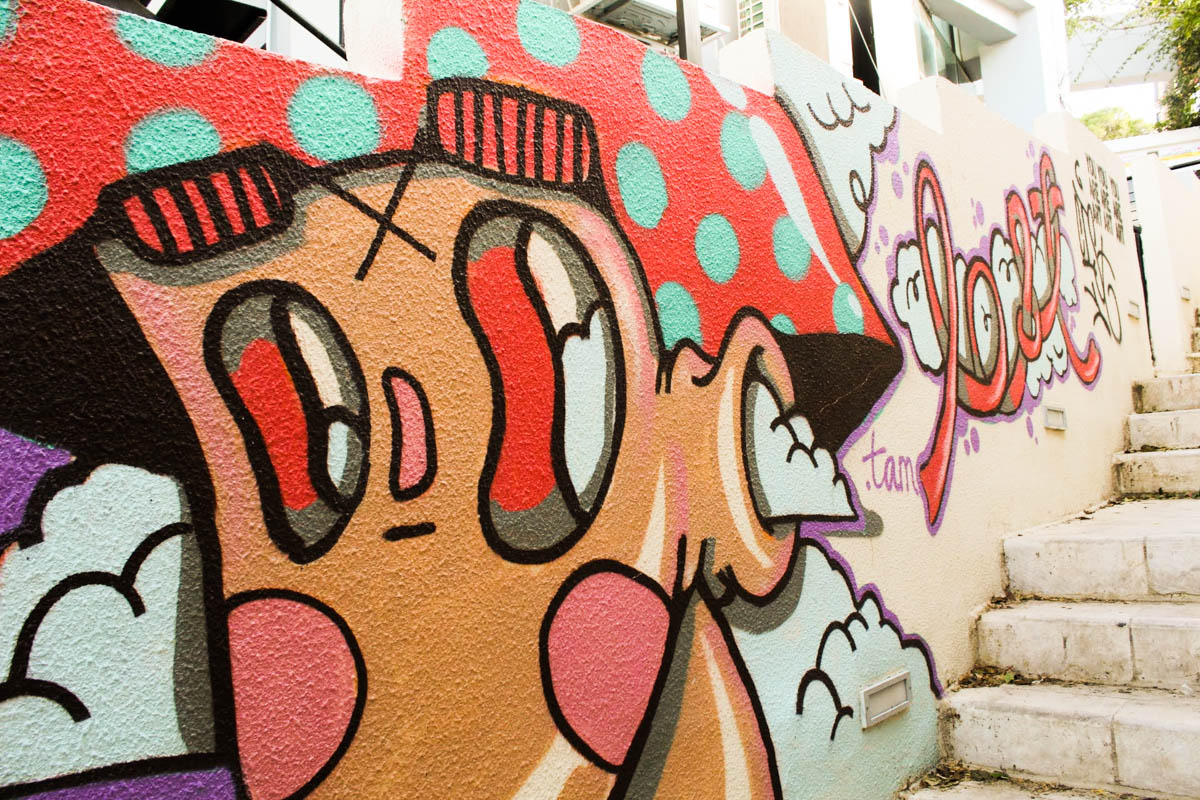 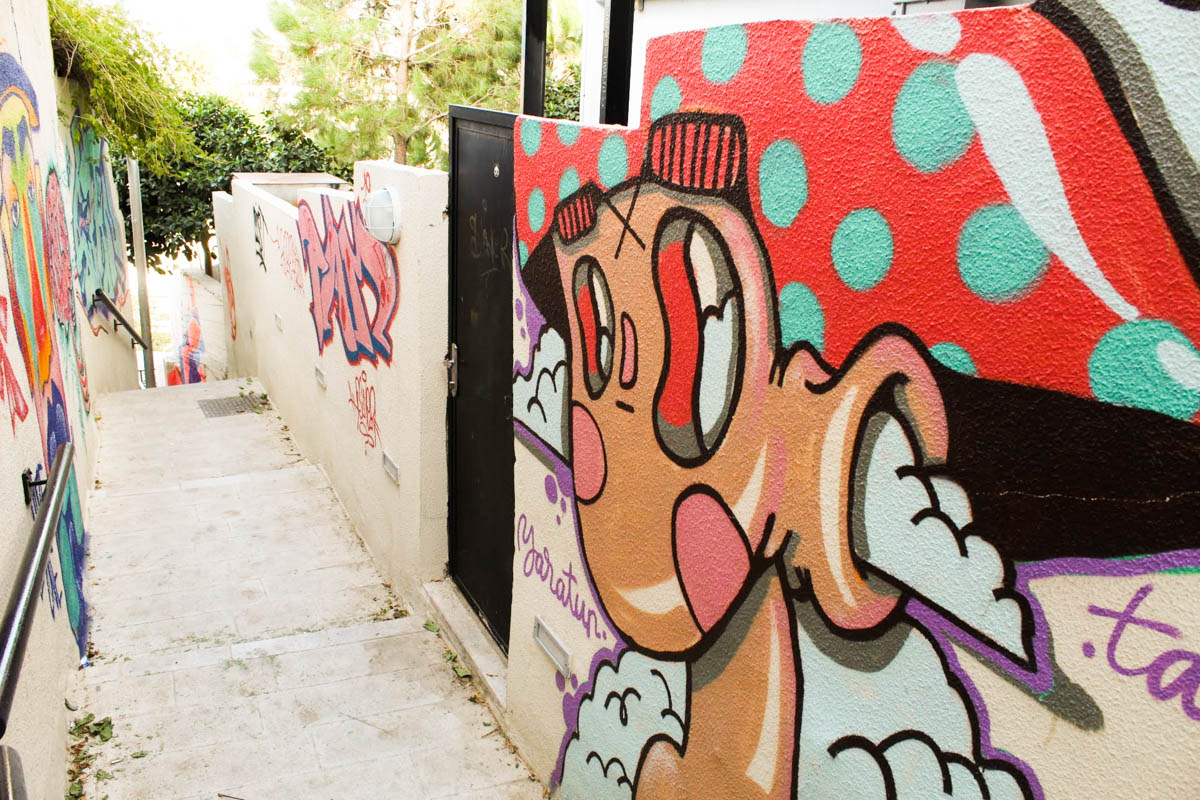 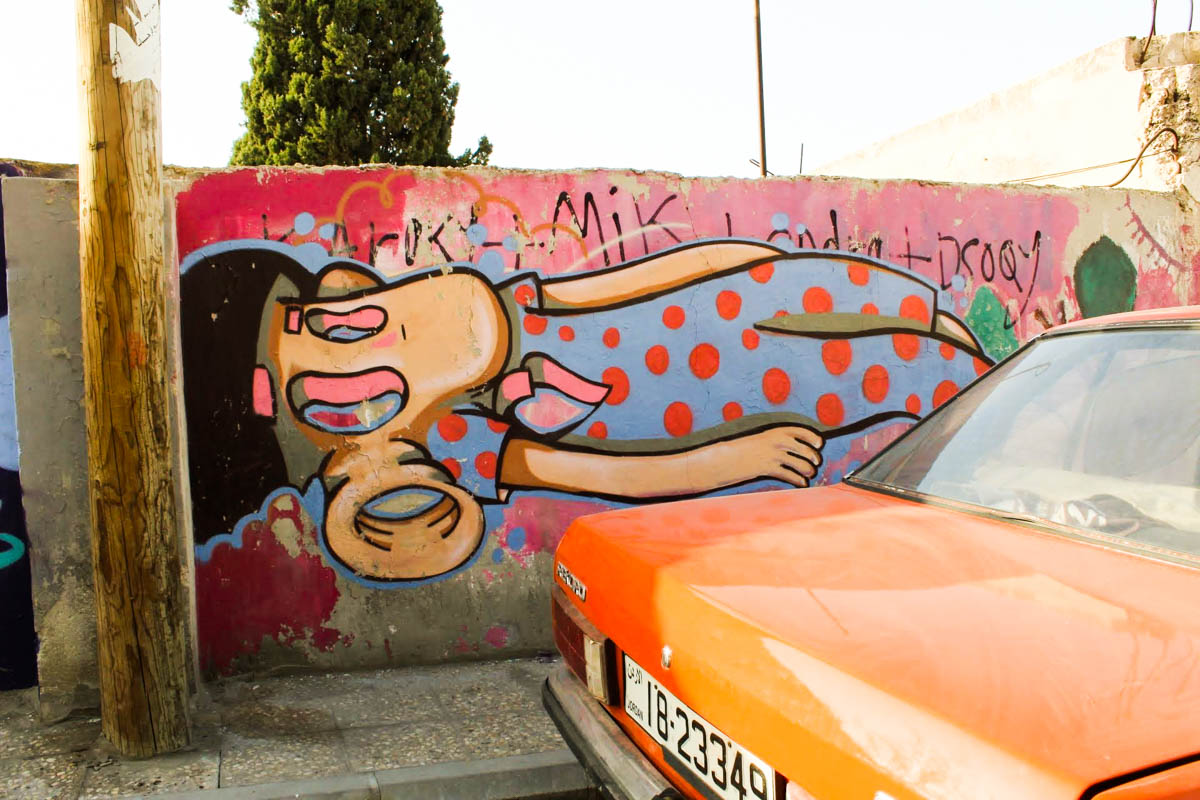 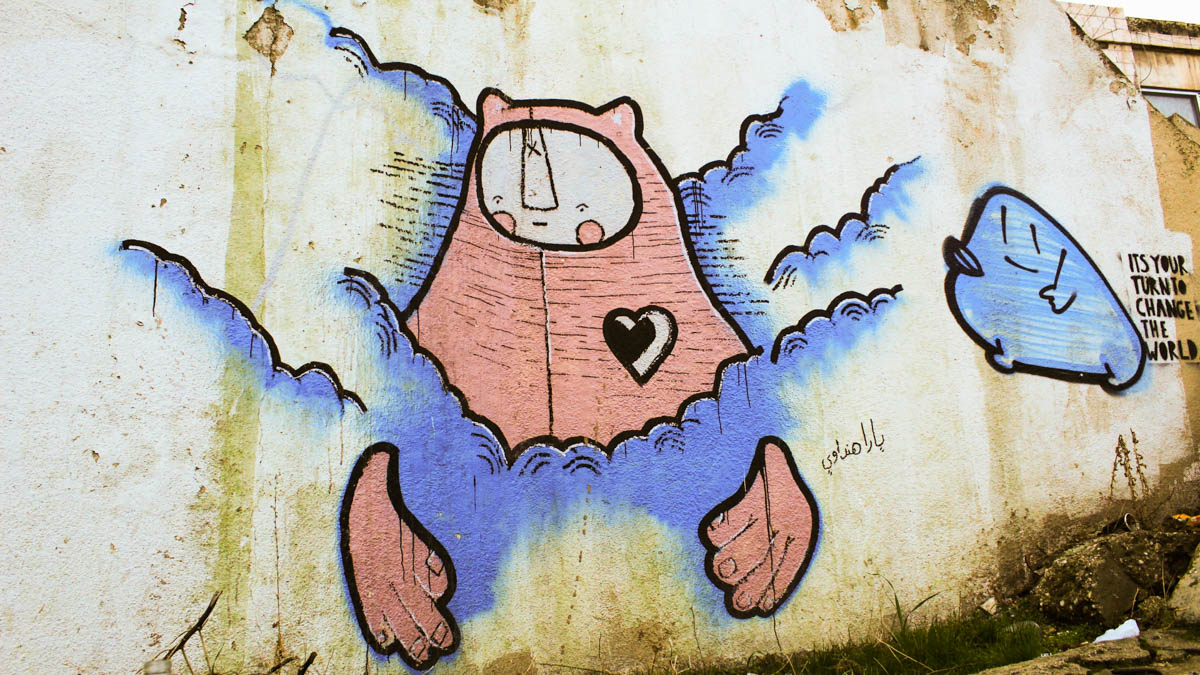 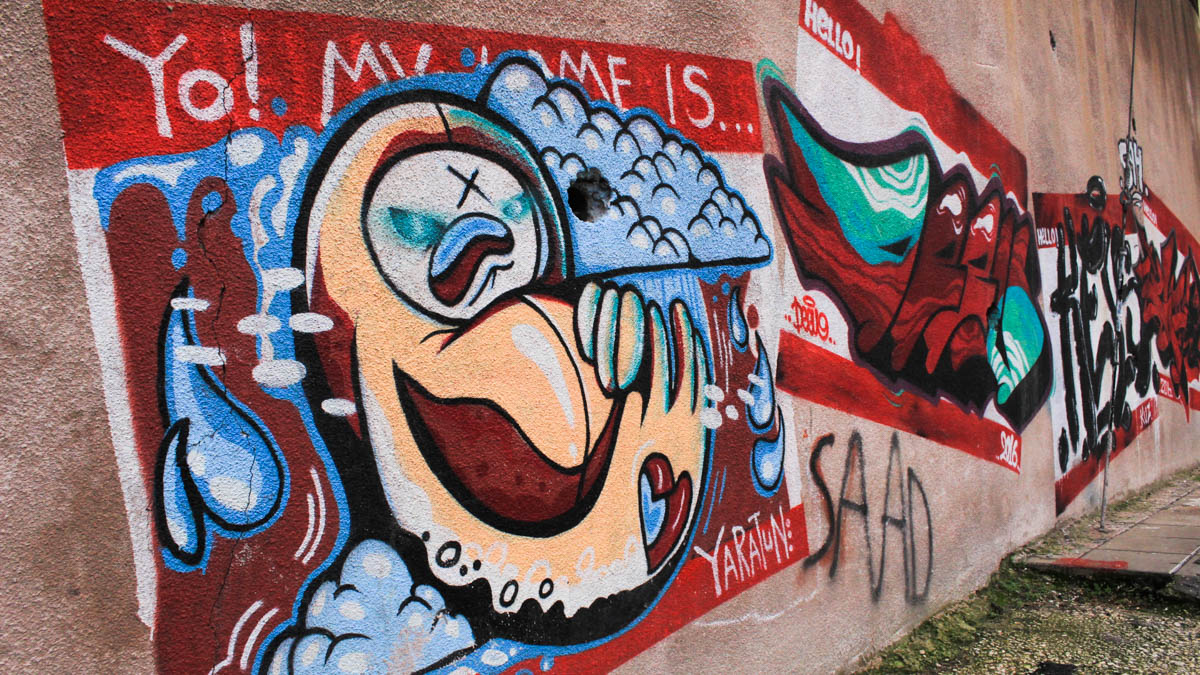 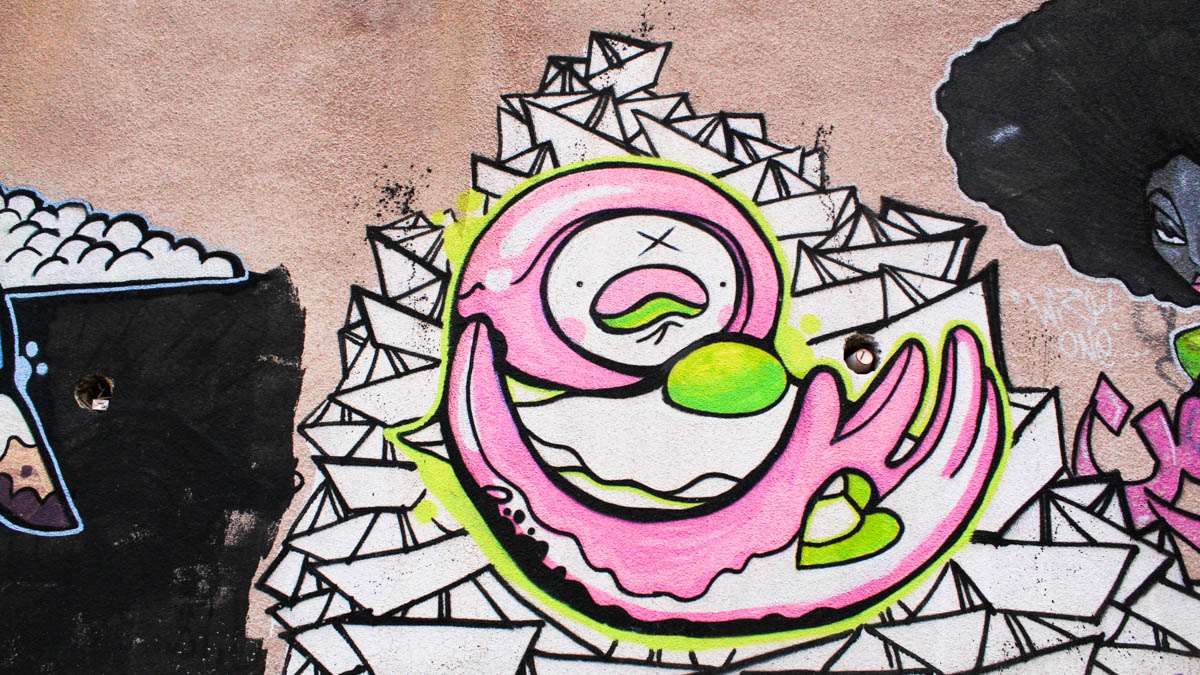 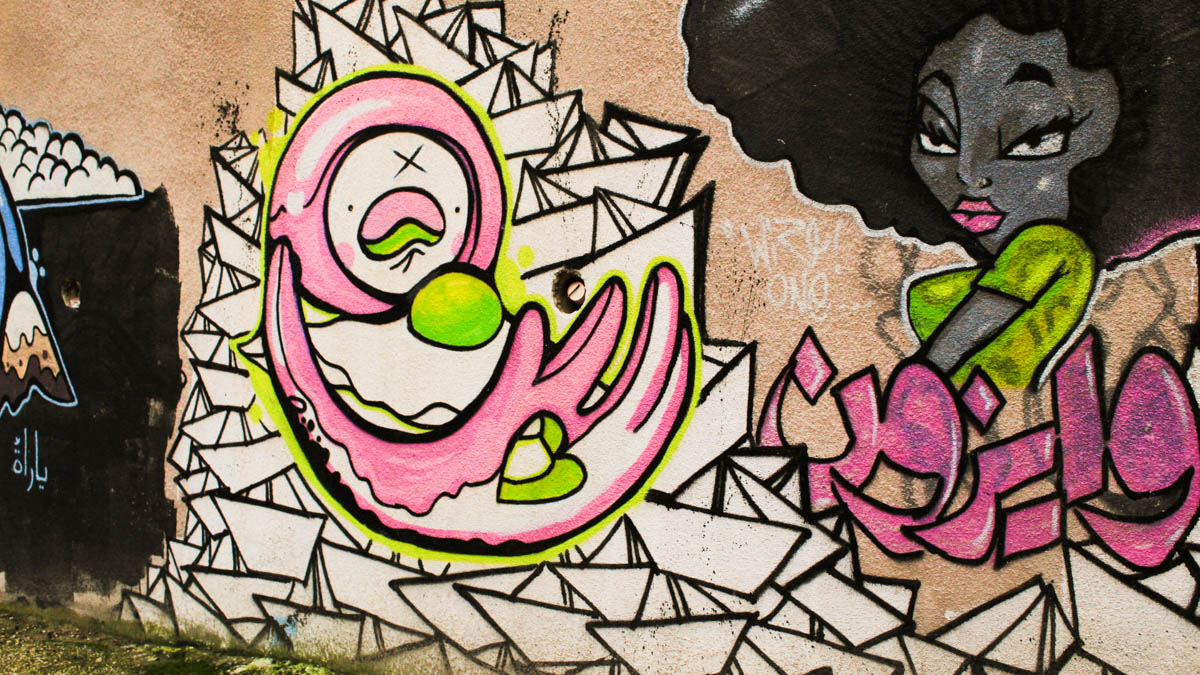 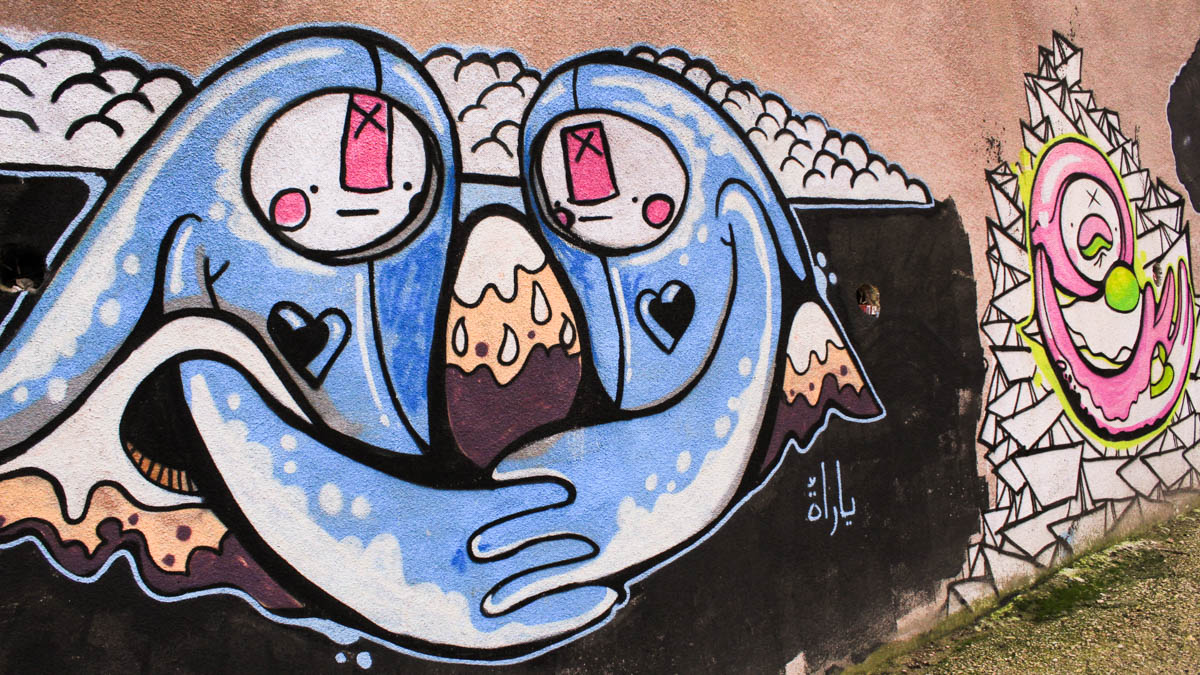 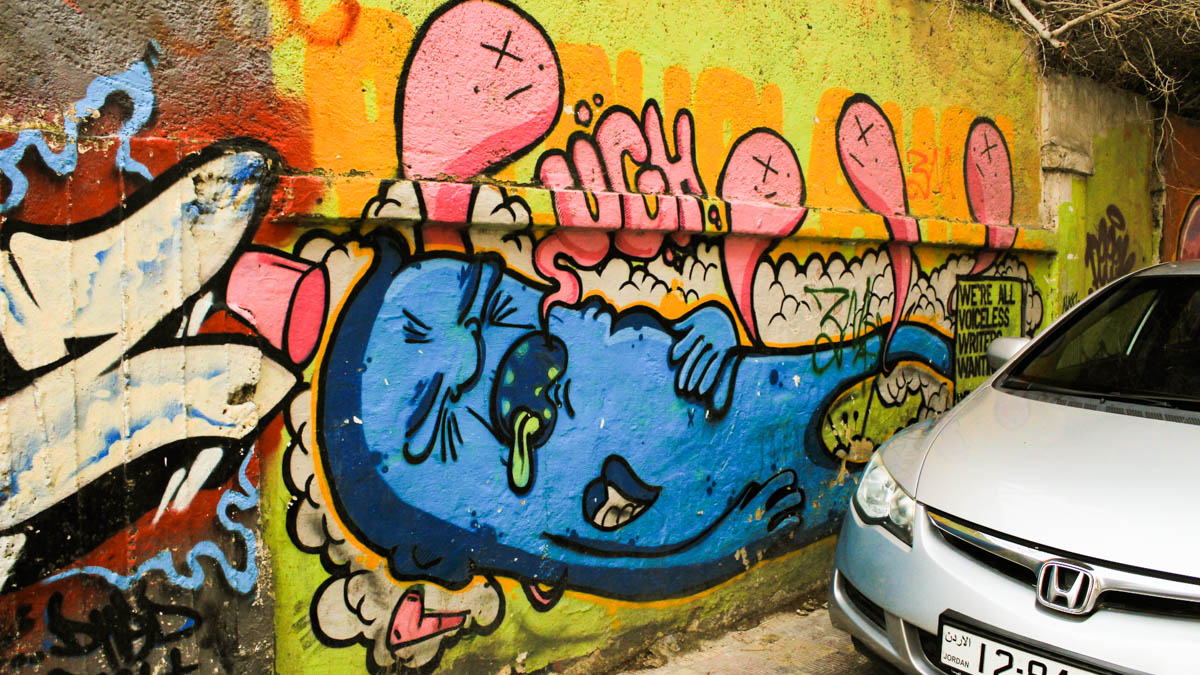 Sitting on handcrafted furniture in the artisan shop Art Tree in Jabal Amman, Yara Hindawi and I talk street art.

“I like the idea of this community behind graffiti and community behind street art,” she tells me, hands between her thighs to keep them warm from the biting Jordanian winter. Every Friday for the last four years or so, Hindawi and six other local artists wander around the city of Amman to spray paint their signature images on any empty wall or building face they can find.

This crew calls themselves the “Aerosol Mates” – a play on words between the aerosol cans of spray paint and “soulmates.” “It’s a little bit cheesy,” Hindawi laughs. “But I really like it, it’s cute.”

Being a part of this crew and practising art in general has been therapeutic for Hindawi, who suffers from various degrees of self-diagnosed depression and anxiety. Her personal perils with mental well-being are reflected in her art through the consistent themes of dreamy aloofness. Her characters often have hollowed eyes or hollowed hearts, floating lethargically on a bed of clouds, accompanied with bubble-lettered words like “lost” in English or “darkness” in Arabic.

Since she has dozens of pieces all over Amman, she’s also opening up this topic to public discourse. “Most of my work is introspective and a lot of work that I do touches on issues of mental health. Namely, [my art is] trying to break this idea that it’s taboo to talk about it in our culture,” she explains, adding that, “Saying you suffer from any sort of mental health issue is quite a taboo.”

The mental health stigma in Jordan and beyond

Hindawi is Jordanian-born but spent most of her life in the United Arab Emirates. She returned to Amman as an adult in 2015. She is now 30 years old and can say there are a lot of similarities across the Middle East when it comes to public discourse on mental health.

Though she’s yet to be seen by a mental health professional, she is fairly certain about her mental health status because it runs in her family. Her mother and some aunts have been clinically diagnosed with depression. A few of her cousins are living with bipolar disorder. 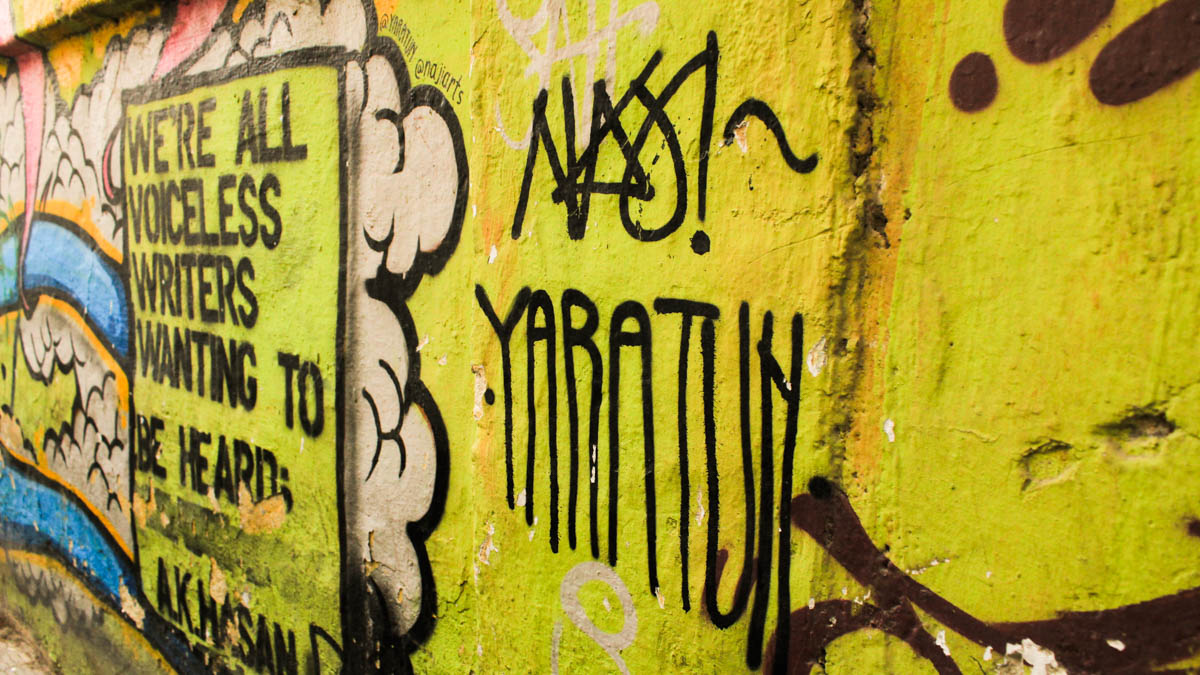 So Hindawi’s art is inspired not only by her own personal grapplings with mental health but the stories of the people closest to her, too. “Just hearing some of [my family members’] stories… the things they heard from psychiatrists and therapists were kind of shocking. [Or] being told by family members that they should keep quiet about their mental health because it’s not good for you and your reputation. You know, ‘How will you ever get married? Who will hire you?’ Things like that.” 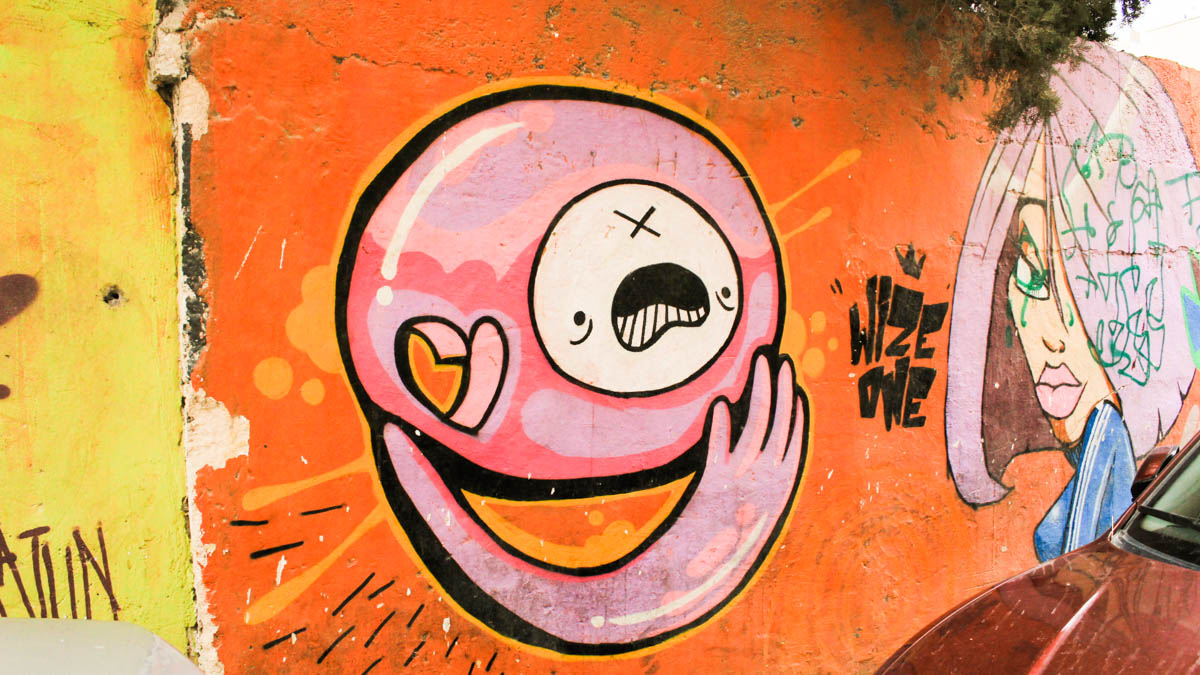 Yara’s drawings in the street of Jabal Amman.

Feeling like you’re not able to reach out for help can be deadly. Close to 800,000 people die each year by suicide – that’s one person every 40 seconds. Despite government or NGO intervention, a 2018 Jordanian Department of Statistics reported a steady increase in the country’s suicide rate over the past five years, totalling 605 individuals.

In 2008, the World Health Organization (WHO) recognized Jordan as a country “in need of intense support for strengthening the mental health system.” Strides were made, in collaboration with WHO, to better integrate mental health care into primary health care system and to build some community-based centers for psychosocial aid, but it is difficult to determine if this has had any lasting impact on the area of societal stigmatization.

Nearly 10 years after this WHO initiative, in 2017, a local chapter of an NGO called Life in My Days (LIMD) launched a mental illness awareness campaign – seemingly compelled to do so because of remaining societal issues.

“Nowadays, we are seeing a greater demand for mental health services and support in the Jordanian society,” Jordanian chapter of LIMB, Ala Abojaradeh, told The Jordan Times. “Unfortunately, the stigma surrounding mental illness makes it almost impossible for individuals to seek treatment at the onset of their disease.”

Hindaiwi is passionate about ensuring people understand that mental health issues should be taken seriously and, if needed, that taking appropriate medication is okay. She was upset when “going against big pharma” started trending and people began claiming, “You can cure your depression with exercise and a few vitamins.”

“That’s such bullshit. It’s so dangerous!” she exclaimed. “There are a lot of strict regulations in making the products that are out on the market today that really help people cope with any mental health issues that they have if medicine is the route they’re going to take.” 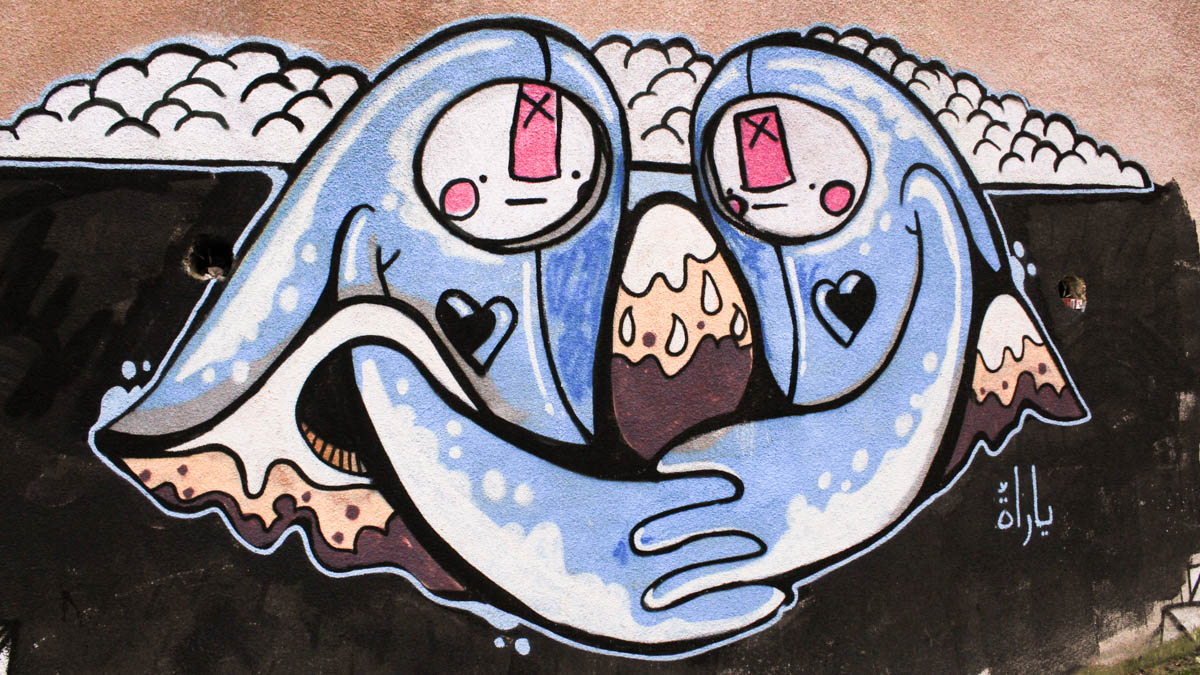 The degree to which an individual experiences mental health issues – such as depression or anxiety – will determine what the best form of treatment should be. For more severe cases, medication is proven to be more effective when coupled with cognitive-behavioural therapy (CBT). For less severe cases, CBT can wield results with or without medication.

There might be dozens of psycho-therapists in Amman today, but “You’re not necessarily going to find that doctor in Jordan so easily that is going to open-minded. Who’s not going to say ‘I’m not going to treat you because I don’t agree with your lifestyle.’” What if the source of a young Jordanian’s depression or anxiety is from their closeted homosexuality? Or family pressures for an undesired marriage? Hindawi admits she has yet to seek professional help primarily for this reason – who will understand her unique, Arab-millenial, transcontinental, progressive lifestyle?

“It could even be something as simple as constantly being told that you’re lazy,” she gave as an example of doctors or family members dismissing potential mental health sufferings, “when it might be anxiety that’s stopping you from being able to do anything in your life.”

“I think it’d be nice if more people were aware of not just the disorder but the symptoms of the disorder and that that’s okay,” she continued. “It’s not something to be ashamed of. It’s something you can live with. You can change if you want to or accept it as a part of you.”

Thankfully, Hindawi does believe things are getting better. “People are so much more open about it… I would say over the past couple of years it has become more and more common that people are talking about this openly without being ashamed.”

Transforming as an artist

Yaratun has branded herself with her cartoon-style artistry. Bubble letters and sunset colors will still be an emblematic part of her illustrations, but she does want to branch out into themes other than mental well-being. “Or maybe no theme at all,” she said pointedly, “just to not get stuck or pigeonhole myself, you know.”

Recent pieces of hers have touched on gender issues, particularly the marginalization and violence against women in Jordanian society – though they’ve only been published on her Instagram, being a bit too political for the average Amman building-side.

One drawing, in particular, received heavy responses. A veiled woman with the typical Yaratun-style hollowed eyes but, this time, dripping with blood and punctured with the phrase “You took out our eyes” in Arabic. This image was in response to the tragic incident that took place in Jordan last November when a man gouged his wife’s eyes out in front of her children, causing her to become permanently blind. 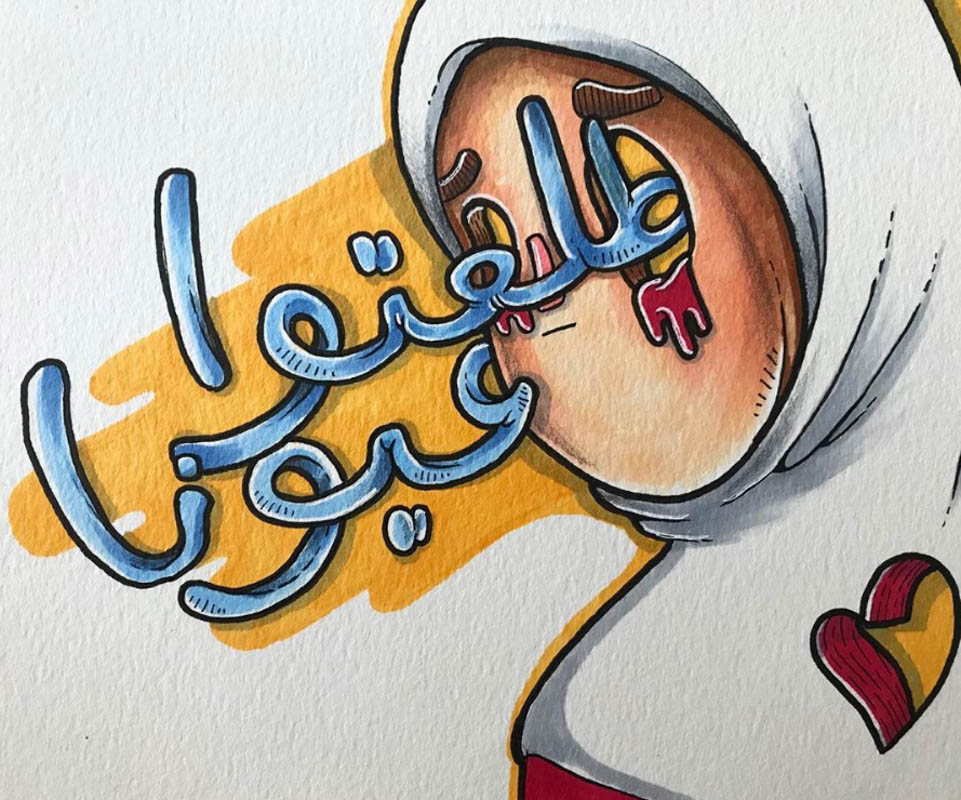 One of Yara’s drawings representing domestic abuse towards women. Taken from Yara’s Instagram.

Much like her use of street art to open public discourse, Hindawi uses her Instagram to raise awareness about pressing issues that are all too often hushed in Jordanian society. “In Jordan, incidents of domestic abuse are considered private matters to be solved between the married couple,” she writes on the post accompanying her gut-punching drawing. “Women are silenced when speaking out or asking for help in these situations.”

“It’s now more than ever important to break the silence and speak out against domestic abuse and gender-based violence. We shouldn’t wait until our eyes are torn out of our heads to say that ‘enough is enough’!”

In general, moving from traditional ink and paper to large, concrete walls has transformed Hindawi as an artist. At first, it was a bit of a struggle. “I kept hearing things from people, ‘Why don’t you draw this? What does this mean? Is that relevant? Do people want to see that?’”

“It’s made me cynical on one side, of course. Like, what’s it to you, this is my subject matter and this is what I draw.” One thing is for sure, she explained to me, is that she does not like people messing with her artistic expression.

“But on the other side… Yeah, it’s not my community that I’m drawing in or my neighborhood. I’m coming here and imposing my colors and my theme and my topics and my characters on them and they’re the ones who have to look at it every day.” This is why she sticks to posting her more “controversial” images just on her Instagram.

Overall, Hindawi believes she’s making a positive impact on Amman. “For some artists to come and paint a few walls that were considered drab or might have had a few scribbles and dirt on it, the neighborhood might get a bit excited about that.” She says she receives a lot of positive comments about her art. If not on a thematic level, then at least for making the streets of Amman a more bright and colorful place. 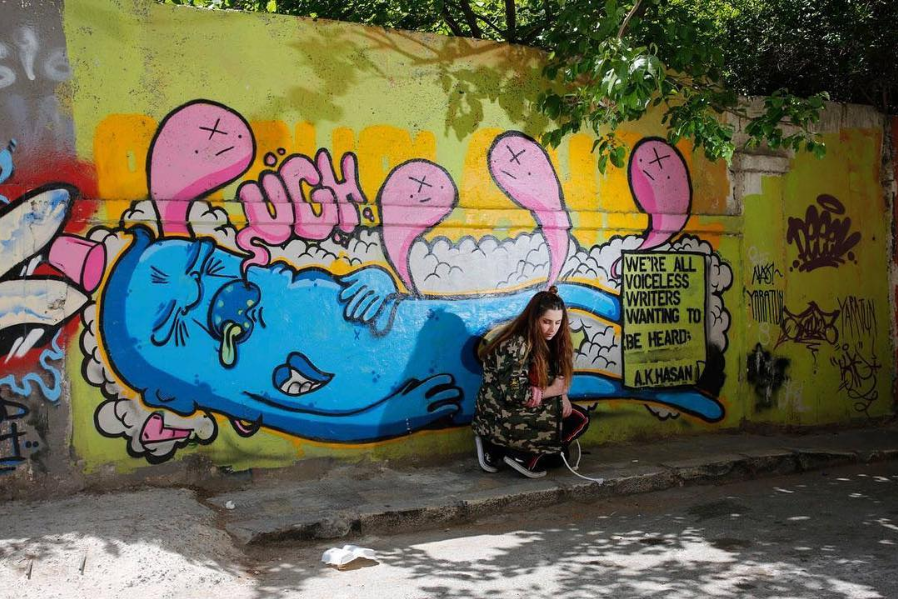 Yara in front of one of her pieces. Taken from her Instagram. 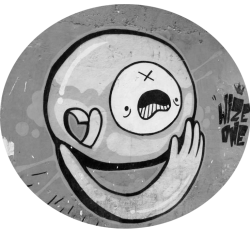 Yara Hindawi is an artist from Amman, Jordan, that focuses on creating cartoon-like characters inspired by different issues, particularly mental health. Her work can be seen covering the streets of Amman spraypainted around the town. She especially focuses on topics about mental health as she also suffers from her own mental health issues; it also runs in the family. She aspires to change the stigma people have about mental illness within the Arab world and hoped for a better future for the region in this department.